Comments (0)
Add to wishlistDelete from wishlist
Cite this document
Summary
The judiciary is the arm of the government which is dedicated to protecting the fundamental rights that are defined in the constitution. This research paper "The Puerto Rico Judiciary: A Model State System" will employ several current court systems to develop Puerto Rico’s system…
Download full paperFile format: .doc, available for editing
HIDE THIS PAPERGRAB THE BEST PAPER98.8% of users find it useful 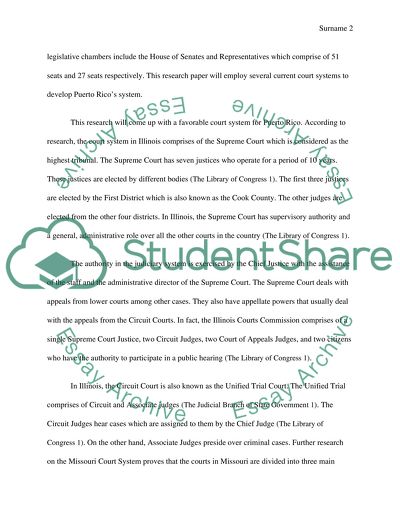 Download file to see previous pages In general, the country is mountainous and also has 17 lakes, all of which are man-made lakes. Puerto Rico is located close to the tropics, therefore; they experience an average temperature of 28 °C. Furthermore, Puerto Rico has become home to numerous individuals who have immigrated from the Dominican Republic. According to the Census Bureau in the U.S., the inhabitants of Puerto Rico were estimated to be 3,706,690 by 2011. Puerto Pico also has 78 municipalities, which are headed by mayors with the help of the municipal legislature (Rivera 1).
The judiciary is the arm of the government which is dedicated to protecting the fundamental rights that are defined in the constitution. In this case, Puerto Rico is considered as an independent commonwealth which is in union with the United States. The chief of state, in this case, is the President of the U.S. (The Judicial Branch of State Government 1). This system also consists of a head of government who is normally the governor. The judiciary system also comprises of two legislative chambers (The Judicial Branch of State Government 1). The legislative chambers include the House of Senates and Representatives which comprise of 51 seats and 27 seats respectively. This research paper will employ several current court systems to develop Puerto Rico’s system.
This research will come up with a favorable court system for Puerto Rico. According to research, the court system in Illinois comprises of the Supreme Court which is considered as the highest tribunal. The Supreme Court has seven justices who operate for a period of 10 years. These justices are elected by different bodies (The Library of Congress 1). The first three justices are elected by the First District which is also known as the Cook County. The other judges are elected from the other four districts. In Illinois, the Supreme Court has supervisory authority and a general, administrative role over all the other courts in the country (The Library of Congress 1).  ...Download file to see next pagesRead More
Share:
Tags
Cite this document
(“The Puerto Rico Judiciary: A Model State System Research Paper”, n.d.)
Retrieved de https://studentshare.org/law/1401151-create-a-court-system-for-the-newly-created-state

CHECK THESE SAMPLES OF The Puerto Rico Judiciary: A Model State System

In order to compare the welfare system of the three proposed countries, it is important to first develop a comparative method that would guide in comparing the three states. For the purpose of this paper, a binary comparison would be conducted. The implicit comparison would deal with Britain while the explicit comparison would explore the USA and Canada. Thereby a small N’ study would be used, that is, of three countries.
The three countries selected to share a similarity in the form that these countries are a welfare state. This is when welfare is mainly funded by the state. While the USA and Canada focus on the liberal welfare state, the welfare state of the UK is not quite defined.
The comparison of the welfare...
8 Pages(2000 words)Term Paper
sponsored ads
Save Your Time for More Important Things
Let us write or edit the research paper on your topic "The Puerto Rico Judiciary: A Model State System" with a personal 20% discount.
GRAB THE BEST PAPER

Let us find you another Research Paper on topic The Puerto Rico Judiciary: A Model State System for FREE!