Comments (0)
Add to wishlistDelete from wishlist
Cite this document
Summary
The Corporations Act is an important legislation passed by the legislators that governs the companies in Australia.It deals with the issues of formation and operation of companies in line with the constitution of the company;determine responsibilities of officers,process of acquisitions,mergers and fundraising…
Download full paperFile format: .doc, available for editing
HIDE THIS PAPERGRAB THE BEST PAPER97.7% of users find it useful 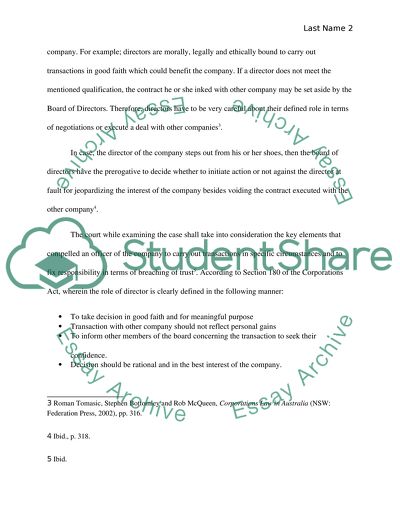 Download file to see previous pages ision in good faith and for meaningful purpose Transaction with other company should not reflect personal gains To inform other members of the board concerning the transaction to seek their confidence. Decision should be rational and in the best interest of the company. The above requirements are to be fulfilled by the directors in order to satisfy the statutory duty of care and due diligence6. Business judgment In accordance with the section 134 of the Corporations Act, the upper and the bottom layers of the management should respect the provisions of the Corporations Act and the constitution of the company. The company in its own discretion can have one or more replaceable rules contained in the Corporations Act in place of Constitution. In accordance with Section 140(1) (b) of the constitution and replaceable rules have the direct bearing on a Contract that executes between the company, each director and secretary. Under the mentioned scenario each one agrees to abide by the constitution and the rules in vogue7. Here we can take example of Turquand’s case, according to which, an agent belonging to the company can make a contract without any authority, which is not in knowledge of the outsider. A rule is settled that ensures the protection of outsiders until and unless the security of company is not at stake8. Another case Crabtree-Vickers Pty Ltd v Australian Direct Mail Advertising Co Pty Ltd can be taken as an example to show that a person who lacks actual authority cannot be entered into a contract on behalf of the company and prior approval is required for entering into a contract by some person having actual authority not apparent one9. Sixty-Fourth Throne Pty Ltd v Macquarie Bank Limited [1998] 3 VR 133 is another example where Kandy used authority of...
The Corporations Act is an important legislation passed by the legislators that governs the companies in Australia. It deals with the issues of formation and operation of companies in line with the constitution of the company; determine responsibilities of officers, process of acquisitions, mergers and fundraising.Directors should not deploy themselves in a critical position where they are unable to serve in the best interest of the organization. This inclusive of entering into commercial transactions with other entities where one cannot take decisive part in making a decision for the company. With regard to protect the rights of shareholders in case of oppressive changes in the Constitution by the Board of Directors, we may invoke the provision of section 994 of the Companies Act. According to which “A member of a company may apply to the court for an order on the ground that the company's affairs are being run or have been conducted in a manner that is unfairly prejudicial to the interests of its members generally or of some part of its members” .The mentioned section in fact protects the interest of the minority shareholders in circumstances where the majority shareholders act in a way which is detrimental to the interests of minority shareholders. Moreover, in view the effective role of the Central Bank of Malaysia and the Security Commission of Malaysia, the chances of jeopardizing the interest of shareholders are diminished. ...Download file to see next pagesRead More
Share:
Tags
Cite this document
(“Company law Essay Example | Topics and Well Written Essays - 2000 words - 2”, n.d.)
Company law Essay Example | Topics and Well Written Essays - 2000 words - 2. Retrieved from https://studentshare.org/law/1401095-company-law