Comments (0)
Add to wishlistDelete from wishlist
Cite this document
Summary
Organisational Law Case Study Part A In our problem, Su and Yana, the directors of the company Free Spirit Pty Ltd, had taken improper decisions such as to purchase the sports equipment from a company named Sporting Edge Pty Ltd. This company was owned and controlled by Yana and Su…
Download full paperFile format: .doc, available for editing
HIDE THIS PAPERGRAB THE BEST PAPER97.4% of users find it useful 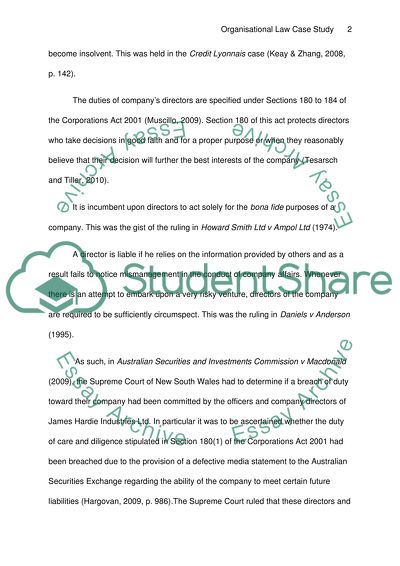 Download file to see previous pages This clearly indicates the intention of Yana and Su to promote their own company’s interests rather than the interests of Free Spirit Pty Ltd. Yana Yana is an executive director of the company. To determine whether she had fulfilled the obligations as a director, prescribed by the provisions of the Corporations Act 2001 and the common law, the following issues have been taken up for discussion. The Corporations Act 2001 requires directors to exercise due care and diligence during the discharge of their duties towards the company. This has been specified under Section 180 of this Act. Such due care entails protecting the interests of creditors and the interests of the shareholders when the company is expecting to become insolvent. This was held in the Credit Lyonnais case (Keay & Zhang, 2008, p. 142). The duties of company’s directors are specified under Sections 180 to 184 of the Corporations Act 2001 (Muscillo, 2009). Section 180 of this act protects directors who take decisions in good faith and for a proper purpose or when they reasonably believe that their decision will further the best interests of the company (Tesarsch and Tiller, 2010). It is incumbent upon directors to act solely for the bona fide purposes of a company. This was the gist of the ruling in Howard Smith Ltd v Ampol Ltd (1974). A director is liable if he relies on the information provided by others and as a result fails to notice mismanagement in the conduct of company affairs. Whenever there is an attempt to embark upon a very risky venture, directors of the company are required to be sufficiently circumspect. This was the ruling in Daniels v Anderson (1995). As such, in Australian Securities and Investments Commission v Macdonald (2009), the Supreme Court of New South Wales had to determine if a breach of duty toward their company had been committed by the officers and company directors of James Hardie Industries Ltd. In particular it was to be ascertained whether the duty of care and diligence stipulated in Section 180(1) of the Corporations Act 2001 had been breached due to the provision of a defective media statement to the Australian Securities Exchange regarding the ability of the company to meet certain future liabilities (Hargovan, 2009, p. 986).The Supreme Court ruled that these directors and officers of the company had breached their duty of care. In addition, the court also held the company in breach of its statutory obligations under the continuous disclosure provisions. A director has to comply with the requirements of the business judgement rule in order to obtain protection under Section 180 (2). As Yana had acted in a manner that was detrimental to the interests of the company, she cannot resort to such defence. She had purchased sports equipment at a higher price from her own company, and this clearly indicates the absence of loyalty and due care on the part of Yana. She has decided to expand the business of the company, Free Spirit Pty Ltd, to Alaska without assessing the legal and financial aspects of the company in that area in the future. Yana has breached the duties of good faith and due diligence, as per the provisions of the Corporations Act. She cannot evade liability for violation of the provisions of fiduciary duties of directors under the Corporations Act and common law. As per the decided case law, she is liable for breach of fiduciary duties, due care and diligence. Su Su is the finance director of the company Free Spirit Pty Lt ...Download file to see next pagesRead More
Share:
Tags
Cite this document
(“Organisation law case study Research Paper Example | Topics and Well Written Essays - 2500 words”, n.d.)
Organisation law case study Research Paper Example | Topics and Well Written Essays - 2500 words. Retrieved from https://studentshare.org/law/1401093-organisation-law-case-study
(Organisation Law Case Study Research Paper Example | Topics and Well Written Essays - 2500 Words)
Organisation Law Case Study Research Paper Example | Topics and Well Written Essays - 2500 Words. https://studentshare.org/law/1401093-organisation-law-case-study.
“Organisation Law Case Study Research Paper Example | Topics and Well Written Essays - 2500 Words”, n.d. https://studentshare.org/law/1401093-organisation-law-case-study.
Comments (0)
Click to create a comment or rate a document

In th...
8 Pages(2000 words)Case Study
sponsored ads
Save Your Time for More Important Things
Let us write or edit the research paper on your topic "Organisation law case study" with a personal 20% discount.
GRAB THE BEST PAPER

Let us find you another Research Paper on topic Organisation law case study for FREE!