Comments (0)
Add to wishlist Delete from wishlist
Cite this document
Summary
Name: Tutor: Course: Date: Business Law Section A 1. (a). the grounds for action – open to the passengers of Lancung transit agency can be deduced from the bus and passenger guidelines on accident prevention. Some of the guidelines were formulated by the U.S department of transport and administration agents on research and special programs –which are responsible for the formulation of guidelines on accident prevention, both among transit agency staff and passengers…
Download full paper File format: .doc, available for editing
HIDE THIS PAPERGRAB THE BEST PAPER96% of users find it useful 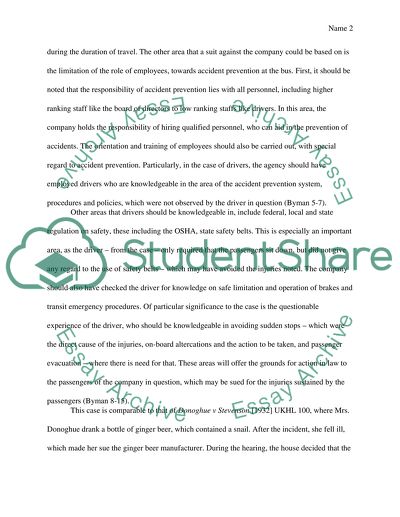 Download file to see previous pages The second area of grounds for action is the failure of the transit agency, with regards to assigning a staff member, who would oversee the safety measures to be observed while using the buses owned by the company. Further, the roles of the safety director should be clearly stated. From the case of the Lancung bus, it is apparent that the driver took the responsibility for safety, by refraining the dancing of the passengers at the bus, which was not enough to maintain safety during the duration of travel. The other area that a suit against the company could be based on is the limitation of the role of employees, towards accident prevention at the bus. First, it should be noted that the responsibility of accident prevention lies with all personnel, including higher ranking staff like the board of directors to low ranking staffs like drivers. In this area, the company holds the responsibility of hiring qualified personnel, who can aid in the prevention of accidents. The orientation and training of employees should also be carried out, with special regard to accident prevention. Particularly, in the case of drivers, the agency should have employed drivers who are knowledgeable in the area of the accident prevention system, procedures and policies, which were not observed by the driver in question (Byman 5-7). Other areas that drivers should be knowledgeable in, include federal, local and state regulation on safety, these including the OSHA, state safety belts. This is especially an important area, as the driver – from the case – only required that the passengers sit down, but did not give any regard to the use of safety belts – which may have avoided the injuries noted. The company should also have checked the driver for knowledge on safe limitation and operation of brakes and transit emergency procedures. Of particular significance to the case is the questionable experience of the driver, who should be knowledgeable in avoiding sudden stops – which were the direct cause of the injuries, on-board altercations and the action to be taken, and passenger evacuation – where there is need for that. These areas will offer the grounds for action in law to the passengers of the company in question, which may be sued for the injuries sustained by the passengers (Byman 8-15). This case is comparable to that of Donoghue v Stevenson [1932] UKHL 100, where Mrs. Donoghue drank a bottle of ginger beer, which contained a snail. After the incident, she fell ill, which made her sue the ginger beer manufacturer. During the hearing, the house decided that the manufacturer had failed to exercise their duty of care to her – as a customer of their beer. Therefore, it was noted that there was the breach of that duty of care, as the manufacturer’s failure to check the safety of the product had caused her harm. In the same line, the case of Lancung transit shows a case of breach of the duty of care, as the company, according to its accident prevention program – should have ensured that the safety of all the passengers was maintained at maximum. An example of the duties of care breached include requiring the ...Download file to see next pages Read More
Share:
Tags
Cite this document
(“Business law Essay Example | Topics and Well Written Essays - 2750 words”, n.d.)
Retrieved from https://studentshare.org/law/1400219-business-law

The Census Bur...
6 Pages (1500 words) Assignment
sponsored ads
Save Your Time for More Important Things
Let us write or edit the essay on your topic "Business law" with a personal 20% discount.
GRAB THE BEST PAPER