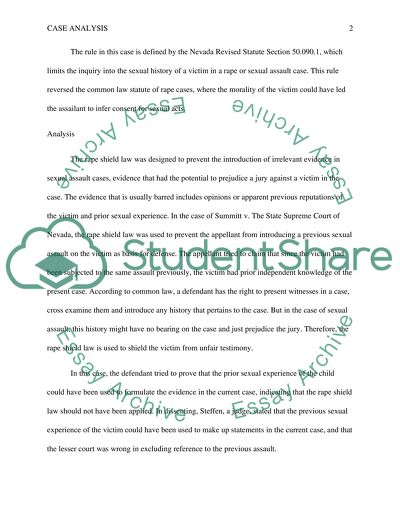 Extract of sample "Summit vs. State Supreme Court of Nevada (1985)"

Download file to see previous pages This testimony was offered by the appellant by stating that the victim had previous knowledge of similar acts that formed a foundation for the current case. Summitt was convicted by the grand jury, and the current case is an appeal on grounds of the rape shield law under FRE 412. Issue The issue before the court in the current case is whether the rape shield law allowed the admission of prior sexual experience of the victim as evidence in the case. The court had to determine whether Summitt could introduce the prior sexual experience of his victim as a basis for his defense in the appeal of his conviction. Rule The rule in this case is defined by the Nevada Revised Statute Section 50.090.1, which limits the inquiry into the sexual history of a victim in a rape or sexual assault case. This rule reversed the common law statute of rape cases, where the morality of the victim could have led the assailant to infer consent for sexual acts. Analysis The rape shield law was designed to prevent the introduction of irrelevant evidence in sexual assault cases, evidence that had the potential to prejudice a jury against a victim in the case. The evidence that is usually barred includes opinions or apparent previous reputations of the victim and prior sexual experience. In the case of Summitt v. The State Supreme Court of Nevada, the rape shield law was used to prevent the appellant from introducing a previous sexual assault on the victim as basis for defense. The appellant tried to claim that since the victim had been subjected to the same assault previously, the victim had prior independent knowledge of the present case. According to common law, a defendant has the right to present witnesses in a case, cross examine them and introduce any history that pertains to the case. But in the case of sexual assault, this history might have no bearing on the case and just prejudice the jury. Therefore, the rape shield law is used to shield the victim from unfair testimony. In this case, the defendant tried to prove that the prior sexual experience of the child could have been used to formulate the evidence in the current case, indicating that the rape shield law should not have been applied. In dissenting, Steffen, a judge, stated that the previous sexual experience of the victim could have been used to make up statements in the current case, and that the lesser court was wrong in excluding reference to the previous assault. Conclusion The decision in the case to reverse the prior ruling and remand the case for a new trial was based on the error by the district court in not admitting the prior sexual experience of the victim in the case. This means that the rape shield law can sometimes act unfavorably for the defendant, since the victim could have prior knowledge that might have bearing in the current case. Discussion The rule in this case impacts different rape and sexual cases. From the decision, it is seen that the rape shield law can be circumvented by a jury if it is evident that the defendant needs the prior sexual experience of the victim in his case. Question 2 Facts Martin Weil unexpectedly passed away, and on investigation, his doctors could not explain the cause of death or the cause of several medical complications that he experienced before his death. One ...Download file to see next pagesRead More
Share:
Tags
Cite this document
(“Summit vs. State Supreme Court of Nevada (1985) Essay”, n.d.)
Retrieved from https://studentshare.org/law/1399702-midterm-essay
(Summit Vs. State Supreme Court of Nevada (1985) Essay)
https://studentshare.org/law/1399702-midterm-essay.
“Summit Vs. State Supreme Court of Nevada (1985) Essay”, n.d. https://studentshare.org/law/1399702-midterm-essay.
Comments (0)
Click to create a comment or rate a document

CHECK THESE SAMPLES OF Summit vs. State Supreme Court of Nevada (1985)

Though the existence of the state can be felt in different walks of everyday life, yet it is an intangible whose nature is impossible to grasp. As a political institution, state embodies the concept of sovereignty. Devetak (2007) describes it as a political unit or a country that possesses sovereignty. State can thus be described as a single, unified whole confined within territorial borders. The state is built in a core geographical area with allowances to a certain extent on the boundaries. According to Strayer (1970), a state exists in the hearts and minds of the people. The collective personality of the state renders it immortal. The state is a multi-faced concept that is fuzzy around its edges. Consequently, we cannot develop...
6 Pages(1500 words)Essay
sponsored ads
Save Your Time for More Important Things
Let us write or edit the essay on your topic "Summit vs. State Supreme Court of Nevada (1985)" with a personal 20% discount.
GRAB THE BEST PAPER

Let us find you another Essay on topic Summit vs. State Supreme Court of Nevada (1985) for FREE!