Comments (0)
Add to wishlistDelete from wishlist
Cite this document
Summary
Intellectual Property Law Date Intellectual Property Law Part A Introduction Generally, intellectual property law is an area of law that has been designed to protect the rights of individuals or institutions who develop original works…
Download full paperFile format: .doc, available for editing
HIDE THIS PAPERGRAB THE BEST PAPER96% of users find it useful 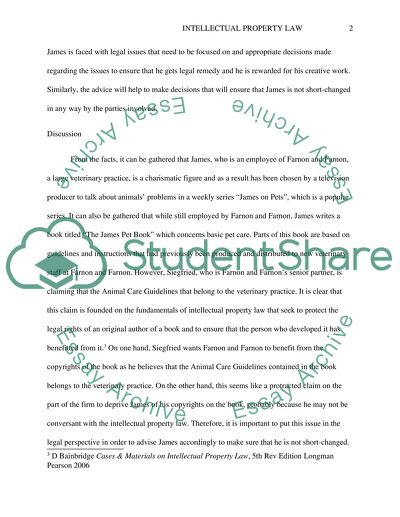 Download file to see previous pages This law provides a framework for protection of legal rights of artists, traders, inventors, and writers among other people and institution that create original works. The main purpose of intellectual property law is to encourage inventions, artistic expressions, and new technologies, which are critical ingredients for economic growth. It is informed by the fact that when people know that their creative works will be protected and there is a great possibility of benefitting from their works, they are more likely to enhance their capacities to produce things that develop new technology, create beauty in the world, make processes more effective and efficient, and create jobs.2 This part of the paper will focus on intellectual property law; in particular, it will focus on a scenario that brings out the aspects of copyright which is covered under the intellectual property law. The paper will seek to advise James on various issues that relate to copyright law. James is faced with legal issues that need to be focused on and appropriate decisions made regarding the issues to ensure that he gets legal remedy and he is rewarded for his creative work. Similarly, the advice will help to make decisions that will ensure that James is not short-changed in any way by the parties involved. Discussion From the facts, it can be gathered that James, who is an employee of Farnon and Farnon, a large veterinary practice, is a charismatic figure and as a result has been chosen by a television producer to talk about animals’ problems in a weekly series “James on Pets”, which is a popular series. It can also be gathered that while still employed by Farnon and Farnon, James writes a book titled “The James Pet Book” which concerns basic pet care. Parts of this book are based on guidelines and instructions that had previously been produced and distributed to new veterinary staff at Farnon and Farnon. However, Siegfried, who is Farnon and Farnon’s senior partner, is claiming that the Animal Care Guidelines that belong to the veterinary practice. It is clear that this claim is founded on the fundamentals of intellectual property law that seek to protect the legal rights of an original author of a book and to ensure that the person who developed it has benefitted from it.3 On one hand, Siegfried wants Farnon and Farnon to benefit from the copyrights of the book as he believes that the Animal Care Guidelines contained in the book belongs to the veterinary practice. On the other hand, this seems like a protracted claim on the part of the firm to deprive James of his copyrights on the book, probably because he may not be conversant with the intellectual property law. Therefore, it is important to put this issue in the legal perspective in order to advise James accordingly to make sure that he is not short-changed. Firstly, it is important to understand what the intellectual property law says about copyright. The James’ situation falls under the copyright; a main area under the intellectual property rights. Copyright applies to works which are recorded in some manner: copyright exists in things or items such as dramatic, literary, musical, and artistic works, as well as typographical arrangements, films, and sound recordings. Copyright gives the author particular rights that relate to the work, and prohibit actions that are unauthorized. Besides, copyright allows the ...Download file to see next pagesRead More
Share:
Tags
Cite this document
(“Intellectual Property Law Essay Example | Topics and Well Written Essays - 3000 words - 1”, n.d.)
Intellectual Property Law Essay Example | Topics and Well Written Essays - 3000 words - 1. Retrieved from https://studentshare.org/law/1399292-intellectual-property-law
(Intellectual Property Law Essay Example | Topics and Well Written Essays - 3000 Words - 1)
Intellectual Property Law Essay Example | Topics and Well Written Essays - 3000 Words - 1. https://studentshare.org/law/1399292-intellectual-property-law.
“Intellectual Property Law Essay Example | Topics and Well Written Essays - 3000 Words - 1”, n.d. https://studentshare.org/law/1399292-intellectual-property-law.
Comments (0)
Click to create a comment or rate a document

In th...
8 Pages(2000 words)Case Study
sponsored ads
Save Your Time for More Important Things
Let us write or edit the essay on your topic "Intellectual Property Law" with a personal 20% discount.
GRAB THE BEST PAPER

Let us find you another Essay on topic Intellectual Property Law for FREE!