Comments (0)
Add to wishlistDelete from wishlist
Cite this document
Summary
Commerce in the Land of the Middle Kingdom: Intricacies, caused by culture, and values, of conducting business in China University Name No statistical data or research is required to realize that China is one of the world’s fastest growing economies…
Download full paperFile format: .doc, available for editing
HIDE THIS PAPERGRAB THE BEST PAPER94.8% of users find it useful 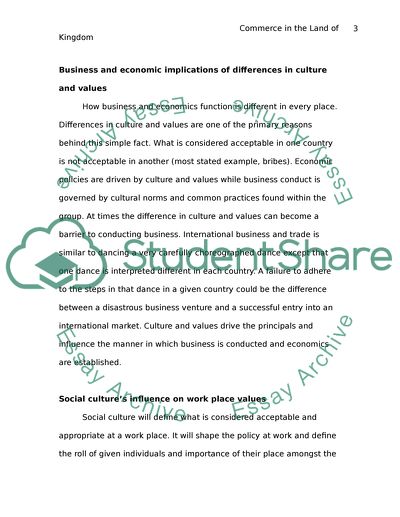 Extract of sample "Commerce law in the land of Middle Kingdom"

Download file to see previous pages In order to successfully conduct business in China, the IBs must traverse a, at times, thorny path of ethical and social culture challenges. Elements that influence Differences in Social Culture Values, and ethics drive what shape the social culture of given country will be in. Culture is a collection of widely accepted values, ethics, and beliefs held by the group. For example, Chinese culture is very heavily influenced by Confucius beliefs and values of collectivism, group over individualism. Chinese culture takes a very hierarchical structure of social life, cultivation of morality and self-restraint, and the emphasis on hard work and achievement (Fogel, 2010). With each country, place or group, these elements change which results in a variation or difference in social culture. However as time goes by, whether through external factors or driven by necessities of survival, these values, beliefs and ethics will evolve which will result in a change within the social culture. Business and economic implications of differences in culture and values How business and economics function is different in every place. Differences in culture and values are one of the primary reasons behind this simple fact. What is considered acceptable in one country is not acceptable in another (most stated example, bribes). Economic policies are driven by culture and values while business conduct is governed by cultural norms and common practices found within the group. At times the difference in culture and values can become a barrier to conducting business. International business and trade is similar to dancing a very carefully choreographed dance except that one dance is interpreted different in each country. A failure to adhere to the steps in that dance in a given country could be the difference between a disastrous business venture and a successful entry into an international market. Culture and values drive the principals and influence the manner in which business is conducted and economics are established. Social culture’s influence on work place values Social culture will define what is considered acceptable and appropriate at a work place. It will shape the policy at work and define the roll of given individuals and importance of their place amongst the ranks, as well as guidelines for conducting business. Given the hierarchical nature of Chinese culture, the rank of an individual employee plays a very important role within the organization (Fogel, 2010). Social culture and aspects of social life norms will also influence how business is conducted on the domestic and international stage. The principal of Guanxi – concept of drawing on connections – is an important aspect of Chinese culture. It’s based on the principal of creating a personal network on the basis of favors, associations (belonging to the same trade association or group) and other social connections (same city of origin, close association through years of working together). At times companies have been unable to conduct business with some form of guanxi. Luo (2007, p 7) talks about how cosmetics manufacturer Avon, initially, unable to convince the Chinese government about the viability of its direct marketing method, requested the assistance of Hong Kong’s Bank of East Asia director David Li. Li is known for having a very well known and influential guanxi with ties into the central Chinese government, which he used to assist Avon in establishing a communication link and push through a deal between Avon and ...Download file to see next pagesRead More
Share:
Tags
Cite this document
(“Commerce law in the land of Middle Kingdom Research Paper”, n.d.)
Retrieved from https://studentshare.org/law/1399042-see-instructions
(Commerce Law in the Land of Middle Kingdom Research Paper)
https://studentshare.org/law/1399042-see-instructions.
“Commerce Law in the Land of Middle Kingdom Research Paper”, n.d. https://studentshare.org/law/1399042-see-instructions.
Comments (0)
Click to create a comment or rate a document

In th...
8 Pages(2000 words)Case Study
sponsored ads
Save Your Time for More Important Things
Let us write or edit the research paper on your topic "Commerce law in the land of Middle Kingdom" with a personal 20% discount.
GRAB THE BEST PAPER

Let us find you another Research Paper on topic Commerce law in the land of Middle Kingdom for FREE!