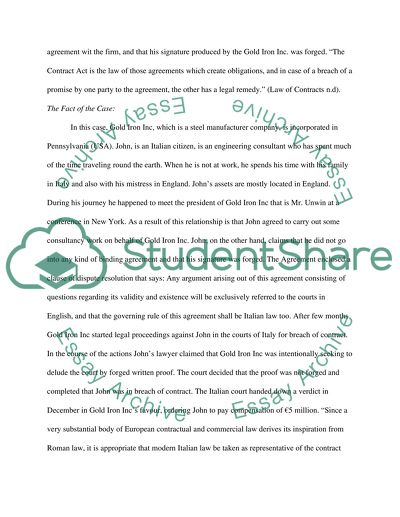 Download file to see previous pages Contract and business law are increasingly composite and at the present they affect every industry and all types of commercial contract; from entering into an agreement, to ensure the validity of purchase circumstances. A contract law is generally an agreement enforceable through law. For the legal contract law to become legal, it must satisfy certain legal necessities. There are various courses of contracts which, though ideal so far it relates to structure, consideration and contract, are not specified. All the agreements are deemed to be contracts, if the agreements are prepared by the free consent of the parties, capable to contract, for a legal consideration with a legal objective, and are not specifically declared as invalid. The following are considered as the necessary elements of a valid contract: agreement, intention to create a legal relationship, free and genuine consent, and parties competent to contract, legal consideration, legal object, agreements not declared void or illegal, certainty of meaning, possibility of performance and the necessary legal formalities. In this particular problem scenario, there is no written agreement among the parties to the agreement so this is not a valid contract. As a case in point, John is not liable to pay compensation to Gold Iron Inc. As he, John John, claims that he did not enter into any binding agreement wit the firm, and that his signature produced by the Gold Iron Inc. was forged. “The Contract Act is the law of those agreements which create obligations, and in case of a breach of a promise by one party to the agreement, the other has a legal remedy.” (Law of Contracts n.d). The Fact of the Case: In this case, Gold Iron Inc, which is a steel manufacturer company, is incorporated in Pennsylvania (USA). John, is an Italian citizen, is an engineering consultant who has spent much of the time traveling round the earth. When he is not at work, he spends his time with his family in Italy and also with his mistress in England. John’s assets are mostly located in England. During his journey he happened to meet the president of Gold Iron Inc that is Mr. Unwin at a conference in New York. As a result of this relationship is that John agreed to carry out some consultancy work on behalf of Gold Iron Inc. John, on the other hand, claims that he did not go into any kind of binding agreement and that his signature was forged. The Agreement enclosed a clause of dispute resolution that says: Any argument arising out of this agreement consisting of questions regarding its validity and existence will be exclusively referred to the courts in English, and that the governing rule of this agreement shall be Italian law too. After few months Gold Iron Inc started legal proceedings against John in the courts of Italy for breach of contract. In the course of the actions John’s lawyer claimed that Gold Iron Inc was intentionally seeking to delude the court by forged written proof. The court decided that the proof was not forged and completed that John was in breach of contract. The Italian court handed down a verdict in December in Gold Iron Inc’s favour, ordering John to pay compensation of €5 million. “Since a very substantial body of European contractual and commercial law derives its inspiration from Roman law, it is appropriate that modern Italian law be taken as representative of the contract and commercial law ...Download file to see next pagesRead More
Share:
Tags
Cite this document
(“International Corporate and Contract law Essay Example | Topics and Well Written Essays - 3750 words”, n.d.)
Retrieved from https://studentshare.org/law/1398777-international-corporate-and-contract-law
(International Corporate and Contract Law Essay Example | Topics and Well Written Essays - 3750 Words)
https://studentshare.org/law/1398777-international-corporate-and-contract-law.
“International Corporate and Contract Law Essay Example | Topics and Well Written Essays - 3750 Words”, n.d. https://studentshare.org/law/1398777-international-corporate-and-contract-law.
Comments (0)
Click to create a comment or rate a document

CHECK THESE SAMPLES OF International Corporate and Contract law

As a matter of fact, Hoffman’s statement that “international affairs is the nemesis of liberalism” has a grain of truth in it and this is especially so after the 9/11 incident.
There are two schools of thought or perspectives that are used to view international affairs: liberalism and realism. The study of these two perspectives is significant to the idea posed by Stanley Hoffman because they determine the reasons why international affairs, according to him, does not only see eye-to-eye with liberalism but seems to stand on the opposing side of it.
Liberalism can be defined as having four elements: citizens; the legislature; property rights, and; a market-driven economy (Dunne 186). Realism, on the othe...
6 Pages(1500 words)Assignment
sponsored ads
Save Your Time for More Important Things
Let us write or edit the essay on your topic "International Corporate and Contract law" with a personal 20% discount.
GRAB THE BEST PAPER

Let us find you another Essay on topic International Corporate and Contract law for FREE!