Comments (0)
Add to wishlist Delete from wishlist
Cite this document
Summary
CONTRACT LAW Name of Institution Date Contract Law Contract law stipulates that parties to a contract should face liability if they breach the contract. Generally, a contract dictates that a party has a duty to perform certain duty under the contract, and therefore if he does not perform should face liability (Fafinski and Finch, 2009, p…
Download full paper File format: .doc, available for editing
HIDE THIS PAPERGRAB THE BEST PAPER97.4% of users find it useful 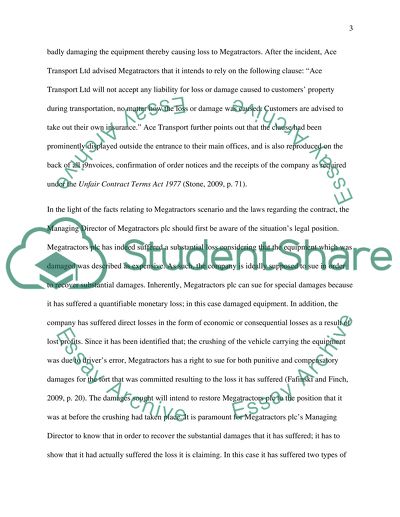 Download file to see previous pages Since a breach of contract implies that one of the parties to a contract has suffered a loss or injuries, the law requires that the other party pay for damages to the injured party. Award of damages to the injured party is the major remedy which is available at common law for breach of contract. In general terms, damages refer to the monetary sum that is determined by the court in order to compensate the injured party. Damages intend to restore the injured party to his previous financial position (Beatson and Burrows and Cartwright, 2010, p. 39). In the scenario presented, Megatractors plc has suffered loss as a result of the crashing of the vehicle which was carrying its equipment. Megatractors plc had contracted the services of the Ace Transport Ltd to transport an expensive harvester to a customer, Home Farms (Flempton) Ltd. Since Ace Transport Ltd had provided similar services to Megatractors for a number of years, the latter was convinced that the former will perform its duty as per the contract. However, this did not happen as the driver’s error caused the vehicle carrying the equipment to crush and badly damaging the equipment thereby causing loss to Megatractors. After the incident, Ace Transport Ltd advised Megatractors that it intends to rely on the following clause: “Ace Transport Ltd will not accept any liability for loss or damage caused to customers’ property during transportation, no matter how the loss or damage was caused. Customers are advised to take out their own insurance.” Ace Transport further points out that the clause had been prominently displayed outside the entrance to their main offices, and is also reproduced on the back of all i9nvoices, confirmation of order notices and the receipts of the company as required under the Unfair Contract Terms Act 1977 (Stone, 2009, p. 71). In the light of the facts relating to Megatractors scenario and the laws regarding the contract, the Managing Director of Megatractors plc should first be aware of the situation’s legal position. Megatractors plc has indeed suffered a substantial loss considering that the equipment which was damaged was described as expensive. As such, the company is ideally supposed to sue in order to recover substantial damages. Inherently, Megatractors plc can sue for special damages because it has suffered a quantifiable monetary loss; in this case damaged equipment. In addition, the company has suffered direct losses in the form of economic or consequential losses as a result of lost profits. Since it has been identified that; the crushing of the vehicle carrying the equipment was due to driver’s error, Megatractors has a right to sue for both punitive and compensatory damages for the tort that was committed resulting to the loss it has suffered (Fafinski and Finch, 2009, p. 20). The damages sought will intend to restore Megatractors plc to the position that it was at before the crushing had taken place. It is paramount for Megatractors plc’s Managing Director to know that in order to recover the substantial damages that it has suffered; it has to show that it had actually suffered the loss it is claiming. In this case it has suffered two types of losses: incidental loss due to the damaged equipment caused by driver’ ...Download file to see next pages Read More
Share:
Tags
Cite this document
(“Contract law Essay Example | Topics and Well Written Essays - 1500 words”, n.d.)
Retrieved from https://studentshare.org/law/1398703-contract-law

In th...
8 Pages (2000 words) Case Study
sponsored ads
Save Your Time for More Important Things
Let us write or edit the essay on your topic "Contract law" with a personal 20% discount.
GRAB THE BEST PAPER

Let us find you another Essay on topic Contract law for FREE!