Comments (0)
Add to wishlist Delete from wishlist
Cite this document
Summary
Acceptance of an Offer Institution Date Contract Law Introduction Evidently through a definition perception, a contract is an accord which forms rise to requirements that are imposed by law. The aspect, which differentiates contractual from other contracts, is that they are founded on the accord of the constricting parties…
Download full paper File format: .doc, available for editing
HIDE THIS PAPERGRAB THE BEST PAPER97.2% of users find it useful 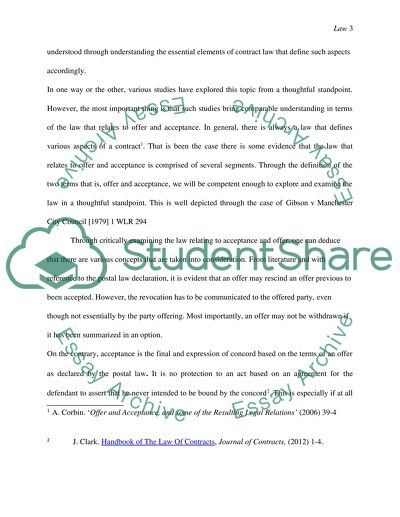 Download file to see previous pages On the other part of a contract is the acceptance of any given offer. In terms of definition, acceptance refers to the concluding unqualified term of acquiesce to all the conditions of an offer as declared by the postal law. With reference to offer, acceptance must be communicated to be valid as demonstrated through several different studies. Notably, the communication of acceptance is usually in writing, orally, and inferred from demeanor. Noteworthy, there can always be an acceptance simply when there is an offer. Nevertheless, in the absence of an offer, acceptance cannot take place at all and so there is no officially binding contract that can be produced. This paper critically examines the law that relates to acceptance and offer. Examining the law relating to Acceptance of an Offer The law relating to acceptance and offer can be examined through various ways. Such methods come in relation to the basics of contract law, which to some extent have some comparable aspects. Essentially, the law that relates to acceptance and offer can be clearly understood through understanding the essential elements of contract law that define such aspects accordingly. In one way or the other, various studies have explored this topic from a thoughtful standpoint. However, the most important thing is that such studies bring comparable understanding in terms of the law that relates to offer and acceptance. In general, there is always a law that defines various aspects of a contract1. That is been the case there is some evidence that the law that relates to offer and acceptance is comprised of several segments. Through the definition of the two terms that is, offer and acceptance, we will be competent enough to explore and examine the law in a thoughtful standpoint. This is well depicted through the case of Gibson v Manchester City Council [1979] 1 WLR 294 Through critically examining the law relating to acceptance and offer, one can deduce that there are various concepts that are taken into consideration. From literature and with reference to the postal law declaration, it is evident that an offer may rescind an offer previous to been accepted. However, the revocation has to be communicated to the offered party, even though not essentially by the party offering. Most importantly, an offer may not be withdrawn if it has been summarized in an option. On the contrary, acceptance is the final and expression of concord based on the terms of an offer as declared by the postal law. It is no protection to an act based on an agreement for the defendant to assert that he never intended to be bound by the concord2. This is especially if at all the circumstances is proved at examination that the conduct was such that it corresponded to the other party that the defendant had actually settled. Through the case study of Gibbons v Proctor (1891) 64 LT 594, this can be well understood. Through examining the law relating to acceptance and offer, it is worth to contemplate that a contract has to be created, in the assumption that the other requirements are met accordingly. This occurs especially during instances when the parties provide objective demonstration of the aim to form the contract3. For sure, the assent must be provided to terms of the accord. More often than not, this entails the generation, through making sure that one party involved in the offer has to bind in the lead of certain terms, and the involved parties' that is, ...Download file to see next pages Read More
Share:
Cite this document
(“Contract Law Essay Example | Topics and Well Written Essays - 2500 words”, n.d.)
Retrieved from https://studentshare.org/law/1398105-contract-law

CHECK THESE SAMPLES OF Contract Law

In th...
8 Pages (2000 words) Case Study
sponsored ads
Save Your Time for More Important Things
Let us write or edit the essay on your topic "Contract Law" with a personal 20% discount.
GRAB THE BEST PAPER

Let us find you another Essay on topic Contract Law for FREE!