Comments (0)
Add to wishlistDelete from wishlist
Cite this document
Summary
Part A The first assumption is that James and Cara were never married. According to the fact pattern, they were described as having set up a home together, and Cara decided that she no longer wanted to live with James. Therefore, these two phrases, coupled with the fact that there is no mention of a marriage between the two, would mean that the two parties were not married…
Download full paperFile format: .doc, available for editing
HIDE THIS PAPERGRAB THE BEST PAPER97% of users find it useful 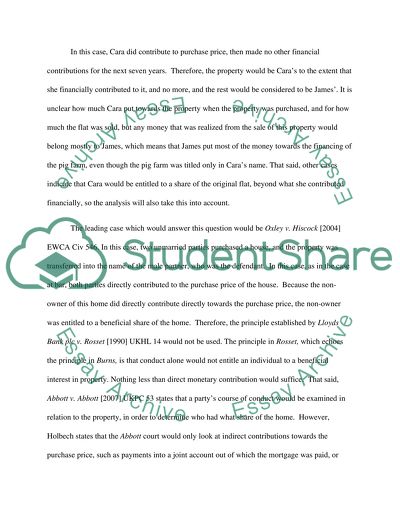 Download file to see previous pages This arrangement went on for seven years – James making the mortgage repayments, while Cara did domestic chores. Cara did not make any mortgage payments on this flat, nor did she have a child at home to care for. Because the proceeds from the flat were used to buy the pig farm, it is therefore pertinent to analyze whose property was the flat in the first instance. Therefore, the real question here is whether Cara’s domestic contribution towards the household factors into who would be entitled to lay claim to the original flat? This question can be answered by examining Burns v. Burns [1984] Ch 317. In Burns, the plaintiff, Valerie Burns, lived with the defendant for 19 years, without the benefit of marriage. Valerie did not contribute financially towards the purchase price of the home or the mortgage installments, and acted as a homemaker. She also paid some household bills and paid for expenses related to redecorating. However, the Burns court stated that, absence any proof that Valerie made financial contributions to the purchase price or the mortgage installments, she did not have the right to beneficial entitlement to the home. In this case, Cara did contribute to purchase price, then made no other financial contributions for the next seven years. Therefore, the property would be Cara’s to the extent that she financially contributed to it, and no more, and the rest would be considered to be James’. It is unclear how much Cara put towards the property when the property was purchased, and for how much the flat was sold, but any money that was realized from the sale of this property would belong mostly to James, which means that James put most of the money towards the financing of the pig farm, even though the pig farm was titled only in Cara’s name. That said, other cases indicate that Cara would be entitled to a share of the original flat, beyond what she contributed financially, so the analysis will also take this into account. The leading case which would answer this question would be Oxley v. Hiscock [2004] EWCA Civ 546. In this case, two unmarried parties purchased a house, and the property was transferred into the name of the male partner, who was the defendant. In this case, as in the case at bar, both parties directly contributed to the purchase price of the house. Because the non-owner of this home did directly contribute directly towards the purchase price, the non-owner was entitled to a beneficial share of the home. Therefore, the principle established by Lloyds Bank plc v. Rosset [1990] UKHL 14 would not be used. The principle in Rosset, which echoes the principle in Burns, is that conduct alone would not entitle an individual to a beneficial interest in property. Nothing less than direct monetary contribution would suffice. That said, Abbott v. Abbott [2007] UKPC 53 states that a party’s course of conduct would be examined in relation to the property, in order to determine who had what share of the home. However, Holbech states that the Abbott court would only look at indirect contributions towards the purchase price, such as payments into a joint account out of which the mortgage was paid, or works to improve the property. Drake v. Whipp [1986] Ch 638 is another case which addresses these concerns. ...Download file to see next pagesRead More
Share:
Tags
Cite this document
(“LAW2040 PROPERTY LAW 2B Essay Example | Topics and Well Written Essays - 3000 words”, n.d.)
Retrieved from https://studentshare.org/law/1398579-law2040-property-law-2b
(LAW2040 PROPERTY LAW 2B Essay Example | Topics and Well Written Essays - 3000 Words)
https://studentshare.org/law/1398579-law2040-property-law-2b.
“LAW2040 PROPERTY LAW 2B Essay Example | Topics and Well Written Essays - 3000 Words”, n.d. https://studentshare.org/law/1398579-law2040-property-law-2b.
Comments (0)
Click to create a comment or rate a document

CHECK THESE SAMPLES OF LAW2040 PROPERTY LAW 2B

In th...
8 Pages(2000 words)Case Study
sponsored ads
Save Your Time for More Important Things
Let us write or edit the essay on your topic "LAW2040 PROPERTY LAW 2B" with a personal 20% discount.
GRAB THE BEST PAPER

Let us find you another Essay on topic LAW2040 PROPERTY LAW 2B for FREE!