Comments (0)
Add to wishlist Delete from wishlist
Cite this document
Summary
Part A In battery what is required is intentional contact not an intention to do harm1 –is the main point of the paper authored by F. Trindade. This researcher will critically analyse and discuss this statement with reference to the battery aspect of trespass to the person through breaking down the elements of battery and what sets it apart from the other intentional tort–assault…
Download full paper File format: .doc, available for editing
HIDE THIS PAPERGRAB THE BEST PAPER97.2% of users find it useful 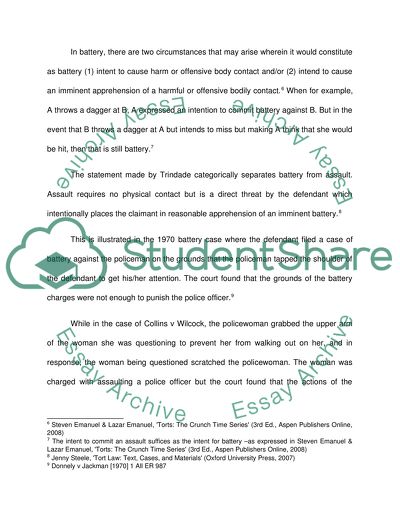 Download file to see previous pages However, unlike the other three, the commission of a battery may not have intent to do harm but what must be present is the intentional contact or physical contact between the doer of the crime and recipient4. This follows the principles surrounding mens rea and actus reus which in theory implies that there can be no criminal liability based on mens rea alone, but if the actus reus element of a crime is defined then it may potentially turn in to a guilt offence.5 In battery, there are two circumstances that may arise wherein it would constitute as battery (1) intent to cause harm or offensive body contact and/or (2) intend to cause an imminent apprehension of a harmful or offensive bodily contact.6 When for example, A throws a dagger at B, A expressed an intention to commit battery against B. But in the event that B throws a dagger at A but intends to miss but making A think that she would be hit, then that is still battery.7 The statement made by Trindade categorically separates battery from assault. Assault requires no physical contact but is a direct threat by the defendant which intentionally places the claimant in reasonable apprehension of an imminent battery.8 This is illustrated in the 1970 battery case where the defendant filed a case of battery against the policeman on the grounds that the policeman tapped the shoulder of the defendant to get his/her attention. The court found that the grounds of the battery charges were not enough to punish the police officer.9 While in the case of Collins v Wilcock, the policewoman grabbed the upper arm of the woman she was questioning to prevent her from walking out on her, and in response, the woman being questioned scratched the policewoman. The woman was charged with assaulting a police officer but the court found that the actions of the policewoman were enough to be convicted for a battery charge and the charges against the woman being questioned was lifted since her actions was to defend herself.10 In the case of R v Parmenter, the father of the baby was charged with four counts of causing GBH to his son. The baby sustained injuries to his bone structure of his legs and arms. The injuries were caused by the father’s mishandling of the baby. Although the father did not know that his actions would cause injuries to his son, the jury believed that the father should have prevented it by taking necessary measures to be more knowledgeable on how to handle a baby. The father was convicted with the four counts of GBH.11 It is the considered view of this writer that the overt act or mere physical contact should constitute as battery if taken against the will of the recipient. The intention to have contact even without the intent to do harm should be considered as a tortuous act. Emotional or psychological distress would accrue if the threat of harm is present. The elements and definition of the act should consider the psychological and emotional distress inflicted even if there was no intent to harm. The mere attempt should be considered tortuous since the possibility of physical harm will cause emotional and psychological distress therefore this should be given weight and credence when a person is charged with battery. Part B Question (a) The right of a person to enjoy a property12 is considered a basic human right and therefore, its peaceful ...Download file to see next pages Read More
Share:
Tags
Cite this document
(“LAW2044 LAW OF TORT II Essay Example | Topics and Well Written Essays - 3000 words”, n.d.)
Retrieved from https://studentshare.org/law/1398488-law2044-law-of-tort-ii

CHECK THESE SAMPLES OF LAW2044 LAW OF TORT II

In th...
8 Pages (2000 words) Case Study
sponsored ads
Save Your Time for More Important Things
Let us write or edit the essay on your topic "LAW2044 LAW OF TORT II" with a personal 20% discount.
GRAB THE BEST PAPER

Let us find you another Essay on topic LAW2044 LAW OF TORT II for FREE!