Comments (0)
Add to wishlist Delete from wishlist
Cite this document
Summary
This paper investigates the legal background of medical malpractice in relation to obtaining informed consent from patients for planned surgical procedures or medical treatment and the legal aspects of medical practice, particularly in relation to consent, battery and mistaken identity…
Download full paper File format: .doc, available for editing
HIDE THIS PAPERGRAB THE BEST PAPER91.5% of users find it useful 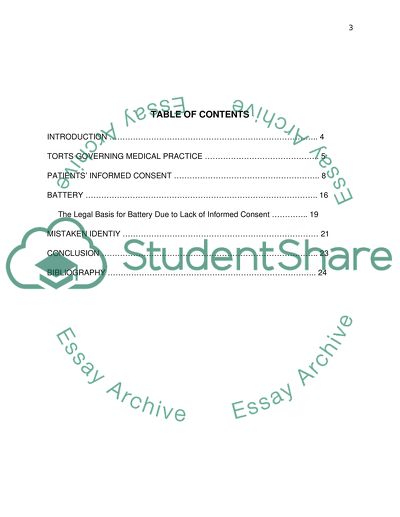 Download file to see previous pages The paper tells that over the last 2500 years, codes and statements of ethical principles have existed to guide medical practitioners. Their objective is “to ensure that the community receives the highest standards of care, and to prevent doctors from abusing the trust and power granted to them by the community”. The principles contained in the modern codes originated from Greece’s ancient Hippocratic Oath which delineated the moral and ethical requirements of an ideal physician. The principles are similar to those of the modern codes of medical ethics established by the World Medical Association. It is both remarkable as well as misleading; remarkable because of the great changes that have taken part in medical practice, and misleading because it may be wrongly understood that the principles of the Hippocratic Oath are indisputable. The principles were not developed in isolation by the medical profession. The codes of ethics are capable of change “and each ethical principle needs to be interpreted in the light of prevailing circumstances” including community values. The practice of medicine is governed by medical law, particularly civil and breach of contract laws which include Torts. These laws ensure that the ethical and moral aspects of medical practice are followed by doctors. The two main differences between the Hippocratic Oath and modern ethical concepts include the contemporary emphasis on patient autonomy, and the concept of distributive justice. “The principle of self-determination is frequently asserted in medical law and ethics” (Stauch, Wheat & Tingle 2002, p.16). There is an absolute right to self-determination as long as the person is capable of making decisions. Thesis Statement: The purpose of this paper is to investigate the legal aspects of medical practice, particularly in relation to consent, battery and mistaken identity. TORTS GOVERNING MEDICAL PRACTICE Tort is a branch of the civil law, as opposed to ...Download file to see next pages Read More
Share:
Tags
Cite this document
(“Law and medicine: Informed consent, battery and mistaken identity Essay”, n.d.)
Retrieved from https://studentshare.org/law/1395282-law-and-medicine-informed-consent-battery-and-mistaken-identity

CHECK THESE SAMPLES OF Law and medicine: Informed consent, battery and mistaken identity

verted to this religion believe that finally they have found their true identity by discovering that they are the descendants of the tribes of “white” Israel that were lost (Quarles 2004, p.7).
When any group of people say that they are superior to others on the basis of the race they belong to and also inculcate the belief that they are the only chosen people of God and not the people from other ethnic background, then one can very well say that that group or the organization is practicing racial beliefs. People who follow the Christian Identity believe that the people from Caucasian ethnic background are true Israelites and hence they are the only people from the God’s family (Quarles 2004, p.9). The teach...
6 Pages (1500 words) Coursework

In th...
8 Pages (2000 words) Case Study
sponsored ads
Save Your Time for More Important Things
Let us write or edit the essay on your topic "Law and medicine: Informed consent, battery and mistaken identity" with a personal 20% discount.
GRAB THE BEST PAPER

Let us find you another Essay on topic Law and medicine: Informed consent, battery and mistaken identity for FREE!