Comments (0)
Add to wishlist Delete from wishlist
Cite this document
Summary
COMPANY LAW (Author’s Name) (Institutional Affiliation) Research on 3 Cases CASE 1  John currently operates a shoemaking business as a sole trader. He runs the business from premises rented in Stratford. However, a recent boost in sales as a result of the Olympic Games has convinced John to expand the business…
Download full paper File format: .doc, available for editing
HIDE THIS PAPERGRAB THE BEST PAPER98.5% of users find it useful 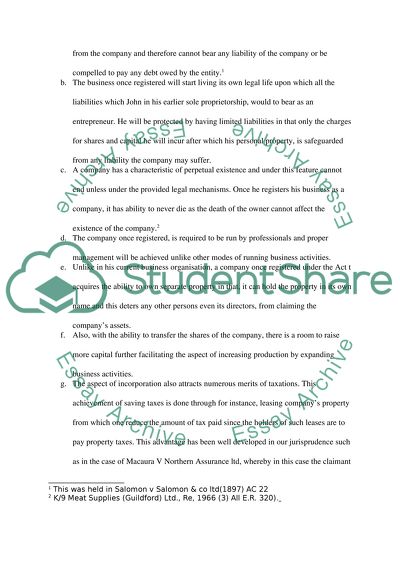 Download file to see previous pages  Explanations of the options available to John with reference to relevant statutory provisions and case law On the initiative undertaken by John with regards to changing the legal formality of the business, there are a number of options available; I would advise him to incorporate his business since it will offer him a number of advantages relating to returns and management of the business. Incorporation entails the aspect of registering a business entity under the companies’ Act where it runs its activities as a separate legal entity in which the owner is free from the liabilities of the business. The following are the benefits attached to incorporation of a business: a. The business once registered as a separate entity i.e. as a company, it acquires independent corporate existence features, upon these features, the owner is distinct from the company and therefore cannot bear any liability of the company or be compelled to pay any debt owed by the entity.1 b. The business once registered will start living its own legal life upon which all the liabilities which John in his earlier sole proprietorship, would to bear as an entrepreneur. He will be protected by having limited liabilities in that only the charges for shares and capital he will incur after which his personal property, is safeguarded from any liability the company may suffer. c. A company has a characteristic of perpetual existence and under this feature cannot end unless under the provided legal mechanisms. Once he registers his business as a company, it has ability to never die as the death of the owner cannot affect the existence of the company.2 d. The company once registered, is required to be run by professionals and proper management will be achieved unlike other modes of running business activities. e. Unlike in his current business organisation, a company once registered under the Act t acquires the ability to own separate property in that, it can hold the property in its own name and this deters any other persons even its directors, from claiming the company’s assets. f. Also, with the ability to transfer the shares of the company, there is a room to raise more capital further facilitating the aspect of increasing production by expanding business activities. g. The aspect of incorporation also attracts numerous merits of taxations. This achievement of saving taxes is done through for instance, leasing company’s property from which one reduce the amount of tax paid since the holders of such leases are to pay property taxes. This advantage has been well developed in our jurisprudence such as in the case of Macaura V Northern Assurance ltd, whereby in this case the claimant who had the majority shareholding of the company had gone to court to claim for compensation from an insurance company upon the fire tragedy which burnt all the company properties, their honourable justices were of the opinion that the companies properties belong to the company and not the holder of the large number shares and only the company through its agents can claim this compensation. This position clearly outlines the fact that the properties of the company are safeguarded as those of the company and in case of any damage on them still the members of the company cannot be held liable of the same. h. By creation of an independent corporate existence, the owner will be able to keep a private and confidential identity away from that of business.3 i. Also when he ...Download file to see next pages Read More
Share:
Tags
Cite this document
(“Company Law Essay Example | Topics and Well Written Essays - 3000 words”, n.d.)
Retrieved from https://studentshare.org/law/1398443-company-law