Comments (0)
Add to wishlist Delete from wishlist
Cite this document
Summary
Planning processes in many countries including the UK operate as administrative systems. The planning organizations and agencies responsible for management of natural and built environment agree on programmes and policies that instigate change, prepare for development and promote sites. …
Download full paper File format: .doc, available for editing
HIDE THIS PAPERGRAB THE BEST PAPER97.2% of users find it useful 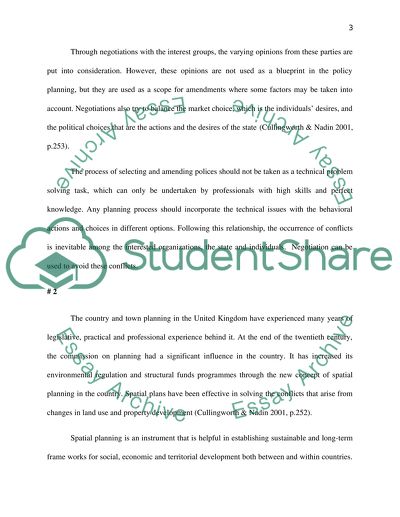 Download file to see previous pages Some of the key administrative roles of the planning agencies include preparing and implementing policies, organising and allocation of goals and solving the conflicts that may arise from interest groups (Cullingworth & Nadin 2001, p.252). Since a planning policy can affect the future economic prosperity of a given area, it cannot be taken as an independent statutory activity of the state. Negotiations play a key role in implementing a planning policy. There is always a need to encompass the views of all interest groups in a given planning policy.
Negotiations help to encompass all the activities and views of organizations involved in the planning process such as the central government, statutory bodies, local planning authorities, the market, and the public in the planning process. It is crucial to consider these interests to avoid conflicts after the full implementation of a policy. Each of these agencies mentioned above has a certain degree of influence in the planning process (Cullingworth & Nadin 2001, p.252). Their influence may be experienced at various stages of policy formulation as well as implementation. The degree of influence of these interest groups varies in different situations and different groups. The policy planners must make sure that they draft and implement policies that are most appropriate in a given administrative area.
Through negotiations with the interest groups, the varying opinions from these parties are put into consideration. However, these opinions are not used as a blueprint in the policy planning, but they are used as a scope for amendments where some factors may be taken into account. Negotiations also try to balance the market choice, which is the individuals’ desires, and the political choices that are the actions and the desires of the state (Cullingworth & Nadin 2001, p.253). The process of selecting and amending polices should not be taken as a technical problem solving task, which can only be undertaken by professionals with high skills and perfect knowledge. Any planning process should incorporate the technical issues with the behavioral actions and choices in different options. Following this relationship, the occurrence of conflicts is inevitable among the interested organizations, the state and individuals. Negotiation can be used to avoid these conflicts. # 2 The country and town planning in the United Kingdom have experienced many years of legislative, practical and professional experience behind it. At the end of the twentieth century, the commission on planning had a significant influence in the country. It has increased its environmental regulation and structural funds programmes through the new concept of spatial planning in the country. Spatial plans have been effective in solving the conflicts that arise from changes in land use and property development (Cullingworth & Nadin 2001, p.252). Spatial planning is an instrument that is helpful in establishing sustainable and long-term frame works for social, economic and territorial development both between and within countries. The main role played by partial planning is enhancing the integration among sectors like transport, housing, industry and energy. It is also an essential tool for improving the local and national systems of rural and urban development; this takes into account the environmental issues. Spatial planning plays both developmental and regulatory functions (Cullingworth & Nadin 2001, p.253). As a regulatory mechanism, spatial planning assists the government at local and national levels to give approval for a certain activity. As a development mechanism, the government uses it to elaborate on developmental tools necessary for ...Download file to see next pages Read More
Share:
Tags
Cite this document
(“Planning Law And Implementation Essay Example | Topics and Well Written Essays - 3500 words”, n.d.)
Retrieved from https://studentshare.org/law/1397321-planning-law-and-implementation

CHECK THESE SAMPLES OF Planning Law And Implementation

In th...
8 Pages (2000 words) Case Study
sponsored ads
Save Your Time for More Important Things
Let us write or edit the essay on your topic "Planning Law And Implementation" with a personal 20% discount.
GRAB THE BEST PAPER

Let us find you another Essay on topic Planning Law And Implementation for FREE!