Comments (0)
Add to wishlistDelete from wishlist
Cite this document
Summary
Weddings, rallies, meetings and sports are some of the numerous events that the current society organizes.Thus event management is an emergent sphere of specification that a significant percentage of the population has explored. …
Download full paperFile format: .doc, available for editing
HIDE THIS PAPERGRAB THE BEST PAPER91.5% of users find it useful 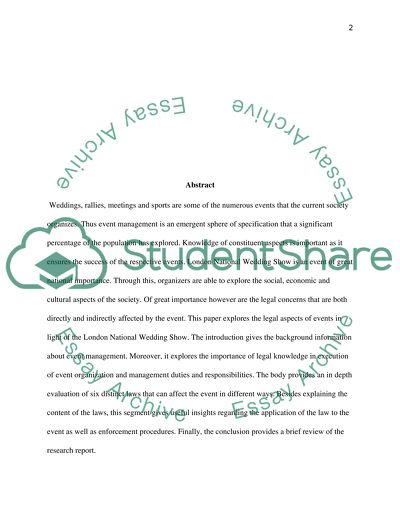 Download file to see previous pages Weddings, rallies, meetings and sports are some of the numerous events that the current society organizes.Thus event management is an emergent sphere of specification that a significant percentage of the population has explored. Knowledge of constituent aspects is important as it ensures the success of the respective events. London National Wedding Show is an event of great national importance Through this, organizers are able to explore the social, economic and cultural aspects of the society. Of great importance however are the legal concerns that are both directly and indirectly affected by the event. This paper explores the legal aspects of events in light of the London National Wedding Show. The introduction gives the background information about event management. Moreover, it explores the importance of legal knowledge in execution of event organization and management duties and responsibilities. The body provides an in depth evaluation of six distinct laws that can affect the event in different ways. Besides explaining the content of the laws, this segment gives useful insights regarding the application of the law to the event as well as enforcement procedures. Finally, the conclusion provides a brief review of the research report. Introduction Events such as weddings, rallies and meetings need effective prior planning for them to be successful. This is particularly important if such events are big and are likely to have lasting implications on both the shareholders and stakeholders. The success of an event is depended on a host of factors that are social, economic, environmental, cultural and legal in nature. All these facets need to be mirrored in the planning process and addressed accordingly to attain desirable outcomes. Notably, they share intricate relationships and therefore failure to effectively address a single aspect can have lasting negative implications on the holistic wellbeing of the event. Just like professionals in other fields of specification, event organizers need to be conversant with the expectations of all spheres of the environment within which they organize the events. Since they are equipped with the relevant skills, knowledge and expertise, it is certain that they are able to address the foregoing concerns with ease. The London national wedding show is actually the biggest in the United Kingdom. It is considered the best consumer show that is attended by wedding experts from various backgrounds. It has various inspirational features that allow consumers from across the world to choose products that would make their wedding experiences exemplary. Undoubtedly, the ideas that this event present can truly make one to plan a perfect wedding. Most importantly, the shopping experience gives one a chance to have access to wide ranging products at a reasonable price. Statistical evidence indicates that the numbers of experts who attend the event are close to five hundred. Seemingly, organizers of this event are likely to put in great effort in a bid to ensure that everything runs smoothly. Besides time, financial resources that are likely to be invested in such an event are immense. Further, organizers can opt to employ various incentives to make the event livelier. Generally, the event is likely to be characterized by a host of activities whose implications are diverse. Apart from the managerial aspect, it is vitally important for event managers to be well versed with the legal aspects of such an event. In this respect, is worth noting that respective activities of the event have different legal implications. Unlike the managerial and organizational concerns that can be fixed accordingly, legal issues are relatively sensitive and can undermine the success of ...Download file to see next pagesRead More
Share:
Tags
Cite this document
(“Entertainment law:London national wedding show Essay”, n.d.)
Retrieved from https://studentshare.org/law/1397259-entertainment-lawlondon-national-wedding-show
(Entertainment law:London National Wedding Show Essay)
https://studentshare.org/law/1397259-entertainment-lawlondon-national-wedding-show.
“Entertainment law:London National Wedding Show Essay”, n.d. https://studentshare.org/law/1397259-entertainment-lawlondon-national-wedding-show.
Comments (0)
Click to create a comment or rate a document

In th...
8 Pages(2000 words)Case Study
sponsored ads
Save Your Time for More Important Things
Let us write or edit the essay on your topic "Entertainment law:London national wedding show" with a personal 20% discount.
GRAB THE BEST PAPER

Let us find you another Essay on topic Entertainment law:London national wedding show for FREE!