Comments (0)
Add to wishlist Delete from wishlist
Cite this document
Summary
The company directors are collectively referred to us the board of directors who usually perform their duties together. However, the articles of association confer power on one or more directors to perform executive powers, i.e. there is usually one managing director who has a considerable executive power. …
Download full paper File format: .doc, available for editing
HIDE THIS PAPERGRAB THE BEST PAPER91.3% of users find it useful 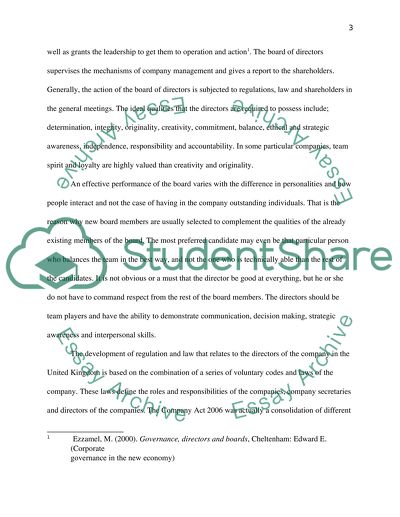 Download file to see previous pages A director or any equivalent title is responsible for overseeing company’s affairs management. The statute does not have any comprehensive definition of a director except that the term ‘director’ entails any person in the position of the director (IAS Regulation 2006). This paper seeks to critically examine the seven General Duties of Directors as set out in Part 10 Chapter 2 of the Companies Act 2006. To begin with, the elements of company governance are discussed in the following paragraph to help us understand the scope of directorship in the companies after which the general duties of the directors will follow.
Some companies also have the position of non executive director. These are directors who are not concerned with the day to day management of company operation and is expected to give own independent view and opinion on the issues of the board. Companies are controlled and directed by a corporate governance system. It is the role of the board of directors to oversee the governance of the company. It is the board that sets the strategies and aims of the company as well as grants the leadership to get them to operation and action . The board of directors supervises the mechanisms of company management and gives a report to the shareholders. Generally, the action of the board of directors is subjected to regulations, law and shareholders in the general meetings. The ideal qualities that the directors are required to possess include; determination, integrity, originality, creativity, commitment, balance, ethical and strategic awareness, independence, responsibility and accountability. In some particular companies, team spirit and loyalty are highly valued than creativity and originality. An effective performance of the board varies with the difference in personalities and how people interact and not the case of having in the company outstanding individuals. That is the reason why new board members are usually selected to complement the qualities of the already existing members of the board. The most preferred candidate may even be that particular person who balances the team in the best way, and not the one who is technically able than the rest of the candidates. It is not obvious or a must that the director be good at everything, but he or she do not have to command respect from the rest of the board members. The directors should be team players and have the ability to demonstrate communication, decision making, strategic awareness and interpersonal skills. The development of regulation and law that relates to the directors of the company in the United Kingdom is based on the combination of a series of voluntary codes and laws of the company. These laws define the roles and responsibilities of the companies, company secretaries and directors of the companies. The Company Act 2006 was actually a consolidation of different pieces of other legislation of the company, which in that particular applied to the companies that were incorporated under that Act. It is vial to note that partnerships, sole traders and limited partnerships were not initially covered in the Companies Act 2005. The Companies Act 2006 however revised this and replaced the company legislations that were existing and the exceptions of the provisions that were related to the interest of communities over companies and the company ...Download file to see next pages Read More
Share:
Tags
Cite this document
(“The Seven General Duties of Directors as set out in Part 10 Chapter 2 Essay”, n.d.)
Retrieved from https://studentshare.org/law/1397229-the-seven-general-duties-of-directors-as-set-out-in-part-10-chapter-2-of-the-companies-act-2006

(The Seven General Duties of Directors As Set Out in Part 10 Chapter 2 Essay)
https://studentshare.org/law/1397229-the-seven-general-duties-of-directors-as-set-out-in-part-10-chapter-2-of-the-companies-act-2006.

“The Seven General Duties of Directors As Set Out in Part 10 Chapter 2 Essay”, n.d. https://studentshare.org/law/1397229-the-seven-general-duties-of-directors-as-set-out-in-part-10-chapter-2-of-the-companies-act-2006.
Comments (0)
Click to create a comment or rate a document

According to Millet “A fiduciary is someone who has undertaken to act for or on behalf of another in a particular matter in circumstances which gives rise to a relationship of trust and confidence.” Along this line of definition, Millet stated that the distinguishing mark of fiduciary duty is that “single-minded loyalty” owed by the fiduciary to the principal.
When does one become a fiduciary? In the case of DHL International (NZ) Ltd. v. Richmond Ltd (1993), 3 NZLR 10 at 22 CA, the power and discretion test was employed to determine the existence of a fiduciary relationship. There are three elements involved in this test: 1) the fiduciary exercises discretion or powers to decide in behalf of the benef...
15 Pages (3750 words) Case Study

As a major consumer product, this study will discuss the importance of having a price regulation within the pharmaceutical industry. Several factors that could affect the competition in the branded pharmaceutical market will be elaborate to give us a good insight with regards to the pricing of medicines. In line with the importance of having imposed a price regulated on medicines, the author will discuss the negative effects of not regulating the generic medicines as well as...
11 Pages (2750 words) Case Study

The goods purchased in contracts should be of satisfactory quality as established by Section 14(2) of the Sale of Goods Act. However, this statutory requirement is applied to goods sold in the normal course of the business. In addition, goods supplied in contracts should have satisfactory quality and should be reasonably fit for the purpose for which the buyer had bought them.
Goods supplied must conform to their original description made at the time of entering into the contract. These requirements benefit the buyer and the supplier will be held liable if these requirements are breached. Essentially, the Sale of Goods Act ensures that the goods supplied must be of satisfactory quality and this requirement applies to the sale...
11 Pages (2750 words) Case Study

Critics of the excessive packages are of the opinion that such high packages reflect ‘pay for failure’ and do not take in to account the financial performance of the company (Solomon, 2007 p. 40). Additionally, most of the directors are geared at self-interests, thus undermining the ability of the shareholders to receive a fair return for their investments (Barty and Jones, 2012 p.14).
According to a recent report by the High Pay Commission, there has been a drastic growth in directors’ packages over the last thirty years. According to the report, directors’ packages have risen by about 5,000 percent in the last thirty years while the average income worker has increased by only 300 percent. The report...
6 Pages (1500 words) Coursework
sponsored ads
Save Your Time for More Important Things
Let us write or edit the essay on your topic "The Seven General Duties of Directors as set out in Part 10 Chapter 2 of the Companies Act 2006" with a personal 20% discount.
GRAB THE BEST PAPER

Let us find you another Essay on topic The Seven General Duties of Directors as set out in Part 10 Chapter 2 of the Companies Act 2006 for FREE!