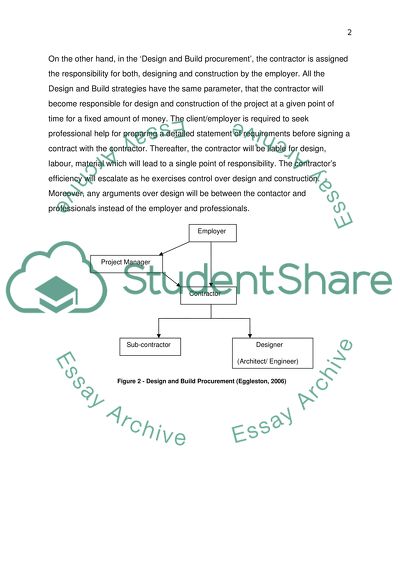 Download file to see previous pages As the contractor was excluded from the design stage so the employer retains the risk for any mistakes or errors in the design (Gerrard, 2012). On the other hand, in the ‘Design and Build procurement’, the contractor is assigned the responsibility for both, designing and construction by the employer. All the Design and Build strategies have the same parameter, that the contractor will become responsible for design and construction of the project at a given point of time for a fixed amount of money. The client/employer is required to seek professional help for preparing a detailed statement of requirements before signing a contract with the contractor. Thereafter, the contractor will be liable for design, labour, material which will lead to a single point of responsibility. The contractor’s efficiency will escalate as he exercises control over design and construction. Moreover, any arguments over design will be between the contactor and professionals instead of the employer and professionals. 1.(b). Engineers are going to be appointed by the employer or contractor depending on the procurement model. A chief engineer should be nominated if several engineers from various fields are to be appointed. Engineers should be given authority and access if the design is based on a process of technology, to which the employer holds licence. Under the standard build procurement, an engineer is required to meet the employer’s needs for inviting tenders. On the other hand, in a design and build procurement, the role of an engineer is based on providing a performance specification, standards for material input and design which will be included in the Works Specification (NEC Contract, 2012). To be more precise, a structural engineer is responsible for designing the structure of a building together with drainage and installation. He will also provide professional and expert opinion to the client about the structure and cost of every part of the building. His work must co-ordinate with the architect and services engineer. A services engineer’s role is to design and identify mechanical and electrical services keeping in view the employers specifications. They are to provide advice on matters like environmental issues, sustainability and cost. Following novation, engineers will be responsible to the contractor instead of the employer (APUC, 2012). 1.(c). Compensation events are those which do not arise because of a default on the contractor’s part and therefore entitle him to compensation in price and time. A resource forecast is used to assess the impact of any compensating event on cost and time. Compensation event pass through notification, quotation, revision and implementation stages. An event should meet the criteria mentioned in Clause 60 of NEC3 to be treated as a compensation event (Eggleston, 2006). Clause 60(1) states that: “A Project Manager gives an instruction changing the works information except: a. A change made in order to accept a defect or b. A change to Works Information provided by the Contractor for his design which is made either at his request or to comply with other Works Information provided by the Employer.” In this scenario, the Employer has instructed the Contractor to provide a design on an arch detail which was not included in the original ...Download file to see next pages Read More
Share:
Tags
Cite this document
(“Construction Law Essay Example | Topics and Well Written Essays - 1250 words”, n.d.)
Retrieved from https://studentshare.org/law/1396792-construction-law

CHECK THESE SAMPLES OF Construction Law

In th...
8 Pages (2000 words) Case Study
sponsored ads
Save Your Time for More Important Things
Let us write or edit the essay on your topic "Construction Law" with a personal 20% discount.
GRAB THE BEST PAPER

Let us find you another Essay on topic Construction Law for FREE!