Comments (0)
Add to wishlistDelete from wishlist
Cite this document
Summary
The law of tort is a common law that deals with situations where such acts are committed that are not illegal but cause harm to somebody else. Tort is a civil wrong. Anybody who has suffered a loss from a tortious act is entitled to recover the loss from the tortfeasor, the person who has committed a tortious act…
Download full paperFile format: .doc, available for editing
HIDE THIS PAPERGRAB THE BEST PAPER98.2% of users find it useful 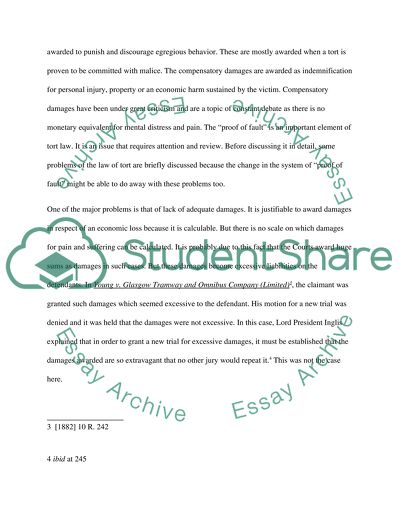 Download file to see previous pages There are three types of damages available under the tort law i.e. nominal, compensatory and punitive damages. Nominal damages are a symbolic reward and are awarded to the plaintiff where no actual harm is proven but liability for a tort is established. Punitive damages are awarded to punish and discourage egregious behavior. These are mostly awarded when a tort is proven to be committed with malice. The compensatory damages are awarded as indemnification for personal injury, property or an economic harm sustained by the victim. Compensatory damages have been under great criticism and are a topic of constant debate as there is no monetary equivalent for mental distress and pain. The “proof of fault” is an important element of tort law. It is an issue that requires attention and review. Before discussing it in detail, some problems of the law of tort are briefly discussed because the change in the system of “proof of fault” might be able to do away with these problems too. One of the major problems is that of lack of adequate damages. It is justifiable to award damages in respect of an economic loss because it is calculable. But there is no scale on which damages for pain and suffering can be calculated. It is probably due to this fact that the Courts award huge sums as damages in such cases. But these damages become excessive liabilities on the defendants. In Young v. Glasgow Tramway and Omnibus Company (Limited)3, the claimant was granted such damages which seemed excessive to the defendant. His motion for a new trial was denied and it was held that the damages were not excessive. In this case, Lord President Inglis explained that in order to grant a new trial for excessive damages, it must be established that the damages awarded are so extravagant that no other jury would repeat it.4 This was not the case here. In this case, it is very difficult for a third party to determine whether justice is served or not because there is no scale which can make a pecuniary measurement of the pain and suffering of a person. Cooter and Porat discussed the issue as to what should be the procedure of measuring the compensation for negligence by doctors and drivers.5 According to them, the Courts often follow a system of probability and percentage. The probability pertains to the probability that harm might be caused. The types of potential harms caused by the two parties are very different from each other as there is a contractual relationship between the doctors and patients and there is no such relation between the drivers and the victims. According to Cooter and Porat, there is a need to bring externalities into consideration while determining the amount of compensation. There is a possibility that there may be some externalities that prevent the defendants from the performance of their duty to care. The ...Download file to see next pagesRead More
Share:
Tags
Cite this document
(“The law should be changed in order that compensation for personal Essay”, n.d.)
Retrieved from https://studentshare.org/law/1396011-the-law-should-be-changed-in-order-that-compensation-for-personal-injury-accidents-is-not-based-on-the-proof-of-fault
(The Law Should Be Changed in Order That Compensation for Personal Essay)
https://studentshare.org/law/1396011-the-law-should-be-changed-in-order-that-compensation-for-personal-injury-accidents-is-not-based-on-the-proof-of-fault.
“The Law Should Be Changed in Order That Compensation for Personal Essay”, n.d. https://studentshare.org/law/1396011-the-law-should-be-changed-in-order-that-compensation-for-personal-injury-accidents-is-not-based-on-the-proof-of-fault.
Comments (0)
Click to create a comment or rate a document

In th...
8 Pages(2000 words)Case Study
sponsored ads
Save Your Time for More Important Things
Let us write or edit the essay on your topic "The law should be changed in order that compensation for personal injury accidents is not based on the proof of fault" with a personal 20% discount.
GRAB THE BEST PAPER

Let us find you another Essay on topic The law should be changed in order that compensation for personal injury accidents is not based on the proof of fault for FREE!