Comments (1)
Add to wishlistDelete from wishlist
Cite this document
Summary
In July 2010, Gail had inherited a sum of £150,000 from her father. In other words, the value of Gail’s estate, i.e. the inherited assets, can be estimated to £375,000. In terms of the will’s validity, the following issues should be mentioned: in accordance with the UK law, a will is automatically revoked if a marriage takes place (s 18(1) of Wills Act 1837)…
Download full paperFile format: .doc, available for editing
HIDE THIS PAPERGRAB THE BEST PAPER97.5% of users find it useful 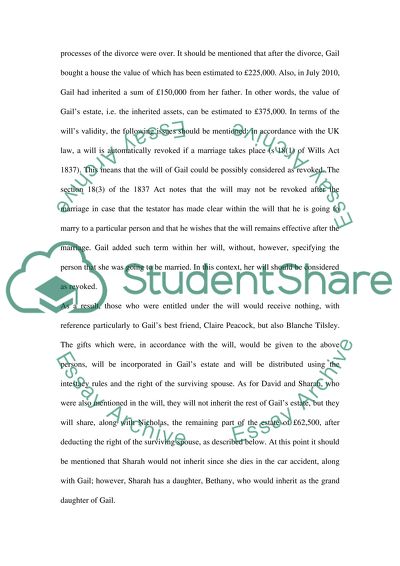 Task 1
In order to check the legal validity of any claim against the estate of Gail, it would be necessary to refer primarily to the will that Gail prepared.
In terms of the will’s validity, no doubts can exist. In accordance with the s9 of the Wills Act 1837 ‘no will shall be valid unless it is in writing and signed by the testator or by some other person in his presence and by his direction’. The will of Gail is signed by her; the text of the will contains the phrase ‘Signed by the said Testator,…, in the presence of us’, a phrase that verifies the fact that the will was signed before the witnesses, so no doubt in regard to the will’s validity exists. In other words, the will of Gail is valid being aligned with the relevant provisions of the law, as described above.
At the next level, the text of the will should be reviewed for judging whether Gail assets would be distributed in accordance with the will, or whether her estate will fall under intestacy. In other words, it should be made clear whether the will has been revoked or not. Gail prepared the will in December 2010. At that time, Gail had already taken a divorce from Brian, as assumed by the fact that when Martin proposed to her, the processes of the divorce were over. It should be mentioned that after the divorce, Gail bought a house the value of which has been estimated to ?225,000. Also, in July 2010, Gail had inherited a sum of ?150,000 from her father. In other words, the value of Gail’s estate, i.e. the inherited assets, can be estimated to ?375,000. In terms of the will’s validity, the following issues should be mentioned: in accordance with the UK law, a will is automatically revoked if a marriage takes place (s 18(1) of Wills Act 1837). This means that the will of Gail could be possibly considered as revoked. The section 18(3) of the 1837 Act notes that the will may not be revoked after the marriage in case that the testator has made clear within the will that he is going to marry to a particular person and that he wishes that the will remains effective after the marriage. Gail added such term within her will, without, however, specifying the person that she was going to be married. In this context, her will should be considered as revoked. As a result, those who were entitled under the will would receive nothing, with reference particularly to Gail’s best friend, Claire Peacock, but also Blanche Tilsley. The gifts which were, in accordance with the will, would be given to the above persons, will be incorporated in Gail’s estate and will be distributed using the intestacy rules and the right of the surviving spouse. As for David and Sharah, who were also mentioned in the will, they will not inherit the rest of Gail’s estate, but they will share, along with Nicholas, the remaining part of the estate of ?62,500, after deducting the right of the surviving spouse, as described below. At this point it should be mentioned that Sharah would not inherit since she dies in the car accident, along with Gail; however, Sharah has a daughter, Bethany, who would inherit as the grand daughter of Gail. Under these terms, the estate of Gail would be distributed among the beneficiaries, using the Administration of Estates Act 1925, as containing the rules related to the surviving spouse rights, and the Law Reform (Succession Act) 1995, which includes the ...Download file to see next pagesRead More
Share:
Tags
Cite this document
(“Family law Scenario analysis Essay Example | Topics and Well Written Essays - 2500 words”, n.d.)
Retrieved from https://studentshare.org/law/1395078-family-law-scenario-analysis

au
audrey88 added comment 2 years ago
Student rated this paper as
This document saved me today. I liked the style. It was very useful for my law course.

In th...
8 Pages(2000 words)Case Study
sponsored ads
Save Your Time for More Important Things
Let us write or edit the essay on your topic "Family law Scenario analysis" with a personal 20% discount.
GRAB THE BEST PAPER

Let us find you another Essay on topic Family law Scenario analysis for FREE!