Comments (0)
Add to wishlistDelete from wishlist
Cite this document
Summary
This paper considers the case involved an appeal by the plaintiff (Mrs. Janet Dawkins) against the judgment of a lower court (Southampton County Court) regarding the personal damages claims by the appellant. …
Download full paperFile format: .doc, available for editing
HIDE THIS PAPERGRAB THE BEST PAPER95.3% of users find it useful 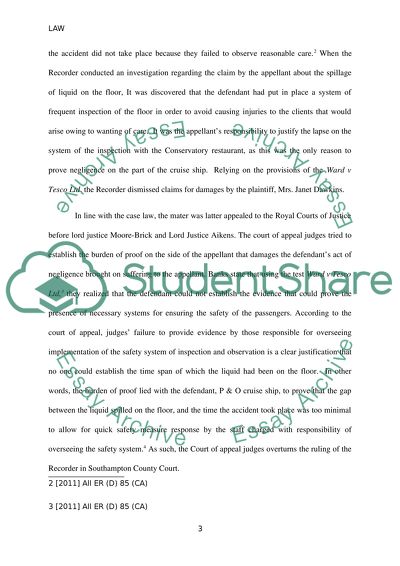 Download file to see previous pages The appellant slipped and fell on the cruise ship while walking through the Conservatory restaurant located in the ship. On falling on the restaurant’s floor, the appellant, Dawkins, sustained soft tissue injuries in her knee and wrist. She claimed that there was a small pool of fluid, which made the floor slippery making her slip. The appellant later took the matter to Southampton County Court claiming damages under Occupiers’ Liability Act 1957. Considering the ship’s location during the accident, the claim would be heard only under the Athens Convention on Carriage of Passengers and their Luggage by Sea 1974, which was part of Wales and England’s law already owing to the provisions of section 183 of the Merchant Shipping Act 1995.
The lower court (which is the county court) handled the case as stipulated by the general legal process. The case followed the general legal process as the accident had happened within the county and the case therefore heard in a county court. Failure to make judgement led to a higher court (Royal Court) to resolve it as required by the legal process. The defendant on his part claimed that he had put in place reasonable measures to ensure that the accident did not take place because they failed to observe reasonable care. When the Recorder conducted an investigation regarding the claim by the appellant about the spillage of liquid on the floor, It was discovered that the defendant had put in place a system of frequent inspection of the floor in order to avoid causing injuries to the clients that would arise owing to wanting of care. It was the appellant’s responsibility to justify the lapse on the system of the inspection with the Conservatory restaurant, as this was the only reason to prove negligence on the part of the cruise ship. Relying on the provisions of the Ward v Tesco Ltd, the Recorder dismissed claims for damages by the plaintiff, Mrs. Janet Dawkins. In line with the case law, the mater was latter appealed to the Royal Courts of Justice before lord justice Moore-Brick and Lord Justice Aikens. The court of appeal judges tried to establish the burden of proof on the side of the appellant that damages the defendant’s act of negligence brought on suffering to the appellant. Banks state that using the test Ward v Tesco Ltd,3 they realized that the defendant could not establish the evidence that could prove the presence of necessary systems for ensuring the safety of the passengers. According to the court of appeal, judges’ failure to provide evidence by those responsible for overseeing implementation of the safety system of inspection and observation is a clear justification that no one could establish the time span of which the liquid had been on the floor. In other words, the burden of proof lied with the defendant, P & O cruise ship, to prove that the gap between the liquid spilled on the floor, and the time the accident took place was too minimal to allow for quick safety measure response by the staff charged with responsibility of overseeing the safety system.4 As such, the Court of appeal judges overturns the ruling of the Recorder in Southampton County Court. Liability of Bresco The liability of Bresco, a local supermarket, arises under the Company’s Act 2006. 5 Bresco, being the occupier of the supermarket store, owes all the visitors entering the building a duty of care. This means that Bresco should eliminate any hazard or acts that may cause injury to any party entering the premises, within the premises or leaving the premises. Negligence on the part arises if it fails to do that. Breach to observe reasonable care can lead to ...Download file to see next pagesRead More
Share:
Tags
Cite this document
(“Law Essay Example | Topics and Well Written Essays - 1000 words”, n.d.)
Retrieved from https://studentshare.org/law/1394493-case-study

CHECK THESE SAMPLES OF Law

In th...
8 Pages(2000 words)Case Study
sponsored ads
Save Your Time for More Important Things
Let us write or edit the essay on your topic "Law" with a personal 20% discount.
GRAB THE BEST PAPER

Let us find you another Essay on topic Law for FREE!