Comments (0)
Add to wishlistDelete from wishlist
Cite this document
Summary
Negligence entails the omission of an act resulting in an injury. The Oxford law dictionary defines negligence as carelessness amounting to the culpable breach of duty. Failure to do something that a reasonable man would do amounts to negligence. …
Download full paperFile format: .doc, available for editing
HIDE THIS PAPERGRAB THE BEST PAPER94.2% of users find it useful 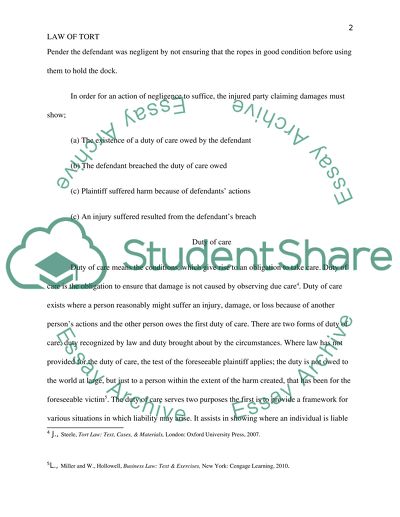 Extract of sample "Law of Tort"

Download file to see previous pages Carroll, v Fearon D , negligently manufactured a tire that led to a fatal accident on a motorway owing to its disintegration. This case did not attribute any specific negligent act to the manufacturer. Therefore, the judge held that either there was no requirement to specify the particular persons responsible for the defects, or the particular negligent act or omission. The disintegration of the tire accrued owing to the fault committed during the manufacturing process. In this case, the manufacturer was in confusion to explain how the fault connected to negligence. The duty of the judge is to identify negligent act . Negligence is the act of an individual to exercise due care. An act is negligent if the wrongdoer knew foresaw the outcome of the act one is negligent if the action done ought to take all reasonable foreseeable measures to ensure that the other party by his omissions or deeds is not injured by his omissions or deeds. In Heaven v Pender the defendant was negligent by not ensuring that the ropes in good condition before using them to hold the dock. Duty of care means the conditions, which give rise to an obligation to take care. Duty of care is the obligation to ensure that damage is not caused by observing due care . Duty of care exists where a person reasonably might suffer an injury, damage, or loss because of another person’s actions and the other person owes the first duty of care. There are two forms of duty of care, duty recognized by law and duty brought about by the circumstances. Where law has not provided for the duty of care, the test of the foreseeable plaintiff applies; the duty is not owed to the world at large, but just to a person within the extent of the harm created, that has been for the foreseeable victim5. The duty of care serves two purposes the first is to provide a framework for various situations in which liability may arise. It assists in showing where an individual is liable to another or owes the other a duty. The other purpose is to limit claims related to the negligence of a party; it sets the boundaries from which a party could claim due to negligence. One is supposed to observe standard care in order to ensure that they do not breach the duty of care. The only way a plaintiff can succeed in any action is by establishing a duty of care. Actions cannot withhold where no duty is established. In Gates v Mckema D6, a stage hypnotist caused psychiatric damage to a volunteer from the audience. Held the level of precaution expected should be that of a reasonably careful exponent of stage hypnotism-factor to consider-standard of care skill required. Standard care in this case is the care an individual is supposed to observe in order to ensure others are not injured or suffers losses. In Marshall v Osmond7, D while in pursuit of an escaping criminal, slammed on to the car crashing it. The presiding judge interpreted that the duty of care by the police officer was the same as that owed by any other. The duty to exhibit such care and skill was reasonable since the accident was unavoidable. He also ruled that, driving alongside another car in the police attempt to make an arrest was erroneous. This is because his judgment in the case did not amount to negligence. The factors that affect the duty of care are the balance of the involved dangers and the ...Download file to see next pagesRead More
Share:
Tags
Cite this document
(“Law of Tort Essay Example | Topics and Well Written Essays - 2750 words”, n.d.)
Retrieved from https://studentshare.org/law/1395759-law-of-tort
(Law of Tort Essay Example | Topics and Well Written Essays - 2750 Words)
https://studentshare.org/law/1395759-law-of-tort.
“Law of Tort Essay Example | Topics and Well Written Essays - 2750 Words”, n.d. https://studentshare.org/law/1395759-law-of-tort.
Comments (0)
Click to create a comment or rate a document

CHECK THESE SAMPLES OF Law of Tort

In th...
8 Pages(2000 words)Case Study
sponsored ads
Save Your Time for More Important Things
Let us write or edit the essay on your topic "Law of Tort" with a personal 20% discount.
GRAB THE BEST PAPER

Let us find you another Essay on topic Law of Tort for FREE!