Comments (0)
Add to wishlist Delete from wishlist
Cite this document
Summary
This paper will shed more light upon the ability of private individuals to seek damages for breaches in the EU competition law. A plethora of changes have taken place in the last decade, several changes have also been made to the European Union Law. …
Download full paper File format: .doc, available for editing
HIDE THIS PAPERGRAB THE BEST PAPER96.4% of users find it useful 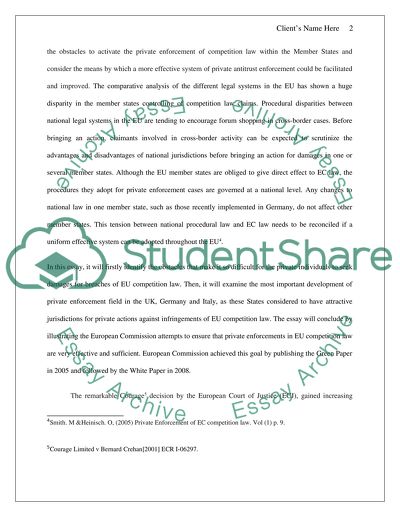 Download file to see previous pages This essay discusses that since last twenty years, the enforcement of European competition law has major changes. Particularly the enactment of Regulation 1/2003 that brought a remarkable shift towards the decentralized enforcement of the competition rules and the opportunity for the national courts to rule on private antitrust cases.However, the position of private enforcement of European competition law is less clear than the status of the public enforcement within the European Competition Network that seems to become a significant achievement. According to a study on the condition of claims for damages in case of infringements of EC competition rules in August 2004 (which was prepared for the European Commission), it concluded “The picture that emerges from the present study on damages actions for breach of competition law in the enlarged EU is one of astonishing diversity and total underdevelopment".As a result of that comparative report, the European Commission was able to identify the obstacles to activate the private enforcement of competition law within the Member States and consider the means by which a more effective system of private antitrust enforcement could be facilitated and improved. The comparative analysis of the different legal systems in the EU has shown a huge disparity in the member states controlling of competition law claims. Procedural disparities between national legal systems in the EU are tending to encourage forum shopping in cross-border cases. Before bringing an action, claimants involved in cross-border activity can be expected to scrutinize the advantages and disadvantages of national jurisdictions before bringing an action for damages in one or several member states. Although the EU member states are obliged to give direct effect to EC law, the procedures they adopt for private enforcement cases are governed at a national level. Any changes to national law in one member state, such as those recently implemented in Germany, do not affect other member states. This tension between national procedural law and EC law needs to be reconciled if a uniform effective system can be adopted throughout the EU4. In this essay, it will firstly identify the obstacles that make it so difficult for the private individuals to seek damages for breaches of EU competition law. Then, it will examine the most important development of private enforcement field in the UK, Germany and Italy, as these States considered to have attractive jurisdictions for private actions against infringements of EU competition law. The essay will conclude by illustrating the European Commission attempts to ensure that private enforcements in EU competition law are very effective and sufficient. European Commission achieved this goal by publishing the Green Paper in 2005 and followed by the White Paper in 2008. The remarkable Courage5 decision by the European Court of Justice (ECJ), gained increasing attention in which the private individuals have the right to sue for damages as a consequence of infringements of EC competition rules, (particularly damages suffered from breaches of Art 101 and Art 102 TFEU). One of the most important reasons of the long absence of the private antirust from the competition policy is the unique system of Europe. This means that the European Commission and European Courts have a slight influence on private antitrust litigations since they are very present in public competition law enforcement. Moreover, the European Courts are not competent to hear claims on private enforceme ...Download file to see next pages Read More
Share:
Tags
Cite this document
(“He ability of private individuals to seek damages for breaches in the Essay”, n.d.)
Retrieved from https://studentshare.org/law/1394426-he-ability-of-private-individuals-to-seek-damages-for-breaches-in-the-eu-competition-law

(He Ability of Private Individuals to Seek Damages for Breaches in the Essay)
https://studentshare.org/law/1394426-he-ability-of-private-individuals-to-seek-damages-for-breaches-in-the-eu-competition-law.

“He Ability of Private Individuals to Seek Damages for Breaches in the Essay”, n.d. https://studentshare.org/law/1394426-he-ability-of-private-individuals-to-seek-damages-for-breaches-in-the-eu-competition-law.
Comments (0)
Click to create a comment or rate a document

In th...
8 Pages (2000 words) Case Study
sponsored ads
Save Your Time for More Important Things
Let us write or edit the essay on your topic "He ability of private individuals to seek damages for breaches in the EU competition law" with a personal 20% discount.
GRAB THE BEST PAPER

Let us find you another Essay on topic He ability of private individuals to seek damages for breaches in the EU competition law for FREE!