US foreign trade policy in the Middle East: a comparative analysis between Egypt, Jordan and Saudi Arabia - Dissertation Example

Comments (0)
Add to wishlist Delete from wishlist
Cite this document
Summary
The US having lost a large share of the global consumer market to developing countries and other developed was forced to abandon its protectionist stance and to adopt a liberalization approach to foreign trade policies. …
Download full paper File format: .doc, available for editing
HIDE THIS PAPERGRAB THE BEST PAPER96.4% of users find it useful 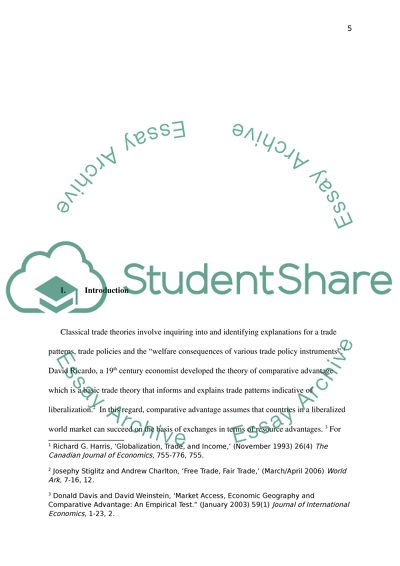 Extract of sample "US foreign trade policy in the Middle East: a comparative analysis between Egypt, Jordan and Saudi Arabia"

Download file to see previous pages US foreign trade policy in the Middle East: a comparative analysis between Egypt, Jordan and Saudi Arabia

Classical trade theories involve inquiring into and identifying explanations for a trade patterns, trade policies and the “welfare consequences of various trade policy instruments”. David Ricardo, a 19th century economist developed the theory of comparative advantage which is a basic trade theory that informs and explains trade patterns indicative of liberalization. In this regard, comparative advantage assumes that countries in a liberalized world market can succeed on the basis of exchanges in terms of resource advantages. For example, one country has an abundance of agricultural goods and another country has an abundance of automobile parts. The two countries can agree to trade their respective abundant resources to each other at relatively lower cost.
The US trade history and emerging patterns reflects comparative advantages domestically and internationally and tends to suggest a trend toward “global integration of production and distribution”. In terms of trade with the Middle East, the Middle East enjoys a comparative advantage in a number of sectors including crude oil, pharmaceuticals, plastics, colouring materials, footwear, textiles and fabrics. Giving the volatility of the Middle East and the US strong dependence on crude oil from the region, the US comparative advantage in terms of trade with the Middle East is coloured by a need to provide and ensure security in the region. 6 For the Middle East, access to US markets and capital provides virtually an absolute advantage in terms of economic development, technology transfers, improved competition and national production.7 This research study examines US trade policy in the Middle East by reference to case studies on US trade with Egypt, Jordan and Saudi Arabia. The trade policy and practices with each of the three countries are compared and contrasted with a view to demonstrating the extent to which the Ricardian doctrine of comparative advantage is sustained and rationalized. Thus this research study will explore and analyse US trade policies, trends and history generally and will tie this in with the US trade policies, trends and ambitions in the Middle East. Finally this paper will provide a more detailed study on the US trade policies, practices and ambitions with respect to Egypt, Jordan and Saudi Arabia. II. US Trade Policy, Practices and History: An Overview The current US trade policy is described as an outcome of struggles between two significant factions in the US: liberalization and protectionism.8 Trade liberalization has always been the dominant approach to US trade policy however.9 Be that as it may, the shift toward liberalization was a result of the disadvantages resulting from protectionism. Protectionism can be said to have officially ended in 1934 when the US having suffered a depression that was felt globally, enacted the Reciprocal Trade Agreements Act 1934.10 Previously, the US had a trade policy that was protectionist in structure and guided by the Smoot-Hawley Tariff Act 1930 which increased tariffs on imports to 53 per cent in 1931 and again to 59 per cent the following year in 1932.11 This protectionist stance had provided other states with the incentive to take a retaliatory stance toward the US and as a result world trade declined. In fact, between 1929 and 1933, world trade decreased by 25 per cent.12 Ultimately, the protectionist stance in US trade policy was calculated to protect the US’s domestic goods and markets and to safeguard against international competition.13 In this ...Download file to see next pages Read More
Share:
Tags
Cite this document
(“US foreign trade policy in the Middle East: a comparative analysis Dissertation”, n.d.)
Retrieved from https://studentshare.org/law/1394229-us-foreign-trade-policy-in-the-middle-east-a-comparative-analysis-between-egypt-jordan-and-saudi-arabia

(US Foreign Trade Policy in the Middle East: A Comparative Analysis Dissertation)
https://studentshare.org/law/1394229-us-foreign-trade-policy-in-the-middle-east-a-comparative-analysis-between-egypt-jordan-and-saudi-arabia.

CHECK THESE SAMPLES OF US foreign trade policy in the Middle East: a comparative analysis between Egypt, Jordan and Saudi Arabia

They are on trial and will be dealt with fairly. These laws ensure that no one, even if he or she has committed a crime is abused or punished cruelly.
Following the history of civilization like in china, we see the traces of systems for Criminal justice in order to provide safety for the citizens. Evolving through the years laws have been modified and changed to form the system that we know today.
From its start, the “U.S. criminal justice system” has advocated the idea of “checks and balances”. To avoid dictatorial rule, the people who founded this system in such a way that one person was not given control or authority completely to punish the criminals. The idea of assigning a ‘jury...
6 Pages (1500 words) Assignment
sponsored ads
Save Your Time for More Important Things
Let us write or edit the dissertation on your topic "US foreign trade policy in the Middle East: a comparative analysis between Egypt, Jordan and Saudi Arabia" with a personal 20% discount.
GRAB THE BEST PAPER

Let us find you another Dissertation on topic US foreign trade policy in the Middle East: a comparative analysis between Egypt, Jordan and Saudi Arabia for FREE!