Comments (0)
Add to wishlistDelete from wishlist
Cite this document
Summary
No doubts oil spills are responsible for the plight of coastal communities, economic losses experienced in some global nations, as well as climatic change (Read 42). It is true that Arctic regions experience high risks of oil pollution resulting from oil spills as compared to Antarctic regions. …
Download full paperFile format: .doc, available for editing
HIDE THIS PAPERGRAB THE BEST PAPER97.2% of users find it useful 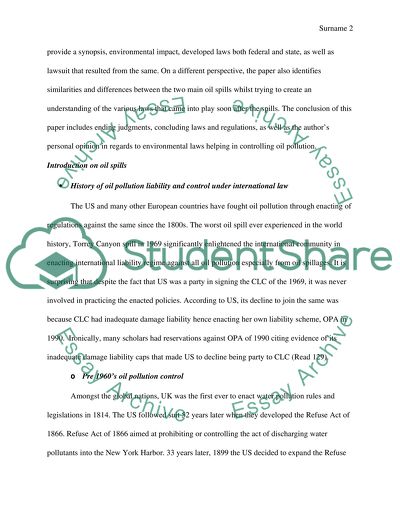 Download file to see previous pages Climatic changes and economic losses are a characteristic of many nations in the current global arena. Funny enough, these problems are directly congruent to environmental pollution reducible through proper laws, rules, regulations, and measures.
The following discussion entails comparative environmental law on oil spills. This paper provides the history of oil pollution and control under international law, which have been in existence from the classical period to contemporary world. In addition, the paper also focuses on the BP Gulf and Exxon Valdez Oil spills. While discussing these two, these paper attempts to provide a synopsis, environmental impact, developed laws both federal and state, as well as lawsuit that resulted from the same. On a different perspective, the paper also identifies similarities and differences between the two main oil spills whilst trying to create an understanding of the various laws that came into play soon after the spills. The conclusion of this paper includes ending judgments, concluding laws and regulations, as well as the author’s personal opinion in regards to environmental laws helping in controlling oil pollution.
Introduction on oil spills
• History of oil pollution liability and control under international law
The US and many other European countries have fought oil pollution through enacting of regulations against the same since the 1800s.
The worst oil spill ever experienced in the world history, Torrey Canyon spill in 1969 significantly enlightened the international community in enacting international liability regime against all oil pollution especially from oil spillages. It is surprising that despite the fact that US was a party in signing the CLC of the 1969, it was never involved in practicing the enacted policies. According to US, its decline to join the same was because CLC had inadequate damage liability hence enacting her own liability scheme, OPA in 1990. Ironically, many scholars had reservations against OPA of 1990 citing evidence of its inadequate damage liability caps that made US to decline being party to CLC (Read 129). Pre 1960’s oil pollution control Amongst the global nations, UK was the first ever to enact water pollution rules and legislations in 1814. The US followed suit 52 years later when they developed the Refuse Act of 1866. Refuse Act of 1866 aimed at prohibiting or controlling the act of discharging water pollutants into the New York Harbor. 33 years later, 1899 the US decided to expand the Refuse Act to include all navigable waters taking into considerations that its initial aim was to protect New York Harbor. Demand for oil increased considerably due to advancing technology, which called for greater energy needs especially in the beginning of the 20th century. Consequently, the world had to extract more oil to meet the increased energy needs. This led to increased oil pollution forcing the US in 1924 to develop Oil Pollution Act of 1924. The Oil Pollution Act of 1924 was to make it illegal for any individual to dump oil into all coastal waters within the United States of America. Moreover, 24 years later, US developed another legislation known as the Federal Water Pollution ...Download file to see next pagesRead More
Share:
Tags
Cite this document
(“Comparative Environmental Law on Oil Spills Essay”, n.d.)
Retrieved from https://studentshare.org/law/1394079-comparative-environmental-law-on-oil-spills

CHECK THESE SAMPLES OF Comparative Environmental Law on Oil Spills

In th...
8 Pages(2000 words)Case Study
sponsored ads
Save Your Time for More Important Things
Let us write or edit the essay on your topic "Comparative Environmental Law on Oil Spills" with a personal 20% discount.
GRAB THE BEST PAPER

Let us find you another Essay on topic Comparative Environmental Law on Oil Spills for FREE!