Comments (0)
Add to wishlist Delete from wishlist
Cite this document
Summary
The discussion establishes that corporate social responsibility is a crucial responsibility for corporations including banks. In the current UK and European context, the CSR practices of banks have been established through policies and voluntary practices. …
Download full paper File format: .doc, available for editing
HIDE THIS PAPERGRAB THE BEST PAPER92.4% of users find it useful 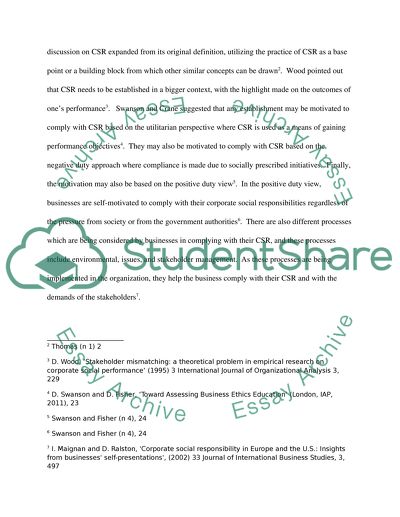 Download file to see previous pages Center of discussion in this paper is the concept of corporate social responsibility or CSR that can be understood in the sense of companies voluntarily incorporating their social and environmental considerations in their activities and in their interactions with their stakeholders. CSR therefore involves ethical and moral considerations impacting on the corporate decision-making processes and behaviours. The discussion on CSR expanded from its original definition, utilizing the practice of CSR as a base point or a building block from which other similar concepts can be drawn. Wood pointed out that CSR needs to be established in a bigger context, with the highlight made on the outcomes of one’s performance. Swanson and Crane suggested that any establishment may be motivated to comply with CSR based on the utilitarian perspective where CSR is used as a means of gaining performance objectives. They may also be motivated to comply with CSR based on the negative duty approach where compliance is made due to socially prescribed initiatives. Finally, the motivation may also be based on the positive duty view. In the positive duty view, businesses are self-motivated to comply with their corporate social responsibilities regardless of the pressure from society or from the government authorities. There are also different processes which are being considered by businesses in complying with their CSR, and these processes include environmental, issues, and stakeholder management. As these processes are being implemented in the organization, they help the business comply with their CSR and with the demands of the stakeholders7. The responsibility of businesses to general society has been a major source of debate throughout the years. Issues in its implementation include the fact that CSR has long been a contested policy as questions on its benefits have been raised consistently8. Various issues on the definition and coverage of the CSR have also been raised. Its coverage has spanned a wide range of considerations throughout the years with its concerns on the environment, on human rights considerations, and on the fair treatment of the consuming public. Regardless of these issues, the concept of CSR is founded on the socio-political and economic concept of transparency, as well as sensitivity to the consequences of corporate actions9. The increased scrutiny and frequent changes in CSR policies are all part of the current trend towards making CSR more responsive to the needs of the people, the stakeholders, and the environment. Amidst growing concerns for environmental and cultural concerns, CSR policies are also being adjusted and conceptualized, giving the concerned individuals or groups the chance to make better business choices. In relation to banks, their decisions and policies in relation to CSR have been slow in coming even when their overall impact on the economy has always been considered significant10. The initial consideration of banks as ...Download file to see next pages Read More
Share:
Tags
Cite this document
(“Corporate Social Responsibility Issues in Business and Law Essay”, n.d.)
Retrieved from https://studentshare.org/law/1394045-corporate-social-responsibility-issues-in-business-and-law

The Census Bur...
6 Pages (1500 words) Assignment
sponsored ads
Save Your Time for More Important Things
Let us write or edit the essay on your topic "Corporate Social Responsibility Issues in Business and Law" with a personal 20% discount.
GRAB THE BEST PAPER

Let us find you another Essay on topic Corporate Social Responsibility Issues in Business and Law for FREE!