Comments (0)
Add to wishlistDelete from wishlist
Cite this document
Summary
It is now well settled that stakeholders in a corporate entity are not only its shareholders but also its employees, suppliers, customers and the public. Hence a corporate entity is responsible to all these stakeholders. Depending on the business activity of the corporate entity, its responsibility will vary in respect of environment though predominantly it is the public, which have environmental stake in a given corporate entity…
Download full paperFile format: .doc, available for editing
HIDE THIS PAPERGRAB THE BEST PAPER91.6% of users find it useful 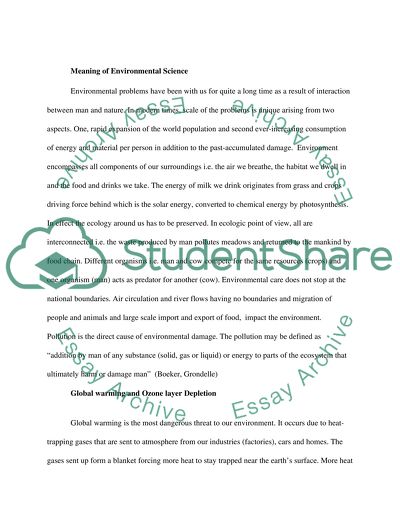 Download file to see previous pages It has been reported that in the last 30 years, nearly 1/3 of world's natural resources have been lost because of corporations' industrial activities. (Friends of earth)
The aim of the social responsibility is to effect a higher and higher standard of living while at the same maintaining the profitability of the corporation (Hopkins) Therefore corporate social responsibility involves community, environment, ethics, human rights, responsibility in the market, vision and values, and workforce. We are immediately concerned with the environment. This involves management decision making in respect of production processes that minimise negative impacts on the environment and the costs.
Environmental problems have been with us for quite a long time as a result of interaction between man and nature. In modern times, scale of the problems is unique arising from two aspects. One, rapid expansion of the world population and second ever-increasing consumption of energy and material per person in addition to the past-accumulated damage. Environment encompasses all components of our surroundings i.e. the air we breathe, the habitat we dwell in and the food and drinks we take. The energy of milk we drink originates from grass and crops driving force behind which is the solar energy, converted to chemical energy by photosynthesis. In effect the ecology around us has to be preserved. In ecologic point of view, all are interconnected i.e. the waste produced by man pollutes meadows and returned to the mankind by food chain. Different organisms i.e. man and cow compete for the same resources (crops) and one organism (man) acts as predator for another (cow). Environmental care does not stop at the national boundaries. Air circulation and river flows having no boundaries and migration of people and animals and large scale import and export of food, impact the environment. Pollution is the direct cause of environmental damage. The pollution may be defined as "addition by man of any substance (solid, gas or liquid) or energy to parts of the ecosystem that ultimately harm or damage man" (Boeker, Grondelle)
Global warming and Ozone layer Depletion
Global warming is the most dangerous threat to our environment. It occurs due to heat-trapping gases that are sent to atmosphere from our industries (factories), cars and homes. The gases sent up form a blanket forcing more heat to stay trapped near the earth's surface. More heat produces more energy in the atmosphere resulting in extreme weather conditions like droughts, storms and floods. Elsner James, Professor Florida State University on researching the past 135 years of records of Atlantic Sea surface and air temperatures, found a direct link to the intensities of hurricanes and many hurricane researchers affirm that the intensity increased 10 years ago could last for the next 25 to 40 years. (Loney Jim) Another phenomenon now coming under control after two decades of remedial measures is Ozone layer depletion, though it will be by 2049 when the 1980 levels will be restored. (Reuters) Ozone layer being part of the ...Download file to see next pagesRead More
Share:
Tags
Cite this document
(“Corporate Social Responsibility (Environmental Science) Essay”, n.d.)
Corporate Social Responsibility (Environmental Science) Essay. Retrieved from https://studentshare.org/miscellaneous/1534056-corporate-social-responsibility-environmental-science

... Mansfield. Lord Mansfield though rejected Carter’s claim for not having disclosed the material facts, he cited an example of the insurer insuring the ship knowing full well that it had already arrived. He observed that good faith prohibited either party from hiding the fact so as to tempt the other into a bargain. The principle of mutual responsibility of disclosure was challenged by the underwriters in Banque financiere de la Cite SA v Westgate Insurance Company Ltd2. Although a non- marine case, it may be relevant for the purpose of utmost good faith principle. A group of banks advanced monies to four companies represented by one Mr Ballestro on the basis credit insurance policies. The gemstones deposited as security for the loan turned...
6 Pages(1500 words)Case Study

Soon a retail industry was built up and the community began to grow and is considered to be a society with a civic nature (Learning Communities in Education and Training, 2009). The community of Broken Hill can be considered to be highly diverse with a census that was conducted in the area in 1996 showed that out of the then population there were 961 people who came from overseas and a large amount of those was not from an English speaking nation. The large composition of the population in the community at the time was aboriginals or Torres Strait Islanders. Broken Hill thus shows a varying ethnic community and a diverse mindset considering a large proportion of the people are from nations such as Greece, Malta and even Italy (Lea...
6 Pages(1500 words)Case Study
sponsored ads
Save Your Time for More Important Things
Let us write or edit the essay on your topic "Corporate Social Responsibility (Environmental Science)" with a personal 20% discount.
GRAB THE BEST PAPER

Let us find you another Essay on topic Corporate Social Responsibility (Environmental Science) for FREE!