Comments (0)
Add to wishlist Delete from wishlist
Cite this document
Summary
In the paper “The Law of International Trade: Nike Shoes” the author analyzes rights for claiming damages under the Sale of Goods Act 1979 for the defective product supplied. Defective products victim can claim compensation either under SOGA or under CPA or under the Law of Contract (LOC)…
Download full paper File format: .doc, available for editing
HIDE THIS PAPERGRAB THE BEST PAPER97.4% of users find it useful 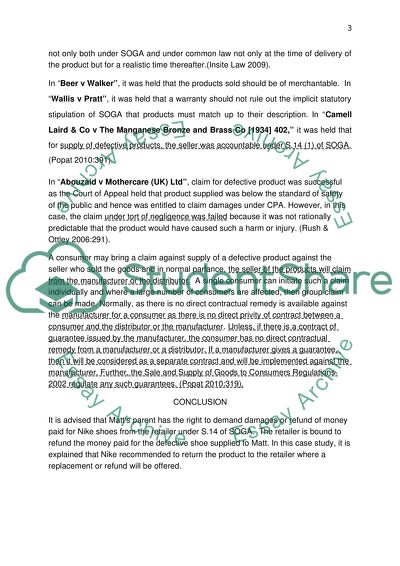 Extract of sample "The Law of International Trade: Nike Shoes"

Download file to see previous pages In the three scenarios, the terms may be inferred from a contract. (i) In fact- where the contract consists of no specific term but the signatories to contract must have in mind to be included in the same (ii) By law – the provisions contained in Sale of Goods Act 1979 (SOGA). (iii) BY customs followed by the contracting parties. Thus, there exists an implied term of any sale of product contract between a consumer and a commercial seller or between two commercial sellers themselves, that as per S.14 of SOGA, products sold are of reasonably suitable for their purpose and of satisfactory quality and as per S.1 of SOGA, products adhere with any available sample or any description. It is to be observed that a seller will be held accountable for infringement of these implicit terms. (Popat 2010: 319). Under SOGA, if a defective product has been supplied, then it would result in the basic infringement of the contract and hence, the buyer can either seek damages or repayment of purchase price or reject the product itself. As per s.14 of SOGA, the product should of satisfactory quality.
In “Camell Laird & Co v The Manganese Bronze and Brass Co [1934] 402,” it was held that for the supply of defective products, the seller was accountable under S.14 (1) of SOGA. (Popat 2010:391). In “Abouzaid v Mothercare (UK) Ltd”, claim for the defective product as successful as the Court of Appeal held that product supplied was below the standard of safety of the public and hence was entitled to claim damages under CPA. However, in this case, the claim under the tort of negligence was failed because it was not rationally predictable that the product would have caused such harm or injury. (Rush & Ottley 2006:291). A consumer may bring a claim against the supply of a defective product against the seller who sold the goods and in normal parlance, the seller of the products will claim from the manufacturer or the distributor. A single consumer can initiate such a claim individually and where a large number of consumers are affected, then a group claim can be made. Normally, as there is no direct contractual remedy is available against the manufacturer for a consumer as there is no direct privity of contract between a consumer and the distributor or the manufacturer. Unless, if there is a contract of guarantee issued by the manufacturer, the consumer has no direct contractual remedy from a manufacturer or a distributor. If a manufacturer gives a guarantee, then it will be considered as a separate contract and will be implemented against the manufacturer. Further, the Sale and Supply of Goods to Consumers Regulations 2002 regulate any such guarantees. (Popat 2010:319). CONCLUSION It is advised that Matt’s parent has the right to demand damages or refund of money paid for Nike shoes. ...Download file to see next pages Read More
Share:
Tags
Cite this document
(The Law of International Trade: Nike Shoes Case Study, n.d.)
The Law of International Trade: Nike Shoes Case Study. Retrieved from https://studentshare.org/law/1394027-business-law

CHECK THESE SAMPLES OF The Law of International Trade: Nike Shoes

As a matter of fact, Hoffman’s statement that “international affairs is the nemesis of liberalism” has a grain of truth in it and this is especially so after the 9/11 incident.
There are two schools of thought or perspectives that are used to view international affairs: liberalism and realism. The study of these two perspectives is significant to the idea posed by Stanley Hoffman because they determine the reasons why international affairs, according to him, does not only see eye-to-eye with liberalism but seems to stand on the opposing side of it.
Liberalism can be defined as having four elements: citizens; the legislature; property rights, and; a market-driven economy (Dunne 186). Realism, on the othe...
6 Pages (1500 words) Assignment
sponsored ads
Save Your Time for More Important Things
Let us write or edit the case study on your topic "The Law of International Trade: Nike Shoes" with a personal 20% discount.
GRAB THE BEST PAPER

Let us find you another Case Study on topic The Law of International Trade: Nike Shoes for FREE!