Comments (0)
Add to wishlist Delete from wishlist
Cite this document
Summary
Internet Law The lack of specific legal basis from case laws and other existing statutes makes it hard to govern transactions consummated over the internet1. The problem is compounded when the customer is within the United Kingdom and the company providing the product or the service is outside the United Kingdom2…
Download full paper File format: .doc, available for editing
HIDE THIS PAPERGRAB THE BEST PAPER94.8% of users find it useful 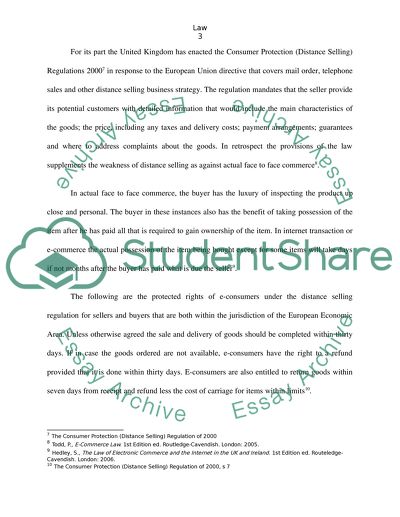 Download file to see previous pages Jurisdiction remains largely an issue with regards to internet transaction because of the intrinsic characteristics of the internet and those who uses it5. The European Union recognizing the borderless nature of internet commerce that may affect its member nations have created a body of law through the European Economic Area. Ratified and agreed on in May 1997 the European Union directive6 has provided a framework for trade in order for member states to enact similar laws that would complement the laws enacted by other European Union members that would address in part e-commerce or transactions consummated over the internet. The caveat however is that this body of laws remain enforced and effective within the European Economic Area only. For its part the United Kingdom has enacted the Consumer Protection (Distance Selling) Regulations 20007 in response to the European Union directive that covers mail order, telephone sales and other distance selling business strategy. The regulation mandates that the seller provide its potential customers with detailed information that would include the main characteristics of the goods; the price, including any taxes and delivery costs; payment arrangements; guarantees and where to address complaints about the goods. In retrospect the provisions of the law supplements the weakness of distance selling as against actual face to face commerce8. In actual face to face commerce, the buyer has the luxury of inspecting the product up close and personal. The buyer in these instances also has the benefit of taking possession of the item after he has paid all that is required to gain ownership of the item. In internet transaction or e-commerce the actual possession of the item being bought except for some items will take days if not months after the buyer has paid what is due the seller9. The following are the protected rights of e-consumers under the distance selling regulation for sellers and buyers that are both within the jurisdiction of the European Economic Area. Unless otherwise agreed the sale and delivery of goods should be completed within thirty days. If in case the goods ordered are not available, e-consumers have the right to a refund provided that it is done within thirty days. E-consumers are also entitled to return goods within seven days from receipt and refund less the cost of carriage for items within limits10. It should be noted however that there are exceptions to this rule normally perishable goods, custom-made-goods and dated goods such as journals and publications are exempt for refund. Buyers also have the right to cancel payments for goods that have been ordered through fraud. The logic of this provision is to protect the interest of both seller and buyer in cases where losses are likely to occur because items are either unique that no other buyer will get it or items have become useless due to spoilage11. Due to the increased efficiency and convenience experienced in using the internet to transact business more and more people gravitates towards this mode of commerce because of the ease and comfort it provides its users. The drawback however of internet transaction is the increased risk for fraud and the difficulty of recovering the money used in the transaction not to mention the prosecution of the culprits responsible12. Thus, the government fully supported an accreditation scheme for internet traders named “ ...Download file to see next pages Read More
Share:
Tags
Cite this document
(“Internet law Essay Example | Topics and Well Written Essays - 3500 words”, n.d.)
Retrieved from https://studentshare.org/law/1393956-internet-law

CHECK THESE SAMPLES OF Internet law

In th...
8 Pages (2000 words) Case Study
sponsored ads
Save Your Time for More Important Things
Let us write or edit the essay on your topic "Internet law" with a personal 20% discount.
GRAB THE BEST PAPER

Let us find you another Essay on topic Internet law for FREE!