Comments (0)
Add to wishlist Delete from wishlist
Cite this document
Summary
The analysis first will turn on the general provisions regarding the passing of risk and the doctrine of impossibility, which would be relevant here because the war is what prevented the ship from reaching its destination. …
Download full paper File format: .doc, available for editing
HIDE THIS PAPERGRAB THE BEST PAPER96.9% of users find it useful 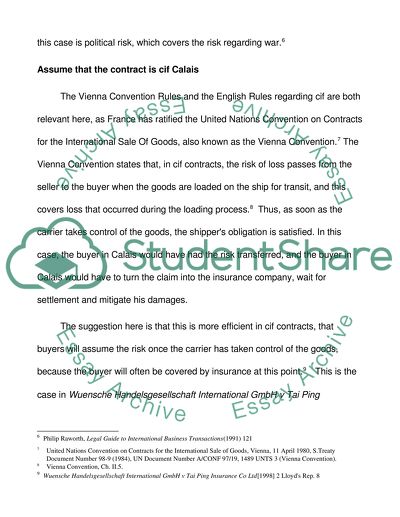 Download file to see previous pages There are three different ways that the transfer of risk may occur. The first is at the time of the conclusion of the contract for sale, the time of passing of the property in goods, and the time of the delivery of the goods. These rules may only come into effect when the parties did not contract for the transfer of risk, as is the case here. Furthermore, while the parties typically have insurance, which mitigates the risk of loss, it is still important to determine who bears the risk of loss, as the party who bears the risk of the loss is the party who is responsible for turning the loss into the insurance company, as well as await settlement from the insurance company and mitigate the damages. While risk may come from many different sources, the example in this case is political risk, which covers the risk regarding war.
Assume that the contract is cif Calais
The Vienna Convention Rules and the English Rules regarding cif are both relevant here, as France has ratified the United Nations Convention on Contracts for the International Sale Of Goods, also known as the Vienna Convention. The Vienna Convention states that, in cif contracts, the risk of loss passes from the seller to the buyer when the goods are loaded on the ship for transit, and this covers loss that occurred during the loading process. Thus, as soon as the carrier takes control of the goods, the shipper's obligation is satisfied. In this case, the buyer in Calais would have had the risk transferred, and the buyer in Calais would have to turn the claim into the insurance company, wait for settlement and mitigate his damages.
...
be covered by insurance at this point.9 This is the case in Wuensche Handelsgesellschaft International GmbH v Tai Ping Insurance Co Ltd10 in which it was decided that, in a case where cans coming from China to Germany were dented before being put upon the ship, that the seller, and the seller's insurance, assumed the risk during the pre-shipment period of time. Other rules regarding cif contracts regard the transfer of the risk once the ship is afloat. The standard English rule regarding this is that, when the goods are specific or have been appropriated, the seller may tender the documents regarding the goods to the buyer, even when the seller knows that the goods have been totally lost- therefore, at the time that the documents are tendered, the risk would pass from the seller to the buyer.11 As long as the goods were in conformity with the contract at the time that the seller shipped them, then the buyer may not reject these documents.12 This is the English Rule, and is exemplified in the case of The Kronprinsessen Margareta.13 In that case, the court stated that if the seller would have taken the bills of lading to their own order, then the risk would have passed to the buyer for the loss, without question. However, they did not, and the bills of lading were retained by the seller, so the case was more complicated. The Convention Rule, while not specifically addressing cif contracts regarding goods which are lost at sea, nevertheless states that risk passes from the conclusion of the contract. In this case, the retrospective transfer, which means that the risk transfers upon shipment, may only be possible when the circumstances indicate (such as the parties bargained for this, or the insurance covers this specifically), and the seller did not know that the goods ...Download file to see next pages Read More
Share:
Tags
Cite this document
(“International trade law Essay Example | Topics and Well Written Essays - 3750 words”, n.d.)
Retrieved from https://studentshare.org/law/1393952-international-trade-law

As a matter of fact, Hoffman’s statement that “international affairs is the nemesis of liberalism” has a grain of truth in it and this is especially so after the 9/11 incident.
There are two schools of thought or perspectives that are used to view international affairs: liberalism and realism. The study of these two perspectives is significant to the idea posed by Stanley Hoffman because they determine the reasons why international affairs, according to him, does not only see eye-to-eye with liberalism but seems to stand on the opposing side of it.
Liberalism can be defined as having four elements: citizens; the legislature; property rights, and; a market-driven economy (Dunne 186). Realism, on the othe...
6 Pages (1500 words) Assignment
sponsored ads
Save Your Time for More Important Things
Let us write or edit the essay on your topic "International trade law" with a personal 20% discount.
GRAB THE BEST PAPER

Let us find you another Essay on topic International trade law for FREE!