Comments (1)
Add to wishlistDelete from wishlist
Cite this document
Summary
The Republic of China was established in 1949 and was influenced largely by the Soviet system of socialist law. However, the traditions of the Chinese law and history have been retained by the new law of the country. China’s legal system is now undergoing some reformatory changes. …
Download full paperFile format: .doc, available for editing
HIDE THIS PAPERGRAB THE BEST PAPER96.8% of users find it useful 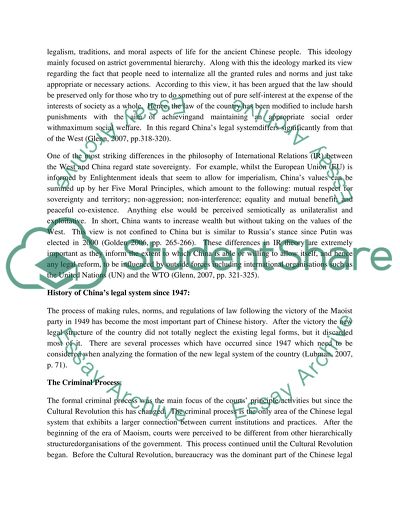 Download file to see previous pages These changes are occurring because of the fact that in order to strengthen the rule of law it is foremost necessary to place emphasis on a large number of elements, both from inside and outside of the country. Also the structure of the domestic law of the country is facing several transformations in the face of growing international trade and globalization. The legal systemis undergoing the most radical changes since their inclusion within the World Trade Organization (WTO). The country has largely been dependent on ideological reasoning and facts. But recently policy makers have suggested that in order to cope with international standards of respectable community, the country must follow specified globally accepted norms and regulations, irrespective of the fact that these norms and regulations are generated by the United Nations Human Rights Conservation or by the WTO (Bruun & Jacobsen, 2000, p. 251). Accordingly the country’s law and legal system have had to be changed and modified. The Republic of China is now initiating these changes or modifications with the most radical occurring in the areas of economic reform and changes in the nature of the administration process. This paper will attempt to evaluate all of these developments and will mark the difficulties or the challenges that china has been facing as a direct result (Alexandroff, Ostry and Rafael Gomez, 2003, p. 154).
Philosophy:
The Asian legal system appears to be different in many respects from the legal systems of therest of the world. Major reasons for this include spiritual variations and differences in intellectual thought. Religion plays little part in Chinese law-making but perhaps the most influential form of thought is Confucianism (Glenn 2007, pp. 318-319). The core of Confucianism is Humanism and is based on various levels of honesty. According to Confucian thought, with the use of the logic of humanity one can examine the world in the simplest possible manner. An ethical philosophy that is to be practiced by all the members of this society is the primary foundation and function of this thought. For almost a thousand years the legal system of China was dominated by Confucianism. The principles of Confucian ideology were the main driving force behind the evolution of the ancient legal system. Not only that, it also helped in developing the legalism, traditions, and moral aspects of life for the ancient Chinese people. This ideology mainly focused on astrict governmental hierarchy. Along with this the ideology marked its view regarding the fact that people need to internalize all the granted rules and norms and just take appropriate or necessary actions. According to this view, it has been argued that the law should be preserved only for those who try to do something out of pure self-interest at the expense of the interests of society as a whole. Hence, the law of the country has been modified to include harsh punishments with the aim of achievingand maintaining an appropriate social order withmaximum social welfare. In this regard China’s legal systemdiffers significantly from that of the West ...Download file to see next pagesRead More
Share:
Tags
Cite this document
(“Development of Chinas legal system and its difficulties and challenges Essay”, n.d.)
Retrieved from https://studentshare.org/law/1393949-development-of-chinas-legal-system-and-its-difficulties-and-challenges

ni
nina86 added comment 2 years ago
Student rated this paper as
This document saved me today. I liked the content. It was very useful for my law course.

Liberalism and Its Aspects

After listing out the shades of liberalist thinking, the main point of this paper is that for the times that we live in, Liberalism is best suited as an alternative to the prevailing ideologies of the time. The world took a dangerous turn in the aftermath of the 9/11 attacks on the US. The resulting “War on Terror” that followed took a toll on individual liberties and it appears to be that liberal values and liberalism have been buried in the rancor that characterized the last eight years. The very nature of the individual and his or her role in the nation-state has been tested and the notion of liberties questioned. However, there seems to be a tendency towards reclaiming the premises of liberalism namely that of indi...
12 Pages(3000 words)Coursework

They are on trial and will be dealt with fairly. These laws ensure that no one, even if he or she has committed a crime is abused or punished cruelly.
Following the history of civilization like in china, we see the traces of systems for Criminal justice in order to provide safety for the citizens. Evolving through the years laws have been modified and changed to form the system that we know today.
From its start, the “U.S. criminal justice system” has advocated the idea of “checks and balances”. To avoid dictatorial rule, the people who founded this system in such a way that one person was not given control or authority completely to punish the criminals. The idea of assigning a ‘jury...
6 Pages(1500 words)Assignment
sponsored ads
Save Your Time for More Important Things
Let us write or edit the essay on your topic "Development of Chinas legal system and its difficulties and challenges" with a personal 20% discount.
GRAB THE BEST PAPER

Let us find you another Essay on topic Development of Chinas legal system and its difficulties and challenges for FREE!