Criminal Law: Sighting and evaluating the cause - Essay Example

Comments (0)
Add to wishlist Delete from wishlist
Cite this document
Summary
Name of Author Name of Instructor Subject 4th December 2011 Criminal Law: Sighting and Evaluating the Cause It is believed that the comprehension and characterization of rules and regulations, structuring and functioning, and formulation with regard to crime and its evaluation is called criminal law…
Download full paper File format: .doc, available for editing
HIDE THIS PAPERGRAB THE BEST PAPER91.1% of users find it useful 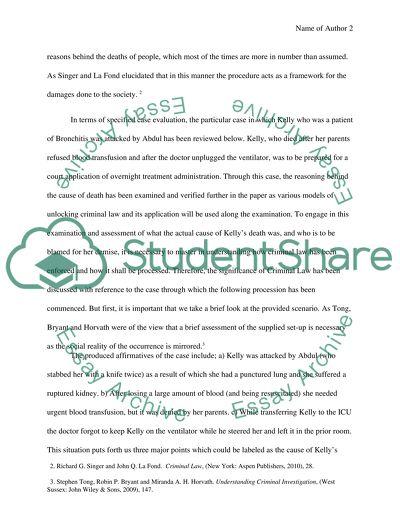 Extract of sample "Criminal Law: Sighting and evaluating the cause"

Download file to see previous pages With reference to the society and its organization by the implementation and procession of various criminal laws, it is now a fact that the studying of criminal law as subjects and majors has now become commonly increased in our society. Numbers of organizations are now offering courses in recognizing criminal law. This has lead to an increase in the awareness among people of the society and has lead to a decrease in crimes like murder and assassination, and other massacres. Thus, criminal law is of great worth in unlocking cases of crimes and unearthing the reasons behind the deaths of people, which most of the times are more in number than assumed. As Singer and La Fond elucidated that in this manner the procedure acts as a framework for the damages done to the society. 2 In terms of specified case evaluation, the particular case in which Kelly who was a patient of Bronchitis was attacked by Abdul has been reviewed below. Kelly, who died after her parents refused blood transfusion and after the doctor unplugged the ventilator, was to be prepared for a court application of overnight treatment administration. Through this case, the reasoning behind the cause of death has been examined and verified further in the paper as various models of unlocking criminal law and its application will be used along the examination. To engage in this examination and assessment of what the actual cause of Kelly’s death was, and who is to be blamed for her demise, it is necessary to master in understanding how criminal law has been enforced and how it shall be processed. Therefore, the significance of Criminal Law has been discussed with reference to the case through which the following procession has been commenced. But first, it is important that we take a brief look at the provided scenario. As Tong, Bryant and Horvath were of the view that a brief assessment of the supplied set-up is necessary as the social reality of the occurrence is mirrored.3 The produced affirmatives of the case include; a) Kelly was attacked by Abdul (who stabbed her with a knife twice) as a result of which she had a punctured lung and she suffered a ruptured kidney. b) After losing a large amount of blood (and being resuscitated) she needed urgent blood transfusion, but it was denied by her parents. c) While transferring Kelly to the ICU the doctor forgot to keep Kelly on the ventilator while he steered her and left it in the prior room. This situation puts forth us three major points which could be labeled as the cause of Kelly’s death as their contribution is so close to her death that it is almost equal to the involvement, but according to a model of study conducted by Schlesinge and Tumber it was verified that such cases in Criminal Law sketch the involved personnel’s images very well.4 In order to analyze this situation it is better that an understanding of what various criminal law investigation procedures denote and signify. This has been done by using the most important model of unlocking Criminal Law in the paper which has been put forth by Martin and Storey, and Herring’s model of assessing a crime scene.5 Thus, through the above mentioned ...Download file to see next pages Read More
Share:
Tags
Cite this document
(“Criminal Law: Sighting and evaluating the cause Essay”, n.d.)
Retrieved from https://studentshare.org/law/1393408-criminal-law

(Criminal Law: Sighting and Evaluating the Cause Essay)
https://studentshare.org/law/1393408-criminal-law.

“Criminal Law: Sighting and Evaluating the Cause Essay”, n.d. https://studentshare.org/law/1393408-criminal-law.
Comments (0)
Click to create a comment or rate a document

CHECK THESE SAMPLES OF Criminal Law: Sighting and evaluating the cause

They are on trial and will be dealt with fairly. These laws ensure that no one, even if he or she has committed a crime is abused or punished cruelly.
Following the history of civilization like in china, we see the traces of systems for Criminal justice in order to provide safety for the citizens. Evolving through the years laws have been modified and changed to form the system that we know today.
From its start, the “U.S. criminal justice system” has advocated the idea of “checks and balances”. To avoid dictatorial rule, the people who founded this system in such a way that one person was not given control or authority completely to punish the criminals. The idea of assigning a ‘jury...
6 Pages (1500 words) Assignment
sponsored ads
Save Your Time for More Important Things
Let us write or edit the essay on your topic "Criminal Law: Sighting and evaluating the cause" with a personal 20% discount.
GRAB THE BEST PAPER

Let us find you another Essay on topic Criminal Law: Sighting and evaluating the cause for FREE!