Comments (0)
Add to wishlistDelete from wishlist
Cite this document
Summary
Family Law Question 1 Cheryl Murdock Address Date Dear Mrs. Murdock, RE: Divorce and Ancillary/Interim Relief and Custody/Maintenance Matters Pursuant to your instructions we have reviewed the relevant facts, circumstances and the relevant law. We would advise that in the interest of time, cost and efficiency that your divorce should as far as possible, proceed on the less contentious grounds and that all efforts should be made to settle the ancillary matters prior to seeking a decree absolute…
Download full paperFile format: .doc, available for editing
HIDE THIS PAPERGRAB THE BEST PAPER98.1% of users find it useful 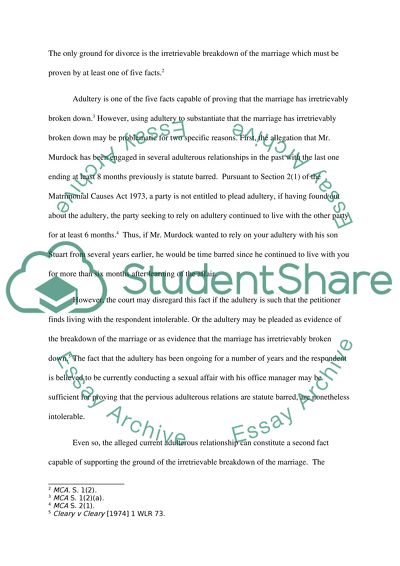 Download file to see previous pages The only ground for divorce is the irretrievable breakdown of the marriage which must be proven by at least one of five facts.2 Adultery is one of the five facts capable of proving that the marriage has irretrievably broken down.3 However, using adultery to substantiate that the marriage has irretrievably broken down may be problematic for two specific reasons. First, the allegation that Mr. Murdock has been engaged in several adulterous relationships in the past with the last one ending at least 8 months previously is statute barred. Pursuant to Section 2(1) of the Matrimonial Causes Act 1973, a party is not entitled to plead adultery, if having found out about the adultery, the party seeking to rely on adultery continued to live with the other party for at least 6 months.4 Thus, if Mr. Murdock wanted to rely on your adultery with his son Stuart from several years earlier, he would be time barred since he continued to live with you for more than six months after learning of the affair. However, the court may disregard this fact if the adultery is such that the petitioner finds living with the respondent intolerable. Or the adultery may be pleaded as evidence of the breakdown of the marriage or as evidence that the marriage has irretrievably broken down.5 The fact that the adultery has been ongoing for a number of years and the respondent is believed to be currently conducting a sexual affair with his office manager may be sufficient for proving that the pervious adulterous relations are statute barred, are nonetheless intolerable. Even so, the alleged current adulterous relationship can constitute a second fact capable of supporting the ground of the irretrievable breakdown of the marriage. The problem with pleading adultery is that the courts require proof of the adultery. The standard is based on the civil standard which requires evidence showing that on a balance of probabilities, the respondent has committed adultery. Thus, an admission of adultery by the respondent would be sufficient proof.6 At this point, Mr. Murdock has neither admitted or denied the adultery with his office manager, but simply stated that it was none of your business. He may however decide to admit to adultery since he states that he no longer wants to remain married to you. Aside from adultery, there appears to be sufficient evidence of behaviour pursuant to Section 1(2)(b) of the Matrimonial Causes Act 1973. Section 1(2)(b) provides that the breakdown of a marriage can be proved if the court is satisfied that: The respondent behaved in such a way that the petitioner cannot reasonably be expected to live with the respondent.7 This section has been interpreted to mean that it is not so much the respondent’s behaviour that concerns the court, but the petitioner’s feelings relative to living with the behaviour.8 Thus the fact that you have suffered depression since giving birth to Jack, the first child of the marriage, suggest that you might find living with the physical and verbal abuse intolerable and thus provide ...Download file to see next pagesRead More
Share:
Tags
Cite this document
(“Family Law Essay Example | Topics and Well Written Essays - 4000 words”, n.d.)
Retrieved from https://studentshare.org/law/1392899-client-practice
(Family Law Essay Example | Topics and Well Written Essays - 4000 Words)
https://studentshare.org/law/1392899-client-practice.
“Family Law Essay Example | Topics and Well Written Essays - 4000 Words”, n.d. https://studentshare.org/law/1392899-client-practice.
Comments (0)
Click to create a comment or rate a document

CHECK THESE SAMPLES OF Family Law

In th...
8 Pages(2000 words)Case Study
sponsored ads
Save Your Time for More Important Things
Let us write or edit the essay on your topic "Family Law" with a personal 20% discount.
GRAB THE BEST PAPER

Let us find you another Essay on topic Family Law for FREE!