Comments (0)
Add to wishlistDelete from wishlist
Cite this document
Summary
This case study "The Case of Partnership Law" reveals that the four Windsor University students Sam, Henry, Paul and Allen engaged in a partnership to discover treasure. Partnership deed acts as a legally binding agreement between partners and it is visible evidence of a partnership.
…
Download full paperFile format: .doc, available for editing
HIDE THIS PAPERGRAB THE BEST PAPER93.2% of users find it useful 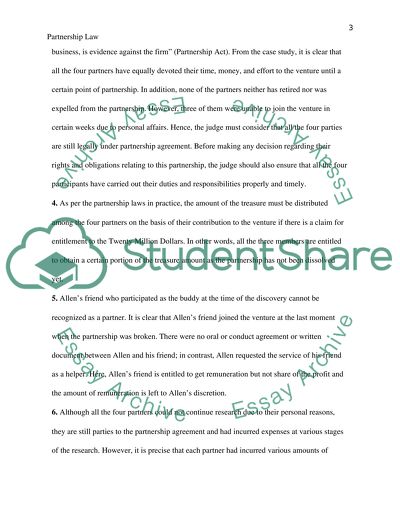 Extract of sample "The of Partnership Law"

The case context clearly indicates that all four participants equally contributed to boat rentals and other associated costs for the treasure search. Hence, evidently, there was a partnership agreement between the four participants. 2. As per the basic provisions of the partnership, there should be at least two members for the formation of a valid partnership. Each member has a contractual obligation to participate in the management and a legal right not to be expelled by other partners. According to Schneeman (2010, p. 69), each partner has the right to get an equal share of the profit, which arises out of the partnership. Partnership law clearly states partners’ rights and obligations incidental to the partnership. In the given case, all four participants have the right to express their opinion about matters connected with the treasure search. Similarly, each participant is entitled to obtain a one-fourth share of the treasure if it is discovered. At the same time, all of them have the legal obligation to bear an equal share of expenses also. 3. According to Canadian Partnership Act Part 2(17), “an admission or representation made by any partner concerning the partnership affairs, if made in the ordinary course of its business, is evidence against the firm” (Partnership Act). From the case study, it is clear that all the four partners have equally devoted their time, money, and effort to the venture until a certain point of partnership. In addition, none of the partners neither has retired nor was expelled from the partnership. However, three of them were unable to join the venture in certain weeks due to personal affairs. Hence, the judge must consider that all the four parties are still legally under the partnership agreement. Before making any decision regarding their rights and obligations relating to this partnership, the judge should also ensure that all the four participants have carried out their duties and responsibilities properly and timely. 4. As per the partnership laws in practice, the amount of the treasure must be distributed among the four partners on the basis of their contribution to the venture if there is a claim for entitlement to the Twenty Million Dollars. In other words, all three members are entitled to obtain a certain portion of the treasure amount as the partnership has not been dissolved yet. 5. Allen’s friend who participated as the buddy at the time of the discovery cannot be recognized as a partner. It is clear that Allen’s friend joined the venture at the last moment when the partnership was broken. There were no oral or conduct agreements or written documents between Allen and his friend; in contrast, Allen requested the service of his friend as a helper. Here, Allen’s friend is entitled to get remuneration but not share of the profit and the amount of remuneration is left to Allen’s discretion. 6. Although all the four partners could not continue research due to their personal reasons, they are still parties to the partnership agreement and had incurred expenses at various stages of the research. However, it is precise that each partner had incurred various amounts of expenses. Read More
Share:
Tags
Cite this document
(“Partnership Law:Case Analysis Case Study Example | Topics and Well Written Essays - 750 words”, n.d.)
Retrieved de https://studentshare.org/law/1392642-case-analysis
(Partnership Law:Case Analysis Case Study Example | Topics and Well Written Essays - 750 Words)
https://studentshare.org/law/1392642-case-analysis.
“Partnership Law:Case Analysis Case Study Example | Topics and Well Written Essays - 750 Words”, n.d. https://studentshare.org/law/1392642-case-analysis.
Comments (0)
Click to create a comment or rate a document

CHECK THESE SAMPLES OF The Case of Partnership Law

In th...
8 Pages(2000 words)Case Study
sponsored ads
Save Your Time for More Important Things
Let us write or edit the case study on your topic "The Case of Partnership Law" with a personal 20% discount.
GRAB THE BEST PAPER

Let us find you another Case Study on topic The Case of Partnership Law for FREE!