Comments (0)
Add to wishlistDelete from wishlist
Cite this document
Summary
Lugi wishes to start a language tuition business but is worried about becoming personally liable for debts incase his business fails. His friend has told him to that he can avoid this if e trades trough a limited company or a limited liability partnership.
…
Download full paperFile format: .doc, available for editing
HIDE THIS PAPERGRAB THE BEST PAPER91.8% of users find it useful 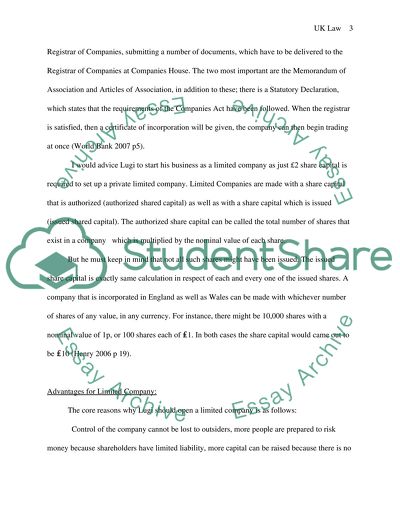 Extract of sample "Law and the Corporation"

Download file to see previous pages There are two types, one, as mentioned above is a Public Limited Company, and the other is a Private Limited Company, which as the name suggests cannot sell its shares to the general public. In the UK, the Companies Act permits several people to form a company for any business that is lawful. Private companies are the easiest kind of company to begin as well as run in their initial stages. Company's name should always end with "Limited" or "Ltd" (Ewan 2004 p 20).
Lugi must keep in mind that this type of company is often a family business; directors of these firms tend to be shareholders and are involved in the running of the organization. Normally the shares of Private Companies can only be transferred to another person if the consent of all the other shareholders is obtained. Private Limited Companies as does a PLC have to apply to the Registrar of Companies, submitting a number of documents, which have to be delivered to the Registrar of Companies at Companies House. The two most important are the Memorandum of Association and Articles of Association, in addition to these; there is a Statutory Declaration, which states that the requirements of the Companies Act have been followed. When the registrar is satisfied, then a certificate of incorporation will be given, the company can then begin trading at once (World Bank 2007 p5).
I would advice Lugi to start his business as a limited company as just 2 share capital is required to set up a private limited company. Limited Companies are made with a share capital that is authorized (authorized shared capital) as well as with a share capital which is issued (issued shared capital). The authorized share capital can be called the total number of shares that exist in a company which is multiplied by the nominal value of each share.
But he must keep in mind that not all such shares might have been issued. The issued share capital is exactly same calculation in respect of each and every one of the issued shares. A company that is incorporated in England as well as Wales can be made with whichever number of shares of any value, in any currency. For instance, there might be 10,000 shares with a nominal value of 1p, or 100 shares each of 1. In both cases the share capital would came out to be 10 (Henry 2006 p 19).
Advantages for Limited Company:
The core reasons why Lugi should open a limited company is as follows:
Control of the company cannot be lost to outsiders, more people are prepared to risk money because shareholders have limited liability, more capital can be raised because there is no limit to the number of shareholders and, the company is a separate legal entity and therefore, as such has a continuous legal existence, separate from the individuals who are its shareholders. Its existence is unaffected by changes in the directors and other shareholders, and the work of the business can thus carry on with a minimum of interruption (contrast this with the death of a sole proprietor) (Stephen 2000 p 10).
Disadvantages
Like every business even limited business has risks, Lugi must be fully prepared to manage those risks and disadvantages. They are as follows:
shared profits among a larger amount of people, the legal procedure to set up the business, as a consequence of this there is a cost in ...Download file to see next pagesRead More
Share:
Tags
Cite this document
(“Law and the Corporation Case Study Example | Topics and Well Written Essays - 2000 words”, n.d.)
Law and the Corporation Case Study Example | Topics and Well Written Essays - 2000 words. Retrieved from https://studentshare.org/miscellaneous/1533670-law-and-the-corporation

CHECK THESE SAMPLES OF Law and the Corporation

...? The Corporation Law Case Scenario The formulation of corporation law aimed at helping the directors understand as well as comply with their duties in an effort to prevent the insolvent trading (Bosen 2009, p.94). The law sets out key principles that require consideration in compliance of directors with their duties. According to the law, the step towards prevention of insolvency by a director depends on the size of the company, business complexity and expertise of the management staff. In the case scenario, Emma directly oversees the financial situation of the company and receives advice from the directors. In her role as accountant, Emma should ensure that the employees, management and the external advisers possess the required skills...
6 Pages(1500 words)Essay

Some of the more important rights bestowed upon employees by the employment law are the right to claim wrongful or unfair dismissal and payment for redundancy. Other legislation, such as the health and safety statute and the insolve...
7 Pages(1750 words)Case Study
sponsored ads
Save Your Time for More Important Things
Let us write or edit the case study on your topic "Law and the Corporation" with a personal 20% discount.
GRAB THE BEST PAPER

Let us find you another Case Study on topic Law and the Corporation for FREE!