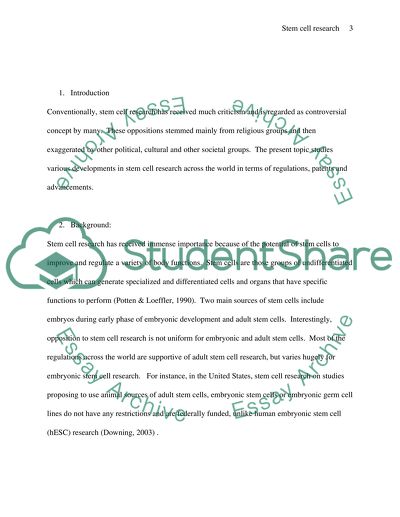 Extract of sample "Emergence and Development of Stem Cell"

Download file to see previous pages Two main sources of stem cells include embryos during the early phase of embryonic development and adult stem cells. Interestingly, opposition to stem cell research is not uniform for embryonic and adult stem cells. Most of the regulations across the world are supportive of adult stem cell research but varies hugely for embryonic stem cell research. For instance, in the United States, stem cell research on studies proposing to use animal sources of adult stem cells, embryonic stem cells or embryonic germ cell lines do not have any restrictions and are federally funded, unlike human embryonic stem cell (hESC) research (Downing, 2003). 3.1. Emergence and development of stem cell research: In the US, many Christian groups protested President Bush’s initial decision regarding research on human embryonic stem cells, which resulted in forbidding further research on research. Though this consoled the priests and other religious figures in the US, this decision also received much opposition from other religious groups within the US and other parts of the world. Although religious groups expressed satisfaction over the President’s decision to withdraw support for research on hESCs, they also detested manipulation of existing stem cells for research purposes (Petersen, 2003). Research ethics concerned with ESCs are mostly about the method of deriving healthy human embryos and their moral status during early stages that carry different views in different religions (McLaren 2007). These differences have been the reasons for most of the ethical debate about ESC research. 3.2. Restrictions and limitations on stem cell research: After President Bush passed the bill on hESC research in 2001, funding restrictions were also imposed on this aspect as part of his campaign promise made to the citizens of the US that their money would not be used for stem cell research purposes (Stolberg, 2001). As a reaction to this, states like California, Connecticut, Illinois, Iowa, Maryland, Massachusetts, New Jersey and New York enacted independent funding systems (Frost & Sullivan, 2008). Regulations imposed on hESCs and adult stem cells are different in different countries. The policies on hESC research in the United States are more liberal, like that of Germany, Spain, France, and Canada; but the policies in the United Kingdom, China, Japan, and Israel are even more liberal than that of the United States (Herring, 2006). Evidence of the amount of research indicates that adult stem cell trials have been more successful in most of the countries that encourage and support stem cell research. Outcomes of these researchers on adult stem cells have been applied to treat many diseases, birth defects, cancers, severe heart-related issues etc (Herring, 2006). This evidence only indicates the extent of advancement in adult stem cell research and application in various countries across the world. ...Download file to see next pages Read More
Share:
Tags
Cite this document
(“Emergence and Development of Stem Cell Research Paper”, n.d.)
Retrieved de https://studentshare.org/law/1391666-stem-cell-research

“Emergence and Development of Stem Cell Research Paper”, n.d. https://studentshare.org/law/1391666-stem-cell-research.
Comments (0)
Click to create a comment or rate a document

CHECK THESE SAMPLES OF Emergence and Development of Stem Cell Research

CF&F has been undertaking a revamp of its entire management set-up to bring back its competitive advantage in the market place. It has changed the top and middle managers by inducting experienced talent from the industry. Internal promotions have been stopped and, even at the supervisory level, fresh engineering graduates have been recruited to boost production and lower costs.

As a result of these changes, the Frontline Supervisors and the regular hourly wage workers are feeling unsecured about their future. The supervisors’ grouse is that the middle management is not interested in decision making and this leaves them vulnerable to the indifference shown by middle managers in their technical and managerial fu...
7 Pages (1750 words) Case Study

1. Attract an effective workforce. This includes planning on the number of employees required, job analysis or what types of jobs should be conducted or jobs associated with the types of business, forecasting future recruitment, recruiting because good employees need to be recruited, and selecting.
As stated by Daft an...
9 Pages (2250 words) Case Study

Despite the fact that longitudinal studies have proven that human aggression is to some extent an unwavering trait, it is undeniable that the environment plays a big role in influence the aforementioned behavior (Slaby & Roedell, 1982). Our daily encounter with the environment is a form of socialization that is defined as the process of integrating within oneself a sense of connection to a larger social world by means of discovering, understanding and adopting the beliefs, values, and norms of culture of other people. To a certain extent, sociologists consider the mass media as a powerful socializing agent as its significance is not constrained to the content alone of the media messages. Instead, it affects how we learn a...
10 Pages (2500 words) Report

The article contains a detailed evaluation of the novel by Soueif which can be categorized as the strength of the re...
6 Pages (1500 words) Assignment
sponsored ads
Save Your Time for More Important Things
Let us write or edit the research paper on your topic "Emergence and Development of Stem Cell Research" with a personal 20% discount.
GRAB THE BEST PAPER

Let us find you another Research Paper on topic Emergence and Development of Stem Cell Research for FREE!