Comments (1)
Add to wishlist Delete from wishlist
Cite this document
Summary
According to the English Criminal Law, it is a punishable offence for a person to cause damage to property. The Criminal Damage Act 1971 provides for guidelines that would show that a person committed an offence related to property damage. This act defines property as anything that is tangible regardless of whether it is real or personal…
Download full paper File format: .doc, available for editing
HIDE THIS PAPERGRAB THE BEST PAPER97.4% of users find it useful 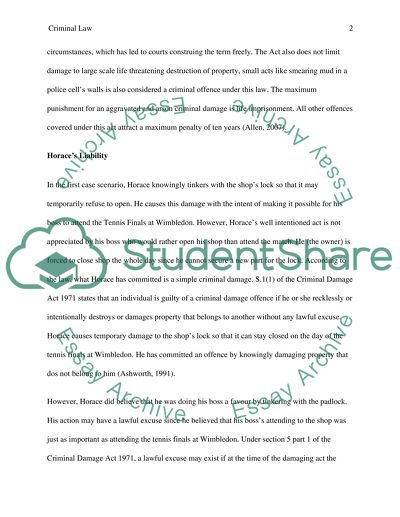 ca
camilareichert added comment 1 year ago
Student rated this paper as
I had an issue with a essay types of works. All until I came across this website and this particular essay. Even though "Criminal Law (Damage to Property)" is far from my studies, the structure is so great that I use it all the time as an example for my own works.

CHECK THESE SAMPLES OF Criminal Law (Damage to Property)

They are on trial and will be dealt with fairly. These laws ensure that no one, even if he or she has committed a crime is abused or punished cruelly.
Following the history of civilization like in china, we see the traces of systems for Criminal justice in order to provide safety for the citizens. Evolving through the years laws have been modified and changed to form the system that we know today.
From its start, the “U.S. criminal justice system” has advocated the idea of “checks and balances”. To avoid dictatorial rule, the people who founded this system in such a way that one person was not given control or authority completely to punish the criminals. The idea of assigning a ‘jury...
6 Pages (1500 words) Assignment
sponsored ads
Save Your Time for More Important Things
Let us write or edit the essay on your topic "Criminal Law (Damage to Property)" with a personal 20% discount.
GRAB THE BEST PAPER

Let us find you another Essay on topic Criminal Law (Damage to Property) for FREE!