Comments (0)
Add to wishlistDelete from wishlist
Cite this document
Summary
This research essay will be analysing the concept of equitable jurisdiction which permits a court to turn down an intentional disposal of assets where an executor demonstrates that the disposition of property was under the mistake of facts. Also it will be analysing the court’s equitable jurisdiction in reversing a gift made already under the mistake of facts…
Download full paperFile format: .doc, available for editing
HIDE THIS PAPERGRAB THE BEST PAPER94.1% of users find it useful 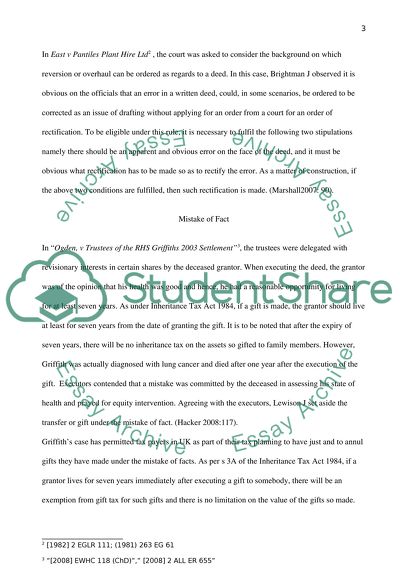 Download file to see previous pages Since the medieval period, the equity principles in UK have emerged poignantly through the process of chains of various forms of the writ, conceived by the Lords Chancellor. UK courts have applied equitable jurisdiction through the forms of rescission, injunctions, specific performance and through rectification or reversion. An equitable remedy can be explained as a relief or remedy by recognising a loss suffered by an infringement of duty and demanding the fiduciary to make an order for compensation for the loss suffered as held in Target Holdings v Redferns. The court can order to pay monetary damages which are known as “equitable compensation.” The fundamental principle of the equitable jurisdiction is the concept that it functions or acts in personam. The meaning of in personam can be explained how the Court of Equity is more worried to stop any given individual from functioning unconscionably. Thus, a Court of Equity is therefore giving a verdict, footed on the veracity of the facts unreasonably or not knowingly. If the defendant does not stop or carryout the court orders, then such person would be held as committed a contempt of court.
In East v Pantiles Plant Hire Ltd , the court was asked to consider the background on which reversion or overhaul can be ordered as regards to a deed. In this case, Brightman J observed it is obvious on the officials that an error in a written deed, could, in some scenarios, be ordered to be corrected as an issue of drafting without applying for an order from a court for an order of rectification. To be eligible under this rule, it is necessary to fulfil the following two stipulations namely there should be an apparent and obvious error on the face of the deed, and it must be obvious what rectification has to be made so as to rectify the error. As a matter of construction, if the above two conditions are fulfilled, then such rectification is made. (Marshall2007: 90). Mistake of Fact In “Ogden, v Trustees of the RHS Griffiths 2003 Settlement”3, the trustees were delegated with revisionary interests in certain shares by the deceased grantor. When executing the deed, the grantor was of the opinion that his health was good and hence, he had a reasonable opportunity for living for at least seven years. As under Inheritance Tax Act 1984, if a gift is made, the grantor should live at least for seven years from the date of granting the gift. It is to be noted that after the expiry of seven years, there will be no inheritance tax on the assets so gifted to family members. However, Griffith was actually diagnosed with lung cancer and died after one year after the execution of the gift. Executors contended that a mistake was committed by the deceased in assessing his state of health and prayed for equity intervention. Agreeing with the executors, Lewison J set aside the transfer or gift under the mistake of fact. (Hacker 2008:117). Griffith’s case has permitted tax payers in UK as part of their tax planning to have just and to annul gifts they have made under the mistake of facts. As per s 3A of the Inheritance Tax Act 1984, if a grantor lives for seven years immediately after executing a gift to somebody, there ...Download file to see next pagesRead More
Share:
Tags
Cite this document
(“UK's Court's Equitable Jurisdiction in Inheritance Tax Matters Essay”, n.d.)
Retrieved de https://studentshare.org/law/1390718-land-law

The term clinical governance gained importance following the high mortality rate for pediatric cardiac surgery at the Bristol Royal Infirmary. The incident led to the formation by the government in 1998 of the Kennedy Commission, which proved a turning point in overhauling the NHS (Kennedy, 2001). The commission’s final report recommended that change “can only be brought about with the willing...
11 Pages(2750 words)Term Paper
sponsored ads
Save Your Time for More Important Things
Let us write or edit the essay on your topic "UK's Court's Equitable Jurisdiction in Inheritance Tax Matters" with a personal 20% discount.
GRAB THE BEST PAPER

Let us find you another Essay on topic UK's Court's Equitable Jurisdiction in Inheritance Tax Matters for FREE!