Comments (0)
Add to wishlistDelete from wishlist
Cite this document
Summary
Most of us are aware that our copies of Windows or Linux need to be periodically updated with the latest patches.  How often do you do YOUR updates?  One is made aware that there are options provided by Microsoft, for instance, in selecting an automatic updating option where…
Download full paperFile format: .doc, available for editing
HIDE THIS PAPERGRAB THE BEST PAPER92.9% of users find it useful 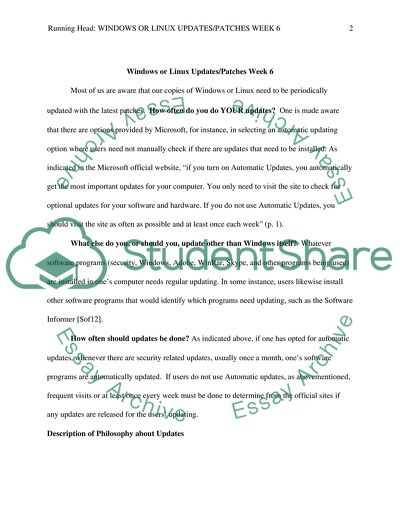 Windows or Linux Up s/Patches Week 6 Windows or Linux Up s/Patches Week 6 Most of us are aware that our copies of Windows or Linux need to be periodically updated with the latest patches.  How often do you do YOUR updates?  One is made aware that there are options provided by Microsoft, for instance, in selecting an automatic updating option where users need not manually check if there are updates that need to be installed. As indicated in the Microsoft official website, “if you turn on Automatic Updates, you automatically get the most important updates for your computer. You only need to visit the site to check for optional updates for your software and hardware. If you do not use Automatic Updates, you should visit the site as often as possible and at least once each week” (p. 1).
What else do you, or should you, update other than Windows itself?  Whatever software programs (security, Windows, Adobe, WinRar, Skype, and other programs being used) are installed in one’s computer needs regular updating. In some instance, users likewise install other software programs that would identify which programs need updating, such as the Software Informer (Sofware Informer, 2012).
How often should updates be done? As indicated above, if one has opted for automatic updates, whenever there are security related updates, usually once a month, one’s software programs are automatically updated. If users do not use Automatic updates, as abovementioned, frequent visits or at least once every week must be done to determine from the official sites if any updates are released for the users’ updating.
Description of Philosophy about Updates
In the article published by the Information Technology of the Columbia University Medical Center (ITCUMC) entitled “Operating System and Software Updates”, updates or patches are crucial to ensure security in one’s personal or professional system and to retain maximum functionality, as required.
1. What to update: One needs to update both the operating system and various software
programs installed. As advised, “software programs such as Word, Excel, Adobe Reader and Acrobat, Firefox, Internet Explorer, and Symantec can also require updates and patches from time to time. Since the OS or software program has to contact its parent company, your computer must be online to get new information about updates” ( ITCUMC, 2011, par. 2).
2. When to update: Updating is generally done once a month except for instances when “a
security threat occurs, such as a widespread virus or worm that affects Windows-based computers, Microsoft will release a corresponding update as soon as possible. Other types of updates can be released whenever they are ready. It’s a good idea to turn on Automatic Updates so that your computer can receive high-priority updates as they become available” (Microsoft Corporation, 2012, p. 1). Likewise, one’s research reveals that “Microsoft releases most of its updates and patches on the second Tuesday of every month. If your Windows Update feature is turned on you should receive these automatically” (ITCUMC, 2011, par. 9).
3. Who should update company computers: For company computers, there are people
from the Information Technology Department composed of qualified and competent technical staff to monitor and update the needed programs. Otherwise, by turning on Automatic Updates, company computers would receive the needed improvements and security details when they come due.
If I am a business owner, I would maintain a qualified technical staff to address software and hardware requirements or be personally apprised of all needed updating and patching details.
References
Information Technology: Columbia University Medical Center (ITCUMC) (2011, December 19). Operating System and Software Updates. Retrieved April 26, 2012, from cumc.columbia.edu: http://www.cumc.columbia.edu/it/getting_started/updates.html
Microsoft Corporation. (2012). Fast Facts About Microsoft Update. Retrieved April 26, 2012, from microsoft.com: http://www.microsoft.com/canada/smallbiz/issues/sgcv2/security-guidance-centre/fastfactsaboutmicrosoftupdate.mspx
Sofware Informer. (2012). Home Page. Retrieved April 26, 2012, from software.informer.com: http://software.informer.com/ Read More
Share:
Tags
Cite this document
(“Window and linux updates/patches Wk 6 Essay Example | Topics and Well Written Essays - 500 words”, n.d.)
Window and linux updates/patches Wk 6 Essay Example | Topics and Well Written Essays - 500 words. Retrieved from https://studentshare.org/information-technology/1595157-window-and-linux-updatespatches-wk-6

CHECK THESE SAMPLES OF Window and linux updates/patches Wk 6

...? Nursing This paper seeks to delve into the role of nurse to patient ratios in regard to ventilator-associated pneumonia (VAP). This has been found to be one of the most prevalent respiratory problems across the world. To improve the health care sector, it should be noted that the level of involvement of the healthcare officers be improved to ensure that patients’ problems are given utmost attention (Marrie, 2001). The best remedial measure to mitigate the rate of spread of this infection is through improved knowledge gain on the side of nurses and preventative awareness campaign on the side of the people. Enhanced knowledge of evidence based recommendations in prevention of VAP and a multifaceted implementation of care tools... Nursing This ...
3 Pages(750 words)Article

...and ease of use are major factors for its popularity. CentOS do not require different license for each machine as compared to Microsoft Windows products. Once loaded on disk, then can be installed on as many servers or workstation as the user required, allows greater compatibility between both without any major performance issues. Online blogs, forums and websites are general support for CentOS. Feedbacks around globe shows that people using CentOS as workstation or server had never faced any serious issue. Several people who have used this distribution reported that no serious issue has been faced in both of its form i.e. workstation and server. Novell Novell is a known Linux leader; its distribution is...
4 Pages(1000 words)Assignment

...History Psychology Week 6 Assignment According to DeMar (1989) the four major assumptions that underly behaviorism have to do with four different issues. Behaviorism is naturalistic which means it can be explained by natural laws. This essentially meant that man had no soul or mind but he did have a brain that responded to stimuli in his environment. The second assumption is that man is basically a machine that responds to a set pattern of conditioning. This means that people have no ability to act other than what they have been conditioned to do. Assumption three states that man is not responsible for his actions because he is reacting to the outside stimuli. In other words, like a computer, the individual assumes...
3 Pages(750 words)Essay

... to synchronize updates with computer systems (Hart-Davis, 2007). As a safe practice, I have automatic update turned on. There are many reasons why tuning on automatic updates are important to me. Using such a feature, I am always securing my computer knowing what my computer is well secure from works, but also from viruses and malware. There are some of the benefits that motivate me to use automatic update. Referees Hart-Davis, G. ( 2007) Mastering Microsoft Windows Vista home: premium and basic. New Jersey: John Wiley and Sons. References... Software Up s s of Learning Software up s Computer security is essential for any computer users, and despite the challenges of keeping oneself up to date, operating systems have an automatic...
1 Pages(250 words)Essay

...My Spell Checker Poem Topic 3 Week 6 My Spell Checker Poem Topic 3 Week 6 The poem en d “My Spell Checker” proffered pertinent issues relative to overreliance to word programs’ checking of spelling application. As disclosed, some words might be spelled correctly but used in the wrong way. The purpose of this essay, therefore, is to present a personal evaluation of the poem and the reason why this poem would be important to a student who relies heavily on spell check thinking it will catch every mistake. An initial reading of the poem to someone who have been consistently exposed to literary works would reveal that the following words, though existing in the English dictionary, were not used in the...
2 Pages(500 words)Essay

...Sustainability 351 Week 6 Forum Submitted by: XXXXXXXX Number: XXXXXXX XXXXXXXX XX – XX – of XXXXXXXX WalMart’s goal of “Be packaging neutral globally by 2025”, simply implies that the company aims at, using all the available packaging and recycling them and reuse the packaging to be recycled into renewable contents. The focus of the company is to try to reduce the consumption of water as well as trees in the development of the cardboard boxes. The focus of the company is to reduce the cardboard boxes reaching the landfill wastes (Thomas, 2010). The focus has been on reducing the overall wastes and to reduce the energy consumption and to build using what is already been used. The company has been extremely careful to ensure... 351 Week 6...
1 Pages(250 words)Research Paper

...Professional Development al Affiliation Part I: Professional Goals Profesional Introduction My major professional goal is toadvance my career as a Graduate Human Services professional. With a constantly changing world, the societal needs of the populations are also changing. Taking up a graduate course in human services offers me an opportunity to gain knowledge and practices that are up to date in my field. In addition, taking up online classes is great because the lessons are only designated for particular days in a week and this means that I do not have to overwork myself with intensive weekend sessions. This leaves more time for personal life and personal study (University of Washington Professional and Continuing Education... Development...
9 Pages(2250 words)Essay

...Computer Sciences and Information Technology Microsoft Up s al Affiliation) According to Callahan, there are a number of recommendations that when used, can optimize the installation of Windows 8 Professional. They include for instance, the use of the Clean Up registry option in order to keep frequent maintenance of one’s registry, through the free registry cleaner. This option will ensure the registry records are free of errors. Other recommendations are, keeping personal computers on sleep mode, managing power settings, using the Ready Boost option to increase the memory of the computer and elevating CPU Priority (Callahan, 2011). Windows 7 has a variety of tools that can be applied in order to upgrade...
1 Pages(250 words)Essay

...but not found in Window Operating system. The MFT, indirect node file, and inode are similar in that they store file’s properties and allow easy retrieval of the files. The NTFS and Mac OS inode structure are more superior to the Linux one, and thus they improve performance and efficiency. Linux adoption both by desktop users and server users has been in upward trend recently. The main reasons for this trend can be attributed to the low cost of acquiring the operating system, better system stability, better virus and malware protection and free software licensing. Moreover, most Linux distribution has multiple desktop workspaces, is easy to customize, have...
1 Pages(250 words)Article
sponsored ads
Save Your Time for More Important Things
Let us write or edit the essay on your topic "Window and linux updates/patches Wk 6" with a personal 20% discount.
GRAB THE BEST PAPER

Let us find you another Essay on topic Window and linux updates/patches Wk 6 for FREE!