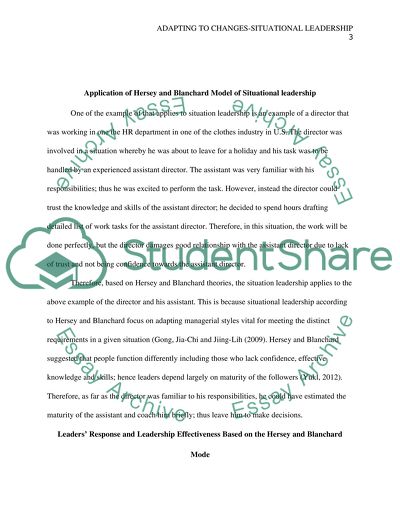 Extract of sample "Adapting to Changes and Situational Leadership"

﻿Adapting to Changes-Situational Leadership
Introduction
Fernandez, S., Cho, Y., & Perry, J. L. (2010). Exploring the link between integrated leadership and public sector performance. Leadership Quarterly, 21(2), 308-323, is the article that offers an integrated leadership concept employed in the public sectors. This concept combines five leadership roles employed by the HR managers and employees across the organization level. The authors offer an empirical analysis that reveal the way leadership creates a positive and sizeable effect on the performance in the public sector (Fernandez, Cho and Perry (2010). The researcher further delivered some of the insinuations, findings and study limitations of integrated leadership roles in the public subdivision.
Strengths and Limitations of Situational Leadership
One of the strengths presented in the article is increased morale due to better communication whereby the leader needs to constantly remain aware of the needs of his followers. Pauliene (2012) argues that’s successful leaders should examine the ability of employees and communicate effectively. This can enable the leaders to lead the followers successfully; hence enabling them to perform their task effectively. Secondly, situational leaders should develop a positive and sizeable effect on the performance level of the federal agencies; hence achieving success (Fernandez, Cho and Perry, 2010). However, situation leadership creates confusion; thus it is likely to impact the work performance. Lastly, leaders might lose credibility and trustworthiness by their followers; hence poor work performance in the public sectors.
Application of Hersey and Blanchard Model of Situational leadership
One of the example of that applies to situation leadership is an example of a director that was working in one the HR department in one of the clothes industry in U.S. The director was involved in a situation whereby he was about to leave for a holiday and his task was to be handled by an experienced assistant director. The assistant was very familiar with his responsibilities; thus he was excited to perform the task. However, instead the director could trust the knowledge and skills of the assistant director; he decided to spend hours drafting detailed list of work tasks for the assistant director. Therefore, in this situation, the work will be done perfectly, but the director damages good relationship with the assistant director due to lack of trust and not being confidence towards the assistant director.
Therefore, based on Hersey and Blanchard theories, the situation leadership applies to the above example of the director and his assistant. This is because situational leadership according to Hersey and Blanchard focus on adapting managerial styles vital for meeting the distinct requirements in a given situation (Gong, Jia-Chi and Jiing-Lih (2009). Hersey and Blanchard suggested that people function differently including those who lack confidence, effective knowledge and skills; hence leaders depend largely on maturity of the followers (Yukl, 2012). Therefore, as far as the director was familiar to his responsibilities, he could have estimated the maturity of the assistant and coach him briefly; thus leave him to make decisions.
Leaders’ Response and Leadership Effectiveness Based on the Hersey and Blanchard Mode
Leadership should adopt varied leadership theories which best suits the situations they encounter. This is because leadership competence that may work effectively in one given situation may fail to work well in another situation. In other words, situation varies; thus leaders should adopt varied leadership styles that fit effectively a particular working environment. The Hersey and Blanchard model is built upon the concept of adulthood of the followers, as the main aspect that impact management roles. Thus, Hersey and Blanchard model demands that the followers should have the ability and confidence to perform task in a given situation; thus leaders should be aware of such to avoid conflicts.
References
Gong, Y., Jia-Chi H., and Jiing-Lih F. (2009). "Employee Learning Orientation,
Transformational Leadership, And Employee Creativity: The Mediating Role Of Employee Creative Self-Efficacy." Academy Of Management Journal 52, no. 4: 765-778.
Fernandez, S., Cho, Y., & Perry, J. L. (2010). Exploring the link between integrated leadership
and public sector performance. Leadership Quarterly, 21(2), 308-323.
Pauliene, R. (2012). Transforming Leadership Styles And Knowledge Sharing In A Multicultural
Context. Business Management & Education, 10(1), 91-109. doi:10.3846/bme.2012.08
Yukl, G. (2012). Effective Leadership Behavior: What We Know and What Questions Need
More Attention. Academy Of Management Perspectives, 26(4), 66-85. doi:10.5465/amp.2012.0088 Read More
Share:
Tags
Cite this document
(“Adapting to Changes and Situational Leadership Assignment”, n.d.)
Adapting to Changes and Situational Leadership Assignment. Retrieved from https://studentshare.org/human-resources/1620735-adapting-to-changes-situational-leadership

“Adapting to Changes and Situational Leadership Assignment”, n.d. https://studentshare.org/human-resources/1620735-adapting-to-changes-situational-leadership.
Comments (0)
Click to create a comment or rate a document

CHECK THESE SAMPLES OF Adapting to Changes and Situational Leadership

...? Adapting to Health Changes This essay aims to address a two-fold objective, to wit to detail, prioritize, identify rationale for each assessments and plan of care, and 2) to critically analyze the attitudes and beliefs of nurses towards elderly and how these influence the practice of other health care professionals. It also includes the topics related to elder abuse. Introduction The most difficult challenge a nurse could face is caring for an elderly ill client (Alexander, 2004, p. 1005). Due to developmental changes in physical and mental state, some of the clinical manifestations of certain diseases are hard to detect. One of these diseases is the diabetic ketoacidosis. Emergencies related to endocrine diseases account... of the...
9 Pages(2250 words)Assignment

...Introduction Several definitions have been brought forward by different scholars to explain what situational leadership is all about. In this discussion, we will refer to Paul Hersey and Kenneth Blanchard’s definition which states; it is the willingness and ability of a follower to do a task. They also state that in a leadership setting, the leaders should adjust their behavior to suit maturity level of their followers. They had their illustrated their four levels of maturity in what they came up with as a situational leadership model. They referred to it as Hersey-Blanchard model. The Hersey-Blanchard situational...
2 Pages(500 words)Assignment

...Adapting to Changes–Situational Leadership Back in 1969, Kenneth Blanchard and Paul Hersey made an introduction to the situational leadership approach. In a drastic departure from the previous theories, this theory encompasses the adaptation of managerial styles in quest to meeting certain diverse requirements of any situation (Fernandez, Cho & Perry, 2010). Blanchard and Hersey’s approach demonstrate that people often function at four different levels of maturity. The model presents four distinct leadership styles that include selling, telling, participating and delegating (Carew, Carew & Blanchard, 2008). The situational model comes with a number of strengths and limitations as described below. Strengths Personalized management... of the...
2 Pages(500 words)Assignment

...How Situational Approach can be used in organization. Situational Leadership approach was created by Professor and Dr. Paul Hersey and Author Ken Blanchard in 1969. It is defined as business leadership theory that promotes the benefit of combining a range of managerial styles to cater for different people within the same organization. Unlike, the traditional view of executive manager who employs the same leadership tactics across the entire organization, more than likely passing directives down through subordinates and other intermediaries ( Hersey and Blanchard,1969). Situational leadership Approach employs strategies...
2 Pages(500 words)Research Paper

...﻿The Situational Leadership Introduction Large numbers of organizations have adopted frameworks such as Herzberg’s Motivation and Hygiene Factors, which can assist an organization to motivate employees and to enhance the level of job satisfaction amid them that in turn increases their level of productivity as well as ensures organizational sustainability in the long-term (Graeff, 1997). In this paper, the objective is to highlight the strengths of ‘situational leadership’ along with the concept of Herzberg’s Motivation theory and Hygiene Factors to highlight upon the effectiveness of combining these frameworks when practicing leadership in an emergency services sector. Moreover, the study will also try to identify the reliability... and...
5 Pages(1250 words)Admission/Application Essay

Adapting to Workplace Changes in Professionalism

...Adapting to work place changes in professionalism Introduction Understanding and defining the elements of a group culture are very relevant to establishing a professional identity in person or online. The features are useful as they show how professionals interact whether in person or online. A workplace culture consists of different statuses, roles, and occupations. It is imperative to create communication networks among individuals in the work place. Communication is the main thing that attaches the employees together and enables them to work as a group. For example in an institution, a manager has to speak in a certain language like English for his or her juniors to understand. Also in staff meetings,...
5 Pages(1250 words)Essay

Adapting to Workplace Changes in Professionalism

...ADAPTING TO WORKPLACE CHANGES IN PROFESSIONALISM Legal Cultural Group A cultural group can be described a group of people who ascribe to one or several unique attributes. For purpose of this paper, legal culture will be analyzed and how professionals of this cultural group provide insights into the understanding of this cultural group. The traditional literature suggests that people are said to belong to a specific single cultural group and such groups should be mutually exclusive, homogenous and static. However, this focus on cultural group has been labeled as ‘residual approach to culture’ according to Tayeb, (1994, p. 432). This is because the meaning of culture is said to represent different ethnic,...
5 Pages(1250 words)Essay
sponsored ads
Save Your Time for More Important Things
Let us write or edit the assignment on your topic "Adapting to Changes and Situational Leadership" with a personal 20% discount.
GRAB THE BEST PAPER

Let us find you another Assignment on topic Adapting to Changes and Situational Leadership for FREE!