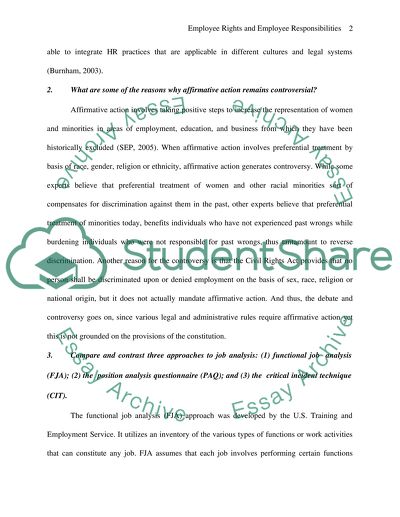 Download file to see previous pages Human Resource Management (HRM) Departments face six challenges.First,HRM must plan for organizations,jobs,and people. An organization's top management works with HR managers to seamlessly link resources to organizational strategies and objectives. A company's human resources is a vital, if not the most vital component of the organization, and this human resource pool must function in a way aligned to the organization's goals. Second, HRM must be able to get the required human resources into the organization. New employees need to be recruited, positions must be filled either through new recruits or by transferring or promotion from within the organization. In performing this function, the company through HRM must comply with employment laws, such as the equal opportunity law. Third, HRM should build employee performance. Employees must be trained either formally or informally on methods. They must be motivated to improve their performances through total quality management programs, self-management programs and other programs that enhance the quality of work. Fourth, HRM should reward employees for good performance. Employee appraisal systems should be developed and monitored. Fair and effective ways to reward good performance should be developed and implemented. Direct and indirect compensation programs must be put in place to form part of rewards. Fifth, HRM should oversee its human resources with health and safety programs, good employee relations, participation in collective bargaining with unionized employees, and control employee turnover such that valued employees are kept in the payroll. And sixth, HRM must manage resources at the multi-national or multicultural level. With increasing diversity in the workplace coupled with the globalization of businesses, HRM must be able to integrate HR practices that are applicable in different cultures and legal systems (Burnham, 2003).
2. What are some of the reasons why affirmative action remains controversial
Affirmative action involves taking positive steps to increase the representation of women and minorities in areas of employment, education, and business from which they have been historically excluded (SEP, 2005). When affirmative action involves preferential treatment by basis of race, gender, religion or ethnicity, affirmative action generates controversy. While some experts believe that preferential treatment of women and other racial minorities sort of compensates for discrimination against them in the past, other experts believe that preferential treatment of minorities today, benefits individuals who have not experienced past wrongs while burdening individuals who were not responsible for past wrongs, thus tantamount to reverse discrimination. Another reason for the controversy is that the Civil Rights Act provides that no person shall be discriminated upon or denied employment on the basis of sex, race, religion or national origin, but it does not actually mandate affirmative action. And thus, the debate and controversy goes on, since various legal and administrative rules require affirmative action yet this is not grounded on the provisions of the constitution.
3. Compare and contrast three approaches to job analysis: (1) functional job analysis (FJA); (2) the position analysis questionnaire (PAQ); and (3) the critical incident technique (CIT).
The functional job analysis (FJA) approach was developed by the U.S. Training and Employment Service. It utilizes an inventory of the various types of functions or work activities that can constitute any job. FJA assumes that each job involves performing certain functions related to data, people and things. The three categories are subdivided to form worker-function scales. The position analysis questionnaire approach (PAQ) is a quantifiable data collection method covering 194 different worker-oriented tasks. Using a five-point scale, the PAQ seeks to determine the degree, if any, to which the different ...Download file to see next pagesRead More
Share:
Tags
Cite this document
(“Employee rights and employee responsibilities Essay”, n.d.)
Retrieved from https://studentshare.org/human-resources/1519575-employee-rights-and-employee-responsibilities

CHECK THESE SAMPLES OF Employee rights and employee responsibilities

This work arrived at conclusions, by establishing the binding nature of the UDHR on the member states. The UDHR was rendered binding...
8 Pages(2000 words)Case Study

... about their output. They should also be allowed to be responsible in certain tasks in which they specialize depending on their comfort zones. The global labour market dynamics largely affect employee retention in multinational organizations. The labour market is liberalized and employees can obtain work permits to work in a wide range of companies globally. Movement from one employer to the other is therefore common in the contemporary multinational organizations. High employee turn over is detrimental to an organization’s productivity and reputation. It is usually costly to hire and train new employees to become competent in the workplace. The organization looses skilled employees to competitors, and more so, skills attained...
8 Pages(2000 words)Essay
sponsored ads
Save Your Time for More Important Things
Let us write or edit the essay on your topic "Employee rights and employee responsibilities" with a personal 20% discount.
GRAB THE BEST PAPER

Let us find you another Essay on topic Employee rights and employee responsibilities for FREE!