Comments (0)
Add to wishlistDelete from wishlist
Cite this document
Summary
In the 16th Century, Slavery was rampant, and slaves were sourced from African Kingdoms of West Africa and taken to the United States to work in the Spanish and Portuguese farms. Slaves were denied their rights and handled like animals. The Ships that arrived in the United…
Download full paperFile format: .doc, available for editing
HIDE THIS PAPERGRAB THE BEST PAPER97.7% of users find it useful 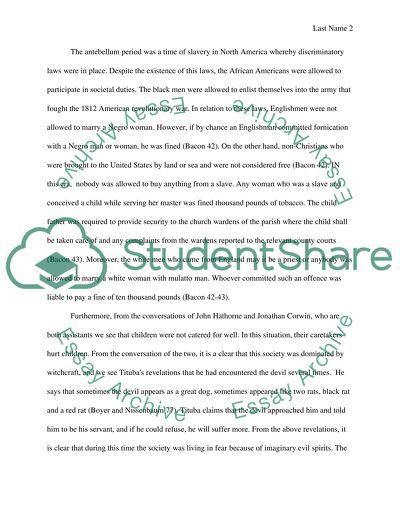 “The African American Experience in Colonial and Antebellum North Term Paper”, n.d. https://studentshare.org/history/1662496-the-african-american-experience-in-colonial-and-antebellum-north-america.
Comments (0)
Click to create a comment or rate a document

...African American History Assessing the antebellum slavery Ante means before and bellum means war. It had different categories of slaves working as urban and domestic skilled, rural and agriculture, others living in homes owned by slave holders as well as those who worked in plantations. This slavery is viewed as the highest degree of aristocracy. The aristocrats were very wealthy and owned vast pieces of land which were developed by the slaves. One factor that had an effect on slave institution was need for labor to work in the white farms. Slave trade was viewed by slave masters as necessary evil because there was sparse population and therefore they needed labor to work in their farms....
8 Pages(2000 words)Essay

...) the governor, appointed by the Crown or by the proprietor, or proprietors, (2) the council, also appointed by the Crown, and (3) the assembly or house of representatives, elected by the people (Taylor, 2003). Like the Greek city-states, colonies were first controlled by ancient European rulers, which later made way to more democratic forms of government. According to Roman judicial and legislative systems, the judiciary and Senate were also established in America. Thus implementation of these systems required administrative control. Conclusion - These instances suggest the tremendous influence of ancient Roman and Greek governmental systems and their implementation on the development of...
2 Pages(500 words)Essay

..., but yet they have neglected to give due credit to them or even acknowledge them. This is mutual where Europeans and Indians are concerned. Before slavery was abolished, agriculture was the predominant occupation during the colonial period. Blacks as well as American Indian slaves were utilized to grow crops such as flax, apples and onions. They were also used in the production of dairy products, fish and whale oil which were very important commercial products and hence trade and commerce flourished to a great extent. Migrants from different parts of the world came either voluntarily or involuntarily in search of greener pastures to America and were a sort of intrusion to the already highly developed and sophisticated societies... ...
2 Pages(500 words)Essay

...North America It is impossible for people living today to truly understand what North America looked like during the age of discovery. While we can gain some understanding by exploring the limited remaining wild places and studying some of the history of geographical regions and historical events, it must always be remembered that history is often told through the eye of the victor. A cursory understanding of history indicates that the European explorers arriving on the ‘pristine’ shores of North America found an abundant land filled with often unreasonably savage tribes of Indians who loved nothing more than hiding the bush and...
4 Pages(1000 words)Essay

...; resolutions were thus adopted in emphasizing that woman and man deserved equal recognition in society – privileges and full rights. Additionally, as women assumed positions of leadership, often ridicules followed by the press. Conclusion The era of antebellum marks a very important transition in the history of American women. The responsiveness rate of women to the new exposures of education and public involvement revealed their potential to achieve what had been denied them for long. Despite constant ridicules, women strived to attain positions they felt was their – especially to have a say and be heard. Reference: Dorsey, Bruce, Reforming Men and Women: Gender in the Antebellum...
2 Pages(500 words)Essay

...Colonial America Colonial America The Women of the American Revolution is a book written by Ellet, Elizabeth Fries. The book was published by Baker and Scribner in New York. The book’s main subject is focused on women in the American Revolution. Elizabeth Ellet started to inspire scholars by writing her books, which enable them to recover and record the contribution and lives of women in various perspectives. Ellet published her work in a variety of genres making her one of the best known writers. Ellet did not follow the required roles of women and, therefore, was embroiled in public battles with prominent men, such as Edgar Poe and Rufus who referred to her as a troublemaker. The Women of the American Revolution is a book... that is...
4 Pages(1000 words)Book Report/Review

...Colonial Life in North America Introduction Life in the new colony held both positive and negative influences on the immigrants from England in terms of weather, health and religion among other things. In the new colony North America was better in terms of weather conditions for example in Virginia the winter was not that harsh and not long unlike in England (Stefoff 14). They also excelled in religion as there was no religious persecution unlike in England and they even started up their own church called Quakers. All was not smooth however as there were new diseases that started killing people. With the new...
1 Pages(250 words)Essay

...US Colonial North American from 1607-1865 Imaginary debate between Nathaniel Bacon and Sir William Berkeley before the Bacon’s rebellion of 1676 Nathaniel Bacon: I call on the governor to act and protect the property of the whites from constant Indian attack. The people of Henrico County have spoken by electing me to represent their view at the House of Burgesses where I promise to serve the people by protecting their interests. Instead, I beseech the governor and his administration to consider some of the concerns of the people that I represent. By doing this, the governor would help avoid the constant tussles in the colony thereby creating a peaceful and cohesive...
5 Pages(1250 words)Research Paper
sponsored ads
Save Your Time for More Important Things
Let us write or edit the term paper on your topic "The African American experience in colonial and antebellum North America" with a personal 20% discount.
GRAB THE BEST PAPER

Let us find you another Term Paper on topic The African American experience in colonial and antebellum North America for FREE!