Comments (0)
Add to wishlistDelete from wishlist
Cite this document
Summary
The southern economy was agricultural and depended on the cotton plantation. Due to the nature of work in the plantations, the states needed more cheap labor hence the use of slaves. The…
Download full paperFile format: .doc, available for editing
HIDE THIS PAPERGRAB THE BEST PAPER98.1% of users find it useful 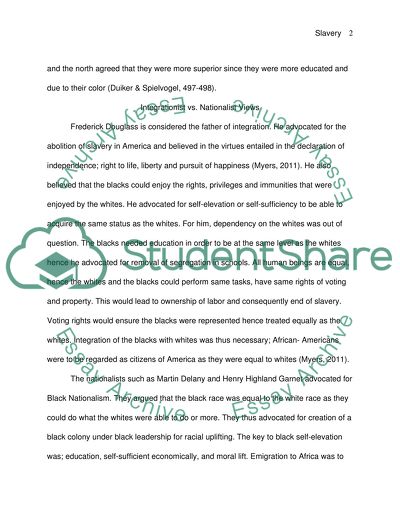 Topic: Lecturer: Presentation: Southern and Northern Slavery The southern and northern s varied in terms of the economic activities they engaged in. The southern economy was agricultural and depended on the cotton plantation. Due to the nature of work in the plantations, the states needed more cheap labor hence the use of slaves. The southern depended so much on the slaves that they were determined to maintain them at all cost (Duiker & Spielvogel, 497). The northern economy on the other hand, was based on agriculture and industry. The cotton harvested in the south was processed into finished products in the northern industries hence less need for labor. Due to industrialization, the north comprised of educated people both blacks and whites (Morgan, 68).
As a result of the differences in northern and southern economies, perceptions about slavery also differed between the two economies. According to Morgan (68), the northern whites worked alongside the blacks in the industries and the blacks were not subjected to degradation. Some whites owned slaves who worked in farms and houses and one could buy his/her freedom. On contrary, the southern slaves did not mix with whites; they were slave societies. The African-American slaves were considered inferior to the whites hence subjected to hard work under poor working conditions. The northern was religious and believed in the unalienable rights of all human beings. Slavery was thus abolished in the north and all slaves freed. However, even after the emancipation proclamation by Lincoln, the south used Ku Klux Klan to maintain white supremacy; the blacks were denied the right to vote as they were inferior race. However, both the south and the north agreed that they were more superior since they were more educated and due to their color (Duiker & Spielvogel, 497-498).
Integrationist vs. Nationalist Views
Frederick Douglass is considered the father of integration. He advocated for the abolition of slavery in America and believed in the virtues entailed in the declaration of independence; right to life, liberty and pursuit of happiness (Myers, 2011). He also believed that the blacks could enjoy the rights, privileges and immunities that were enjoyed by the whites. He advocated for self-elevation or self-sufficiency to be able to acquire the same status as the whites. For him, dependency on the whites was out of question. The blacks needed education in order to be at the same level as the whites hence he advocated for removal of segregation in schools. All human beings are equal, hence the whites and the blacks could perform same tasks, have same rights of voting and property. This would lead to ownership of labor and consequently end of slavery. Voting rights would ensure the blacks were represented hence treated equally as the whites. Integration of the blacks with whites was thus necessary; African- Americans were to be regarded as citizens of America as they were equal to whites (Myers, 2011).
The nationalists such as Martin Delany and Henry Highland Garnet advocated for Black Nationalism. They argued that the black race was equal to the white race as they could do what the whites were able to do or more. They thus advocated for creation of a black colony under black leadership for racial uplifting. The key to black self-elevation was; education, self-sufficient economically, and moral lift. Emigration to Africa was to serve the purpose however; Martin did not see the need to get help from the whites while Garnet sought help from white missionaries to colonize Africa and establish a black colony with western values making it equal to the whites or America (Tomek, 187-206).
I would agree with the integrationist ideas of Frederick Douglass. All human beings are equal and have unalienable rights hence the Americans and African-Americans should enjoy the same rights and privileges and work together for the common good so as to eliminate racism and white supremacy. The nationalist ideas are aimed at alienating the blacks and emphasize on colonization. This promotes racism and the whites continue to consider themselves as superior.
References
Duiker, W., Spielvogel, J. The Essential World History, Volume 2: Since 1500. USA: Cengage, 2011.
Morgan, Kenneth. Slavery and Servitude in North America 1607-1800. Edinburgh: Edinburgh University Press, 2000.
Myers, Peter. “Frederick Douglass’s America: Race, Justice, and the Promise of the Founding”. Heritage Foundation. September 10, 2011. http://www.heritage.org/research/reports/2011/01/frederick-douglass-s-america-race-justice-and-the-promise-of-the-founding.
Tomek, Beverly. Colonization and its Discontents: Emancipation, Emigration, and Antislavery. USA: New York University Press, 2011. Read More
Share:
Tags
Cite this document
(“African American History Essay Example | Topics and Well Written Essays - 500 words - 2”, n.d.)
African American History Essay Example | Topics and Well Written Essays - 500 words - 2. Retrieved from https://studentshare.org/history/1579789-african-american-history

CT Program should be nationally recognized by JRCERT and the ARRT

...African American History Introduction Timbuktu It is a town in West Africa, in the western region of Mali. Timbuktu was founded by the Tuareg Imashagan in the 11th century. Because of its geographical location, which is situated uniquely, it was used as a meeting point for the Wangara, Songhai, Fulani, Tuareg and the Arabs. Timbuktu flourished from trade, which was between West Africa and North Africa. The main trade items were gold, salt, ivory and slaves. Slave trade flourished because of the existence of the Arabs. Timbuktu was brought under the French rule in 1893, up until Mali’s independence in 1960 (Franklin, John H, and Alfred, 68). Phillis Wheatley She was a victim of slave...
1 Pages(250 words)Essay

...﻿African American History (1600-1877) OUTLINE The events that shaped African American history and converted the blacks from being slave to free people were forced transportation of black people for slave trade, American Revolution, the Great Awakening, the very famous war of 1812 and the civil war. Slave trade is the first incident that shows the deprivation of Black population of their basic human rights as blacks were transported to other lands for labour purposes. Second in line is the event of Great Awakening, which helped people to recognize their existence according to their religion, as Great Awakening resulted in...
11 Pages(2750 words)Research Paper
sponsored ads
Save Your Time for More Important Things
Let us write or edit the essay on your topic "African American History" with a personal 20% discount.
GRAB THE BEST PAPER

Let us find you another Essay on topic African American History for FREE!