Comments (0)
Add to wishlistDelete from wishlist
Cite this document
Summary
Chapter 9 of the book discusses literary experimentations in historical writing between 1970 and 1990 following cultural, economic, and political changes. Most importantly, the chapter contains an elaboration of the discussion of innovative writings that led to postmodernism and…
Download full paperFile format: .doc, available for editing
HIDE THIS PAPERGRAB THE BEST PAPER94.2% of users find it useful 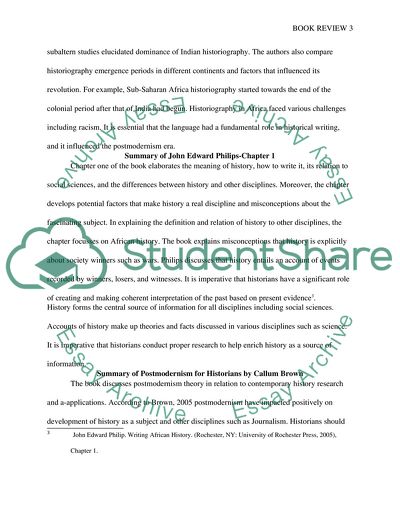 Books Review Part Summary of is History Fiction?-Chapter 9 Chapter 9 of the book discusses literary experimentations in historical writing between 1970 and 1990 following cultural, economic, and political changes. Most importantly, the chapter contains an elaboration of the discussion of innovative writings that led to postmodernism and post-structuralism in history. Insights on postmodernism and post-structuralism theories have led to the development of contemporary historical writings including micro-history, history of sexuality, postcolonial histories, and gender history1. It is imperative that the posts-structuralism has transformed historical writing to modern interpretations based on existing evidences of past events. Revolution in writing history have consequently changed the genealogy of traditional cultures and resulted into present study topics. It is vital that revolution in interpreting the discipline have led to doubts over the existence of factual history.
Summary of Global History of Modern Historiography-Chapter 6 (Pgs. 281-306)
Chapter 6 of the book entails a discussion of postmodernism and linguistic turn, development of contemporary historiography in sub-Saharan Africa, Latin America history, subaltern studies, and post-colonialism. The authors of the book relate the aforementioned discussion topics to current historical challenges in the post-war period. The authors use concepts of post-colonialism and postmodernism in discussing the modernism in historical writing2. Post colonialism led to a revolution in non-western countries systems including education, politics, and culture. Africa, for example, experienced the postmodernism era when they adopted western culture after attainment of independence. Subaltern studies remained imperative in explaining historical effects of post-colonialism and war on both East and west countries. For instance, subaltern studies elucidated dominance of Indian historiography. The authors also compare historiography emergence periods in different continents and factors that influenced its revolution. For example, Sub-Saharan Africa historiography started towards the end of the colonial period after that of India had begun. Historiography in Africa faced various challenges including racism. It is essential that the language had a fundamental role in historical writing, and it influenced the postmodernism era.
Summary of John Edward Philips-Chapter 1
Chapter one of the book elaborates the meaning of history, how to write it, its relation to social sciences, and the differences between history and other disciplines. Moreover, the chapter develops potential factors that make history a real discipline and misconceptions about the fascinating subject. In explaining the definition and relation of history to other disciplines, the chapter focusses on African history. The book explains misconceptions that history is explicitly about society winners such as wars. Philips discusses that history entails an account of events recorded by winners, losers, and witnesses. It is imperative that historians have a significant role of creating and making coherent interpretation of the past based on present evidence3.
History forms the central source of information for all disciplines including social sciences. Accounts of history make up theories and facts discussed in various disciplines such as science. It is imperative that historians conduct proper research to help enrich history as a source of information.
Summary of Postmodernism for Historians by Callum Brown
The book discusses postmodernism theory in relation to contemporary history research and a-applications. According to Brown, 2005 postmodernism have impacted positively on development of history as a subject and other disciplines such as Journalism. Historians should embrace postmodernism theory in research and teaching of history. Postmodern theory is imperative in modern history based on its seven main significant themes which include empiricist inheritance, sign, discourse, text, self, morality, and post-structuralism. The aforementioned themes explain development of postmodernism and how historians uses it in research and teaching unknowingly though they doubt its importance4. Despite adverse critics by scholars on relevance of postmodernism, the theory has vast influential applications in social research and teaching history as a discipline. Moreover, postmodernism have widened history by introducing new disciplines including popular culture, gay history, women history, and postcolonial history.
Part 2
Two Discussion Questions in relation to Subject
Question 1
Has postmodernism lead to the emergence of fiction in history?
Question 2
How important was linguistic diversity in development of modern history?
Need to clarify the questions
Question 1 seeks to establish if contemporary interpretation of ancient events has resulted into non-factual history and research. The question aims at eliminating misconceptions about historical development. Question 2 would address relevance of languages in understanding modern history. Languages remained imperative in historical writing of events from diverse cultures.
Bibliography
Brown, Collins G. Postmodernism for Historians. Edinburg: Pearson Education Limited, 2005.
Philips, John Edward. Writing African History. Rochester, NY: University of Rochester Press, 2005.
Iggers, Georg G, Wang, Edward Q, and Mukherjee, Supriya. A global History of Modern Historiography. London: Routledge, 2013.
Curthoys, Ann, and John Docker. Is history fiction? Sydney: University of New South Wales Press, 2010. Read More
Share:
Tags
Cite this document
(“1- is history fiction, ch. 9, 2- Global History of Modern Book Report/Review”, n.d.)
1- is history fiction, ch. 9, 2- Global History of Modern Book Report/Review. Retrieved from https://studentshare.org/history/1661298-1-is-history-fiction-ch-9-2-global-history-of-modern-historiography-ch-6-pp-281-306-3-phillipsch1-4-brown-excerpts

...operators, for instance, to whom Marx refers in Chapter 7, have been supplanted by a technological revolution that has made the computer a tool nearly as utilitarian and ubiquitous as the spindle once was. In the modern economy, technology transforms the very nature of labor and the way in which that labor produces wealth. In the “Information Age” economy, the laborer’s work product is intrinsically intellectual, a work type rooted in the cogitative rather than the muscular. It places a premium on communication, since computer-based labor is informational, allowing communication to take place in the blink of an eye, and requiring the laborer to locate, extrapolate and respond to Name 2 unprecedented...
2 Pages(500 words)Essay

...?Ch Table of Contents Thesis ment 3 Discussion 3 Conclusion 5 Works Cited 7 Thesis ment The paper’s objective is to discuss upon the promotion of using merit pay by the politicians for the teachers. Moreover, the discussion will be briefed with the help of Deming’s 14 Points. Furthermore, the paper also intends to present the conditions faced by the high schools in implementing or not considering one of the Deming’s Principles among the 14 Points. Discussion Question 1: Some Politicians Are Promoting Using Merit Pay For Teachers. Discuss This From Deming’s Point Of View. You Should Focus On The High School Level. Merit pay can be defined as the bonus paid to the employees...
3 Pages(750 words)Essay

...of the lack of physical activities and little focus on revamping lifestyle and health complications in a logical way. In the context of the South Asian Women, it was found that Indians living in Los Angeles County are not much in numbers but a number of South Asian women around 1-2% from the total 8-10% of South Asian Women population in the US are affected by diabetes and can be considered as a worrying situation. The prevalence of diabetes among South Asian women is mainly because of the genetic factor, eating disorders, and lack of physical activities along with little awareness and understanding of the issue. Statement of the Problem Although, diabetes is a global health problem but...
6 Pages(1500 words)Essay

...Insert Introduction Discussing General Topics from Ch 6 Measuring financial profitability of a retail store would involve,taking into consideration, all expenses which have been used to run the operations of the retail store against the revenue which will have been earned from the same business transactions. The surplus revenue which shall be accrued will be the profit. Retail strategy reflects in retailers’ financial objectives since it is directly proportional to the net profit margin. Effective retail strategy increases asset turnover (the productivity of the firm’s investment in its assets, which in this case efficient retail strategies) by injecting effectiveness in operations and reducing...
1 Pages(250 words)Essay

... Chapter The study of communication plays a crucial role in enhancement of my future personal, social and even career life in making sense of the surroundings and sharing such sense with others, either verbally or nonverbally to create meaning. Specifically, skills in public speaking would be useful in my pursuit to become a university lecturer. This would be important in fostering my ability to inform students of the relevant academic content and persuade them to appreciate the arguments put forth, the reason for which public speaking, also referred to as presentation communication by Beebe, Beebe, and Ivy, is taught (27). Additionally, it would help in advancing my career as I seek to further my education. Thus, a critical... Chapter The...
1 Pages(250 words)Essay

Is history fiction & a global history of modern Historiography

...al Affiliation Lecturer Due Significance of Hinduism to Modern Society The chapter is about the fundamentals of Hinduism and itsdoctrine. The religion is based on ‘sacred knowledge’, which was contained in sacred hymns called the ‘Vedas’ by the Aryans, the original practitioners of Hinduism. Similarities with Christianity and other religions are apparent in the existence of supreme spiritual beings, both good and evil (Novak 13). In Hinduism, like all major religions, man is created by the supreme beings and these beings have the ability to bestow desirable attributes such as wealth and wisdom on men. Hinduism is based on a belief there are many Gods with different functions. For example, Agni was the God of fire (Novak...
2 Pages(500 words)Admission/Application Essay

...was originally practiced by all Muslims when at war or on a long journey to avoid illicit sex. However, it was found to disenfranchise the women and the children born out of the marriage after the man had left even if he paid all the dowry and penalties of divorce. This is a big deal in Islam because inheritance rights have the capacity to influence ones fate in the now and in the hereafter. The other modern problem between the Shiites and the Sunnis is the practice of medical interventions, which are considered unlawful such as abortion and family planning including newer forms of treating sterility. Q2.similarities in practice and traits between the Shiites and the Roman Catholics The Shiites have democratic...
2 Pages(500 words)Assignment