Comments (0)
Add to wishlistDelete from wishlist
Cite this document
Summary
These authors argue that there exists a space between two forms of History. The first form is History as the scrutiny of information sources and History as the…
Download full paperFile format: .doc, available for editing
HIDE THIS PAPERGRAB THE BEST PAPER94.3% of users find it useful 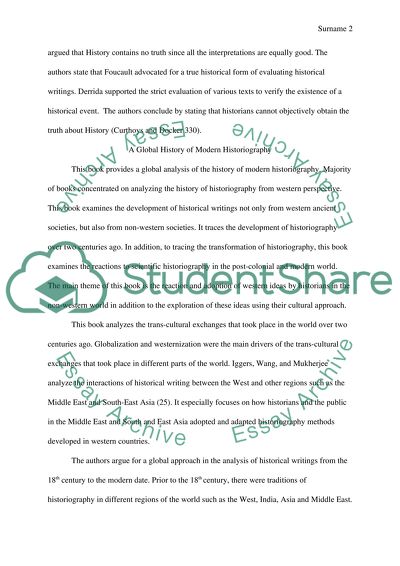 Is History Fiction? & a Global History of Modern Historiography Is History Fiction? Curthoys and Docker question the validity and truth of History by identifying the ‘doubleness of history’. These authors argue that there exists a space between two forms of History. The first form is History as the scrutiny of information sources and History as the collection of various literary forms. They argue that this space room makes History uncertain and full of disagreements. In addition, this doubleness makes History a shifting and self- transforming subject. Curthoys and Docker (138) trace this double character back to the beginning of Western History. Early historians view Herodotus as the father of Western History. Unfortunately, Herodotus also orchestrated many lies especially on Greece states.
This book also identifies a double character in Thucydides’ History. Thucydides’ History double’s character is that it represents a focused accounts of events but at the same time, it is also an excellent literary works. Curthoys and Docker argue that although Herodotus and Thucydides are important history writings, they represent different modes of writings (169).
The contrast in Herodotus and Thucydides also involve the quality of the writings. These two History writings use cosmopolitan and internationalists modes to write History. In the progress, they ignored classical Greece sources and therefore, failed to write History as a progressive story.
This book also highlights the questioning of the truth of history that took place in the 1960s and 70s known as the postmodernism. Poststructuralists like Foucault and Derrida argued that History contains no truth since all the interpretations are equally good. The authors state that Foucault advocated for a true historical form of evaluating historical writings. Derrida supported the strict evaluation of various texts to verify the existence of a historical event. The authors conclude by stating that historians cannot objectively obtain the truth about History (Curthoys and Docker 330).
A Global History of Modern Historiography
This book provides a global analysis of the history of modern historiography. Majority of books concentrated on analyzing the history of historiography from western perspective. This book examines the development of historical writings not only from western ancient societies, but also from non-western societies. It traces the development of historiography over two centuries ago. In addition, to tracing the transformation of historiography, this book examines the reactions to scientific historiography in the post-colonial and modern world. The main theme of this book is the reaction and adoption of western ideas by historians in the non-western world in addition to the exploration of these ideas using their cultural approach.
This book analyzes the trans-cultural exchanges that took place in the world over two centuries ago. Globalization and westernization were the main drivers of the trans-cultural exchanges that took place in different parts of the world. Iggers, Wang, and Mukherjee analyze the interactions of historical writing between the West and other regions such as the Middle East and South-East Asia (25). It especially focuses on how historians and the public in the Middle East and South and East Asia adopted and adapted historiography methods developed in western countries.
The authors argue for a global approach in the analysis of historical writings from the 18th century to the modern date. Prior to the 18th century, there were traditions of historiography in different regions of the world such as the West, India, Asia and Middle East. The authors state that nationalistic historiographies developed in various countries of the world. These academic historiographies mainly began in the western countries and later on spread to non-western countries (Iggers, Wang, and Mukherjee 21). The historiographies developed in non-western countries followed the western models to a certain extent.
This book also highlights how new currents of historiography challenged the nationalist and political historiography in the twentieth century. Iggers, Wang, and Mukherjee state that Marxist, cultural, feminist and gender historiographies challenged the political historiography that had developed in the 18th and 19th centuries (21).
Discussion questions
1. Do Historians write about the past using the present terms or do they represent an objective account of the past?
2. Why do historians focus more on the development of historiography in the western world while ignoring the non-western regions?
References
Curthoys and Docker. Is History Fiction? Sydney, AUS: UNSW Press, 2010. Print.
Iggers, Wang, and Mukherjee. A Global History of Modern Historiography. New York, NY: Routledge Publishers, 2008. Print. Read More
Share:
Tags
Cite this document
(“Is history fiction & a global history of modern Historiography Book Report/Review”, n.d.)
Is history fiction & a global history of modern Historiography Book Report/Review. Retrieved from https://studentshare.org/history/1657003-is-history-fiction-a-global-history-of-modern-historiography

“Is History Fiction & A Global History of Modern Historiography Book Report/Review”, n.d. https://studentshare.org/history/1657003-is-history-fiction-a-global-history-of-modern-historiography.
Comments (0)
Click to create a comment or rate a document

...colonial authorities in 1821. Stephen Austin’s settlers were then, directed to become Mexican citizens; members of the Roman Catholic Church and learn Spanish. When Mexican government condemned slavery, Texans (Americans in Austin’s colony) rebelled and were declared republic in 1839. Post colonial era witnessed major conflicts, the War of the Triple Alliance (1864–1870) and the War of the Pacific (1879–1884). Porfirio Diaz (1884-1910) tried to maintain law and order in Mexico. He helped modernize economy by boosting foreign investment; export of the natural resources and expanding railroads though majority of land and resources remained concentrated in hands of wealthy owners, resulting majority population poor. In the...
1 Pages(250 words)Assignment

...? Comparing History and Historiography Location May 15th History is the most difficult education to delineate precisely since various disciplines persuade and contribute to it; as such students consider it to be tedious and difficult to comprehend. Likewise, historiography is a complex part of history course that many students struggle to understand and lack confidence in discussing. This essay will aim to elucidate what history and historiography are, analyze differences between the two terms and discuss why it is essential to have an understanding of them. Definition of terms History can be defined as...
3 Pages(750 words)Essay

...Running Head: History History and Historiography Introduction Every person has its own perception, which is one of the important characteristics of this world. Thus, every term is taken differently by each member of this planet. However, at some places, common sharing of thinking results in the unison of nations. In this regard, all the past events can be regarded as the history, if it is taken in broad manner. However, the humans have not been able to know all the past events that have occurred since the advent of human on this planet. Thus, the known past has been considered as the proper and realistic definition of the term history by most of the historians. Moreover, some more terms have been originated from the term history... , such as...
6 Pages(1500 words)Essay

...﻿Irish History A Brief Historiography From whatever perspective you choose to view Irish history, whether from a nationalist viewpoint advocating the ultimate break from Britain and all she stood for, or from a unionist or British perspective where you might see Ireland’s role as an integral part of the largest and most powerful empire the world had ever known, there are no clear arguments to justify one sides perspective at the expense of the other. No one side has a monopoly of rights on their side and to view Irish history or any other nation’s history from just one perspective is to do an injustice to the subject. From a nationalist point of view its...
21 Pages(5250 words)Essay

...Global History The causal chain (what caused what) which led to the emergence of democratic polis communities. In 10th century the growth of population brought great pressure on the available land in Greek. It led to the age of colonization, in the 6th century Greek stretched far beyond the Aegeans, from the Black Sea, France and Sicily in the west and Libya in the south. But this was the result of centuries during which other factors also contributed Greek settled in the south Italy in order to trade whether for the wealth or metal which they needed in Greek. The traders and farmers were not the only agents disseminating Greek ways and teaching Greek about the outside world. Homer shows us a polity of...
5 Pages(1250 words)Essay

...of Marxism were excluded by Lenin from the start. By the time Stalin came to power, communism was twisted away from Marx’s original concept of a socialist society. If the Russians had known the direction communism was taking, history might be different. As it stands, a strong government presence in everyday Soviet life was overwhelming, from the secret police to the gulags. The Soviet government ruled its citizens with a bigger influence than Tsarist Russia. Nazi Germany was formed by the influences of WWI and the Great Slump. Adolf Hitler and many Germans struggled under the burden and shame of the Versailles Treaty in 1919. The restitution forced upon Germany made the Great Slump unbearable. Unemployment, food...
4 Pages(1000 words)Essay

...Global History Globalization is an international phenomenon with important geopolitical ramifications. The current of world affairs has its precursors in the social revolution of the 1960s, economic crises in the 1970s culminating the collapse of the New Deal and the OPEC oil crisis, as well as the emergence of neo-liberalism as a driving political and economic force in the 1980s. Events from the late 1960s reverberated in the Communist world and finally came to a head in the 1980s with total economic and political collapse. The Soviet sphere, coupled with the former Yugoslavia, provide the best examples of this phenomenon. Additionally, the end of the Cold War has had important...
6 Pages(1500 words)Essay

...Evolution of Historiography and History of Research Methods Research methods are made up of guidelines and techniques utilized by historians to writehistory after researching primary sources and other available clues. According to Karlovysky and Sabloff (1979), Herodotus of Halicarnassus is regarded as the founder if history but Thucydides is the one who first approached history with a historical method that was well developed while writing the history of the War of the Peloponnesians. Thucydides highlighted chronology in his research method. The current western historiography methods were established in Germany and France sometime...
2 Pages(500 words)Essay

Let us find you another Book Report/Review on topic Is history fiction & a global history of modern Historiography for FREE!