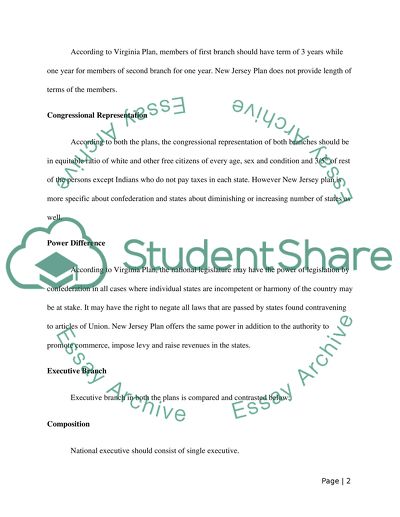 Virginia Plan and New Jersey Plan Structural Differences The structural differences between the two plans are discussed as follows:
Numbers of Branches
According to both plans, the government should consist of executive, judiciary and legislative.
Number of Houses
According to Virginia Plan, there should be two houses of the National Legislature while New Jersey Plan does not account for two branches.
Congressional Members
According to Virginia Plan, congressional members of first branch should be chosen by people of several states while the members of second branch should be chosen by individual legislatures while New Jersey plan states that members should be chosen by the public.
Length of Terms
According to Virginia Plan, members of first branch should have term of 3 years while one year for members of second branch for one year. New Jersey Plan does not provide length of terms of the members.
Congressional Representation
According to both the plans, the congressional representation of both branches should be in equitable ratio of white and other free citizens of every age, sex and condition and 3/5th of rest of the persons except Indians who do not pay taxes in each state. However New Jersey plan is more specific about confederation and states about diminishing or increasing number of states as well.
Power Difference
According to Virginia Plan, the national legislature may have the power of legislation by confederation in all cases where individual states are incompetent or harmony of the country may be at stake. It may have the right to negate all laws that are passed by states found contravening to articles of Union. New Jersey Plan offers the same power in addition to the authority to promote commerce, impose levy and raise revenues in the states.
Executive Branch
Executive branch in both the plans is compared and contrasted below:
Composition
National executive should consist of single executive.
Selection
Virginia Plan states that executive should be selected for 7 years by national legislature while New Jersey Plan does not state about the length of term.
Powers of Executive
According to both plans, executive may negate any legislation that may not be passed by 2/3rd of national legislature. Executive may have powers to execute national laws to appoint to offices or impeach for certain reasons. New Jersey Plan states the same powers for executive in addition to directing military operations without taking any command over troops.
Judicial Branch
Judicial Branch is compared below:
Composition and Selection of Supreme Court
According to both the plans, judicial branch will be composed of one Supreme Court tribunal selected by second branch of national legislature.
Additional Courts
According to Virginia Plan, national legislature will be empowered to select inferior tribunals while New Jersey Plan does not state about additional courts.
Power of New Federal Govt.
Comparing both the plans, it is specifically found that New Jersey plan offers more power to the new federal government because it focuses to revisit and enlarge articles of confederation and gives executive authority to direct military operations as well. Read More
Share:
Tags
Cite this document
(“Compare and contrast the Virginia and New Jersey plans presented at Essay”, n.d.)
Retrieved from https://studentshare.org/history/1659549-compare-and-contrast-the-virginia-and-new-jersey-plans-presented-at-the-constitutional-convention

(Compare and Contrast the Virginia and New Jersey Plans Presented at Essay)
https://studentshare.org/history/1659549-compare-and-contrast-the-virginia-and-new-jersey-plans-presented-at-the-constitutional-convention.

“Compare and Contrast the Virginia and New Jersey Plans Presented at Essay”, n.d. https://studentshare.org/history/1659549-compare-and-contrast-the-virginia-and-new-jersey-plans-presented-at-the-constitutional-convention.
Comments (1)
Click to create a comment or rate a document

gi
gilda92 added comment 5 hours ago
Student rated this paper as
Perfect work done on the "Compare and contrast the Virginia and New Jersey plans presented at the Constitutional Convention". I think it is the best sample I have seen so far.

...as the Virginia Plan. The Virginia Plan established elements of two houses and a judiciary branch. Madison’s plan also included the executive branch that would have a veto power to override votes from the houses. In many regards, one sees Madison’s early formulations as articulated in the Virginia Plan in operation in the contemporary United States government. Madison’s Virginia Plan, along with plans presented by Charles Pickney, New Jersey delegates, and Alexander Hamilton would come to be debated on (Mee). Ultimately,...
4 Pages(1000 words)Essay

Children's views, needs, wishes and feelings are at the heart of national legislation and international agreements and convent

...of law, constitutional conventions are not exercisable in a court of law no matter how established they may be. They can only be exercised when the parliament or the national assembly passes a decree or constitutional amendment codifying the convention. The above principle UK is viewed as authoritative and acceptable in many other jurisdictions, including the most of the common wealth countries (The Economist Intelligence Unit, 2005). Constitutional conventions are not always acceptable due to various reasons. One prominent reason is that they keep on changing overtime as compared to written laws that would require...
4 Pages(1000 words)Essay

..., 1788). Indeed, the constitutional ratification by the states would give political legitimacy to the American constitution and establish its credibility and dominant position in the world forum. (512) Reference Lincoln, Abraham. Available from:
2 Pages(500 words)Essay

The Internment of and Assimilation of Japanese-American

6 Pages(1500 words)Research Paper
sponsored ads
Save Your Time for More Important Things
Let us write or edit the essay on your topic "Compare and contrast the Virginia and New Jersey plans presented at the Constitutional Convention" with a personal 20% discount.
GRAB THE BEST PAPER

Let us find you another Essay on topic Compare and contrast the Virginia and New Jersey plans presented at the Constitutional Convention for FREE!