Comments (1)
Add to wishlistDelete from wishlist
Cite this document
Summary
It began with a minor skirmish between Germans and Polish, and it ended with the most brutal act of history. It is also considered as the later part of the Great War. There is no specific…
Download full paperFile format: .doc, available for editing
HIDE THIS PAPERGRAB THE BEST PAPER93.2% of users find it useful 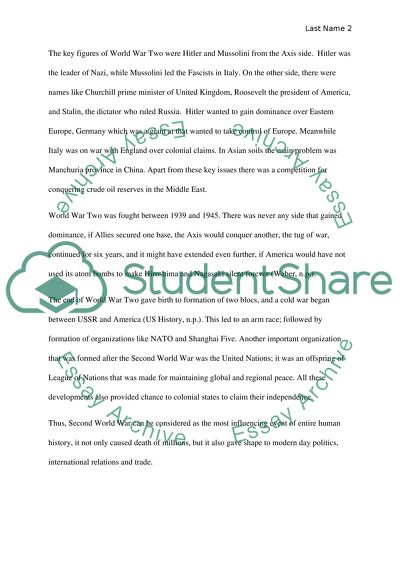 World War 2 World War Two is considered as one of the most devastating event of entire human history. It began with a minor skirmish between Germans and Polish, and it ended with the most brutal act of history. It is also considered as the later part of the Great War. There is no specific reason for World War Two; it was a result of various conflicts between different countries (HistoryNet, n.p.). Some countries were fighting over territorial rights, others were intervening for the sake of survival, and there were some who wanted dominance. If one concentrates on the world map. One would realize that there was no need for United States of America to become a party in war (Blum).
The Second World War was fought on European and Asian soils. There were two groups of countries that are involved in the war. The Allies and the Axis, the former faction included giants like Russia, United Kingdom, United States of America, and other anti-Nazi European countries. The three main players of Axis were Germans, Italians and Japan in the east (British Library, n.p.). Despite, the territorial clashes, there was severe damage to the civilian. There were genocides in the name of purification or superiority; there were mass killings in China and Korea. In total World War Two produced over fifty million deaths, the highest for any war.
The key figures of World War Two were Hitler and Mussolini from the Axis side. Hitler was the leader of Nazi, while Mussolini led the Fascists in Italy. On the other side, there were names like Churchill prime minister of United Kingdom, Roosevelt the president of America, and Stalin, the dictator who ruled Russia. Hitler wanted to gain dominance over Eastern Europe, Germany which was a giant at that wanted to take control of Europe. Meanwhile Italy was on war with England over colonial claims. In Asian soils the main problem was Manchuria province in China. Apart from these key issues there was a competition for conquering crude oil reserves in the Middle East.
World War Two was fought between 1939 and 1945. There was never any side that gained dominance, if Allies secured one base, the Axis would conquer another, the tug of war, continued for six years, and it might have extended even further, if America would have not used its atom bombs to make Hiroshima and Nagasaki silent forever (Weber, n.p.).
The end of World War Two gave birth to formation of two blocs, and a cold war began between USSR and America (US History, n.p.). This led to an arm race; followed by formation of organizations like NATO and Shanghai Five. Another important organization that was formed after the Second World War was the United Nations; it was an offspring of League of Nations that was made for maintaining global and regional peace. All these developments also provided chance to colonial states to claim their independence.
Thus, Second World War can be considered as the most influencing event of entire human history, it not only caused death of millions, but it also gave shape to modern day politics, international relations and trade.
Works Cited
British Library. "World Wars." THE BRITISH LIBRARY - The worlds knowledge. N.p., 2014. Web. 9 July 2014. .
HistoryNet. "World War II | Facts Summary Information." N.p., 2014. Web. 9 July 2014. .
US History. "Cold War." United States American History. N.p., 2014. Web. 9 July 2014. .
Weber, Mark. "The Good War Myth of World War Two." INSTITUTE FOR HISTORICAL REVIEW --. N.p., 2008. Web. 9 July 2014. . Read More
Share:
Tags
Cite this document
(“World War 2 Essay Example | Topics and Well Written Essays - 500 words - 1”, n.d.)
World War 2 Essay Example | Topics and Well Written Essays - 500 words - 1. Retrieved from https://studentshare.org/history/1652178-world-war-2

ge
geovannischuste added comment 8 months ago
Student rated this paper as
I didn’t know how to start my text. "World War 2" helped me out a lot! Especially the list of introduction was valuable.

CHECK THESE SAMPLES OF World War 2

...?World War 2 Order No: 761942 History Introduction The Second World War was such a popular and a spontaneous global upheaval which began in 1939 and ended in 1945, remarkably dramatized as “the theatre of war drums.”1 It is believed to have been the most deadly war in world history, sparked by Germany’s invasion of Poland under the command of her chancellor, Adolf Hitler. Whereas this is wide topic, the author’s initial thoughts were based upon the developments and problems that were going on in Germany during this six years period of war. The researcher assesses the development of the...
5 Pages(1250 words)Research Paper

...World War II History Even though the world has witnessed numerous creepy events which jam the mind and leave everyone agape, none of them near the memories of the brutality of the Eastern facade and Pacific drama of World War II. The world remains dumbfounded by the atrocities and viciousness imposed not only on the military but also civilians. The biggest obscurity that remains is who should bear the culpability of the Holocaust. Millions of questions fizz out of the World War II brutality, but unfortunately, neither satisfactory answer has ever been reached nor is there any in the near future. The...
5 Pages(1250 words)Essay

...World War Two Roosevelt Identifies the ‘Four Freedoms’ at Stake in the War- 1941 The First essay to be analyzed is that of Roosevelt identifying the ‘four freedoms’ which were at stake in the Second World War in 1941. At first Roosevelt noted the expectations by the US people of both the economic and the political systems. The expectations included equal opportunities of work for the youth as well as others so long as the concerned could work, the termination of special treatments to the few, security for the deserving, civil liberty for the entire population and lastly, the equal distribution of the technological progress by way of improving standards...
5 Pages(1250 words)Essay

World War 2 - War in the Pacific

...Section/# Japanese Imperial Expansion Prior to Conflict with the United s Although it is convenient to think of Japanese Imperial expansion within the Pacific as something that began and ended with the outset of World War II and the Japanese surrender after the utilization of the atomic bombs on Hiroshima and Nagasaki, the fact of the matter is that Japanese expansion within the Pacific can trace its roots back long before Pearl Harbor or even the outbreak of World War 1. As a function of understanding the full depth and complexity of this issue, this brief analysis will seek to understand and detail the ways in which Japanese Imperial expansion occurred from the time...
5 Pages(1250 words)Essay

...World War 2 The second world war is one of the biggest events to have affected the twentieth century and its outcomecould not have been an allied victory without three men namely Joseph Stalin, Franklin Roosevelt, and Winston Churchill. These individuals, leading the Soviet Union, the United States, and Britain respectively held various conferences during the second world war in a bid to ensure that they developed, coordinated efforts towards defeating the axis powers led by Germany, Italy, and Japan. The Yalta Conference was one of these and the meeting was held in by these three leaders in a bid to discuss the postwar...
4 Pages(1000 words)Essay

IT strategy and information system

...Adolf Hitler and World War II Rise to Power The year 1920 was a defining point for Hitler’s success by the reorganization of German Workers’ party. It renamed as National Socialist German Workers, the Nazi. Hitler became the chair of the party in 1921. He managed to accomplish leadership in the party resulting of his paramount skill as a speaker. He held large multitudes spellbound by his oratory speech. He structured the party into a paramilitary organization and managed to win the support of many prominent nationalists like Field Marshal Ludendorff (Rice 35). In the year 1923, Hitler anticipated to coup the republican government in a “beer-hall putsch.” The Leading Bavarian officials, the...
2 Pages(500 words)Essay

...control. For example; The Jewish population of Poland, Lithuania, Latvia, the Soviet Union, France, Belgium, the Netherlands and more! In addition, stated on page 792, “In 1944 at the behest of Secretary of the Treasury Henrey Morgenthau, helped move 200,000 European Jews to safe havens in other countries.” This was a horrific event that occurred. Lastly, the top secret Manhatten Project changed the war drastically. The Manhattan Project was a research and development project that produced the first nuclear weapons during World War II. This project costed over $2 billion and ultimitly helped us win the War. (page 795) “In any event, the atomic bombs...
14 Pages(3500 words)Assignment

9 Pages(2250 words)Research Paper
sponsored ads
Save Your Time for More Important Things
Let us write or edit the essay on your topic "World War 2" with a personal 20% discount.
GRAB THE BEST PAPER

Let us find you another Essay on topic World War 2 for FREE!