Comments (0)
Add to wishlistDelete from wishlist
Cite this document
Summary
European countries were competing for huge quantities of land in Africa in search of resources and this led to partitioning of the African continent. This paper focuses on the…
Download full paperFile format: .doc, available for editing
HIDE THIS PAPERGRAB THE BEST PAPER93.3% of users find it useful 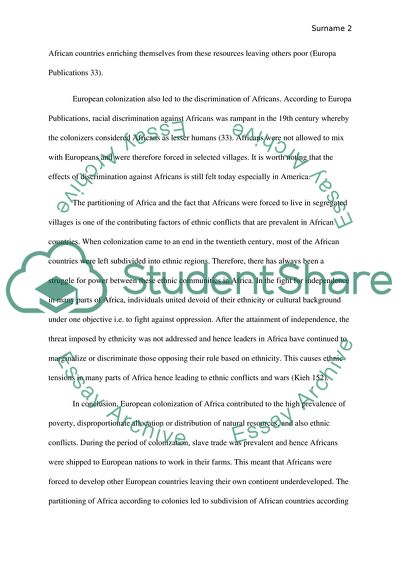 Major consequences of European colonization of Africa A few centuries preceding the twentieth century saw the colonization of Africa by European countries. European countries were competing for huge quantities of land in Africa in search of resources and this led to partitioning of the African continent. This paper focuses on the major consequences of European colonization of Africa.
One of the major consequences of European colonization of Africa is widespread poverty. According to Mammo, "The colonial legacy is responsible for African underdevelopment, the primary cause of African poverty and all the crises which followed was the exploitation of human as well as natural resources by the colonizers" (24). Mammo elucidates the fact that the rate of development in Africa cannot be considered to have been substandard as compared to other parts of the world. African development was significantly affected after its colonization by European countries. It is worth noting that colonization was characterized by slave trade between the seventeenth century and twentieth century. Instead of Africans developing there continent, there were sold as slaves in other parts of the world particularly in America to work in the farms. Therefore, Africa remained underdeveloped as other parts of the world were developing at a very rapid rate (Mammo 24). The partition of Africa into colonies led to disproportionate allocation of resources since some of the colonies had higher quantities of mineral resources than others. Subsequently, this has led to some African countries enriching themselves from these resources leaving others poor (Europa Publications 33).
European colonization also led to the discrimination of Africans. According to Europa Publications, racial discrimination against Africans was rampant in the 19th century whereby the colonizers considered Africans as lesser humans (33). Africans were not allowed to mix with Europeans and were therefore forced in selected villages. It is worth noting that the effects of discrimination against Africans is still felt today especially in America.
The partitioning of Africa and the fact that Africans were forced to live in segregated villages is one of the contributing factors of ethnic conflicts that are prevalent in African countries. When colonization came to an end in the twentieth century, most of the African countries were left subdivided into ethnic regions. Therefore, there has always been a struggle for power between these ethnic communities in Africa. In the fight for independence in many parts of Africa, individuals united devoid of their ethnicity or cultural background under one objective i.e. to fight against oppression. After the attainment of independence, the threat imposed by ethnicity was not addressed and hence leaders in Africa have continued to marginalize or discriminate those opposing their rule based on ethnicity. This causes ethnic tensions in many parts of Africa hence leading to ethnic conflicts and wars (Kieh 152).
In conclusion, European colonization of Africa contributed to the high prevalence of poverty, disproportionate allocation or distribution of natural resources, and also ethnic conflicts. During the period of colonization, slave trade was prevalent and hence Africans were shipped to European nations to work in their farms. This meant that Africans were forced to develop other European countries leaving their own continent underdeveloped. The partitioning of Africa according to colonies led to subdivision of African countries according to ethnicity. After the end of colonization therefore, the issues of ethnicity were not addressed and therefore there has been ethnic conflicts as different ethnic groups compete for political positions.
Works cited
Europa Publications. Africa South of the Sahara 2004. London: Taylor & Francis Group, 2004. Print.
Kieh, George Clay, eds. Beyond State Failure and Collapse: Making the State Relevant in Africa. Plymouth: Lexington Books, 2007. Print.
Mammo, Tirfe. The Paradox of Africas Poverty: The Role of Indigenous Knowledge, Traditional Practices and Local Institutions-The Case of Ethiopia. Asmara: The Red Sea Press, 1999. Print. Read More
Share:
Tags
Cite this document
(“African studies Essay Example | Topics and Well Written Essays - 500 words - 1”, n.d.)
Retrieved from https://studentshare.org/history/1639791-african-studies

CHECK THESE SAMPLES OF African studies

...?African Studies and Feminism Van Allen’s analysis (1972) makes the important point that Colonialism caused a tremendous amount of loss to Igbo women. This challenges the common view that Colonialism was a good thing, and that it saved women from all kinds of barbarous practices. Igbo women had played an active role in the leadership of their communities before colonial times. It was the imposition of Western ideas that resulted in women’s roles being thoroughly regulated and restricted. A second important insight is that there is an underlying reason for the exclusion of Igbo women from modern regional and state politics. This reason is the transfer of sexist and discriminatory attitudes from the...
3 Pages(750 words)Term Paper

...6 May The experience of being Black is unique among North American ethnic minorities. African Americans are the largest ethnic minority in the United States, but they are the only group of people(s) that in 1619, entered Western society against their will and were then victimized by two hundred years of slavery. The evolution of slavery aided in the development of a racist ideology that promoted the belief that blacks are inferior to whites, a myth that persisted long after slavery was abolished, and one that is deeply embedded within our national discourse. Cultural racism, such as this, fosters a “we” and “they” mentality, a state of mind that is maintained through the socialization of new generations. The abolition of...
7 Pages(1750 words)Essay

Romantic Melodrama Based on a Womans Life

Definition Of The Profession

..., because I am part of a project to gather firewood for the refugees in the camp. (Loescher and Milner, 2005, p. 164) The pay is very low, but it helps. I am trying to save some money but it is very difficult because we need it when one of the children gets sick. Last month we heard that there was some trouble back in Somalia when violence broke out over food rations, and some soldiers killed and injured refugees when things got out of hand. (The Guardian Newspaper, August 5, 2011). This makes us too scared to go home, but we still have hope and pray to Allah that one day we will return to our homeland. References Horst, C. (2006) Transnational Nomads: How Somalis Cope with Refugee Life in the Dadaab Camps of Kenya....
2 Pages(500 words)Assignment

The Collection of Solid Waste

... Task African American Studies The speaks of elements of racism within colleges and describes a revolution that resulted in thechanges regarding racism aimed at black people in Santa Clara. The chapters detail a history of the beginning of a revolution that changed the perceptions of a country about the black people. The first chapter details the African American protests and black power demonstrations, which had a significant impact on the abolishment of racism. Despite the constitution of the state having illegalised the practice many years on, the vice was still prevalent even within learning institutions, where black people were a minority group and were thus, exposed to racism and discriminatory treatments. The development... of the...
4 Pages(1000 words)Essay

...to the adoption of Islam religion. The encounter of West Africans with the Arabs helped Northern Africa to become a part of the Islamic influence. The Trans-Saharan region had been prepared for acceptance Islam faith in 7th century. Islam was one of the influential factors in the civilization of West Africa where Europeans had refused to penetrate due to the desert conditions. The cultural transformation entailed value for human life, novelty, and social prestige. Political Impacts Powerful kingdoms arose in West Africa due to Trans-Saharan trade. Soninke of Ghana and Mandinka in Mali participated in the trade and accumulated enormous wealth (Shillington 88). Wealth gave the kingdoms the power to maintain rule and...
2 Pages(500 words)Essay
sponsored ads
Save Your Time for More Important Things
Let us write or edit the essay on your topic "African studies" with a personal 20% discount.
GRAB THE BEST PAPER

Let us find you another Essay on topic African studies for FREE!