Comments (0)
Add to wishlistDelete from wishlist
Cite this document
Summary
By 1914, there were approximately, 1034 NGOs in operation. The traditional belief that the NGOs worked on behalf of the local communities has continually shifted to…
Download full paperFile format: .doc, available for editing
HIDE THIS PAPERGRAB THE BEST PAPER98.9% of users find it useful 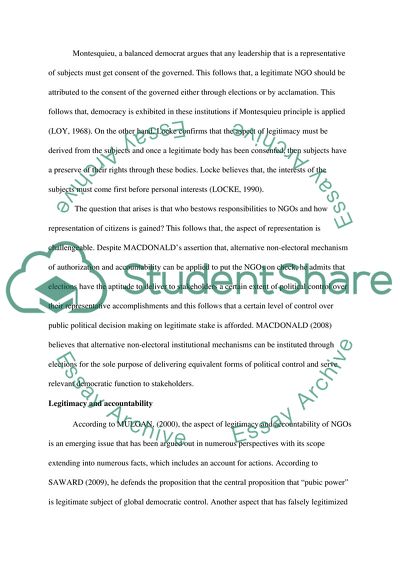 Extract of sample "'NGOs legitimacy and representation at the global level'"

NGOs legitimacy and representation at the global level By History of Introduction International non- governmental organizations are attributed to the history that dates back to the 1839. By 1914, there were approximately, 1034 NGOs in operation. The traditional belief that the NGOs worked on behalf of the local communities has continually shifted to self-seeking and representation. By 1945, the NGOs had reached the top of their operations through the official inclusion of provisions in the United Nations Charter. According to the Yearbook of International Organizations 2013-2014, there are approximately 66,000 International organizations and an annual addition of 1200 new ones (Yearbook of international organizations, 2013).This essay seeks to examine the concepts of legitimacy and representation of these NGOs at the global level. In addition, the essay intends to find out the ways in which accountability and representation can be enhanced.
Representation
As a point of departure, a pressing question on the legitimacy and present political debate on reclaiming the democratic projects in the context of globalization has arose and it needs to be answered. Numerous institutions and scholars have always argued out the extent to which these NGOs are legitimate, responsible and answerable (MACDONALD, 2008). These aspects directly affect the subjects. For instance, the reason for the recent mounting of pressure of high profile campaigns for democratization of powerful international organizations such as the IMF and world Bank includes the belief that, these organizations are neither not representatives of the subjects, nor do they exhibit the aspects of accountable bodies.
Montesquieu, a balanced democrat argues that any leadership that is a representative of subjects must get consent of the governed. This follows that, a legitimate NGO should be attributed to the consent of the governed either through elections or by acclamation. This follows that, democracy is exhibited in these institutions if Montesquieu principle is applied (LOY, 1968). On the other hand, Locke confirms that the aspect of legitimacy must be derived from the subjects and once a legitimate body has been consented, then subjects have a preserve of their rights through these bodies. Locke believes that, the interests of the subjects must come first before personal interests (LOCKE, 1990).
The question that arises is that who bestows responsibilities to NGOs and how representation of citizens is gained? This follows that, the aspect of representation is challengeable. Despite MACDONALD’s assertion that, alternative non-electoral mechanism of authorization and accountability can be applied to put the NGOs on check, he admits that elections have the aptitude to deliver to stakeholders a certain extent of political control over their representative accomplishments and this follows that a certain level of control over public political decision making on legitimate stake is afforded. MACDONALD (2008) believes that alternative non-electoral institutional mechanisms can be instituted through elections for the sole purpose of delivering equivalent forms of political control and serve relevant democratic function to stakeholders.
Legitimacy and accountability
According to MULGAN, (2000), the aspect of legitimacy and accountability of NGOs is an emerging issue that has been argued out in numerous perspectives with its scope extending into numerous facts, which includes an account for actions. According to SAWARD (2009), he defends the proposition that the central proposition that “pubic power” is legitimate subject of global democratic control. Another aspect that has falsely legitimized the NGOs is the acceptance of the association between consent and authority, which has become attenuated resulting to the provision of an unproblematic foundation of legitimacy.
The NGOs’ tendency of overdependence on donor funding is a big decisive test for the NGOs’ independence, as the donors tend to give conditions that threaten the legitimacy and independence of these NGOs (SAWARD, 2009). The fact that, the public that is deemed the custodian of the NGOs has no specific path in keeping them accountable, the NGOs have gone to immense illegitimate and unaccountable heights of mismanagement of resources and misrepresentation. The practices of accountability require that some actors have the privileges to set standard measures of judging other actors in the light of the set standards (LOCKE, 1990). This phenomenon is not seen in the management of NGOs.
Conclusion
In conclusion, inadequate representations and unaccountable practices devalue the face of the NGOs at the international arena. The NGOs should endeavour in centralizing, particularly those at the helm of the international level. This aspect will enhance their togetherness in setting common objectives or themes that reflect the exact situations of the subjective they represent.
List of references
(2013). Yearbook of international organizations 2013-2014. 6 vols. Leiden, Koninklijke Brill NV.
LOCKE, J. (1990). Second treatise of government. Raleigh, N.C., Alex Catalogue. http://search.ebscohost.com/login.aspx?direct=true&scope=site&db=nlebk&db=nlabk&AN=1085948.
LOY, J. R. (1968). Montesquieu. New York, Twayne Publishers.
MULGAN, R. (2000). Accountability: an ever-expanding concept? Canberra, Australian National University.
SAWARD, M. (2009). Authorisation and Authenticity: Representation and the Unelected*. Journal of Political Philosophy. 17, 1-22.
TERRY MACDONALD (2008). Theorizing Global Representative Agency: Non‐Electoral Authorization and Accountability
TERRY MACDONALD. (2008). Instituting Global Representative Agency: The Authorization and Accountability of NGOs. Read More
Share:
Tags
Cite this document
(“'NGOs legitimacy and representation at the global level' Literature review”, n.d.)
'NGOs legitimacy and representation at the global level' Literature review. Retrieved from https://studentshare.org/history/1638402-ngos-legitimacy-and-representation-at-the-global-level

“'NGOs Legitimacy and Representation at the Global level' Literature Review”, n.d. https://studentshare.org/history/1638402-ngos-legitimacy-and-representation-at-the-global-level.
Comments (0)
Click to create a comment or rate a document

...throughout the text. However, beyond the introductory chapter and the logical headings used to divide the work into four main areas, there are some crucial structural weaknesses. In the introductory chapter, the authors describe the ‘hazard-strewn’ nature of relationships between NGOs and corporations, nicely summarise some of the key factors that make them so (2009, p.xxiv). For example, NGOs might recoil from the data discovered on being given access to a corporation’s internal audit, while the media coverage generated by such a collaboration has the potential to harm the legitimacy and reputation of an NGO, sometimes damaging it irreparably. Perhaps most...
8 Pages(2000 words)Literature review

...﻿Trade at global levelGlobalization has made the world interconnected and due to low levels of barriers for international trade, global trade is now a reality in the modern world. Global trade therefore has not only resulted into the transfer of knowledge and expertise but has also made the poorer nations to enjoy relatively better standards of life due to improved trade. It is also however, important to understand that global trade presents its own complexities and risks and organizations have to actually balance different elements in order to ensure that they take full advantage of the opportunities presented by...
4 Pages(1000 words)Dissertation

...for social expenditures. These partnerships between government and NGOs have had groundbreaking results, specifically in the field of sustainable development at the global level. Non-governmental organizations have pressured world governments to come to negotiations, and have been successful in resolving many issues such as the abolition of slavery, rules and procedures on dealing with hazardous wastes and a worldwide restriction on landmines (Ebrahim 2003). With the success of these NGOs in accomplishing these huge goals, governments have lessened their involvements in regulating philanthropic work. They are increasingly aiding non-governmental organizations with...
9 Pages(2250 words)Essay

...The Role of Indonesian NGOs in Education The non-government organization (NGO) is integral to international politics and becoming more active in local settings. NGOs provide services to and act as advocates for society's vulnerable (Lewis and Kanji 2009). Having enjoyed a recent rise in status within neo-liberalism, NGOs have become vital to the ideas and application of progress itself. Educational NGOs in America have demonstrated noteworthy adaptability while facing some thorny difficulties (Salamon 2003). Indonesian NGOs survived under Suharto and promoted democracy afterward, but to be more effective, they must modify their...
1 Pages(250 words)Essay

The Legitimacy of Global Warming

...﻿Global Warming is no hoax, it is happening and almost the whole world acknowledges it, those who do not acknowledge it are either ignorant or do not want to come to terms with reality. This essay will shed light upon evidence which clearly goes to show that global warming is actually happening and it is also having an adverse effect on the ozone layer and as a result of which the climate is changing for the worse. Here is some evidence to support the argument, “The average size of the 2012 ozone hole was 6.9 million square miles (17.9 million square kilometers). The Sept. 6, 2000 ozone hole was the largest on record at 11.5 million square miles (29.9 million square kilometers).” (Climate...
1 Pages(250 words)Essay

...Ispot TV on Diabetes Diabetes is one of the diseases that has affected a lot of people globally, the disease, normally results from a high amount of sugar level in the blood stream as a result of the failure of hormone Insulin, which is responsible for regulating the amount of sugar in the human body. According to research, the disease causes a large number of deaths annually and it is because of this reason that organizations have come out in large numbers campaigning on Diabetes and its effects. The numerous campaigns are in an attempt to create awareness about diabetes to people, some of who are not aware of the disease while others have the disease but do not know the proper medication procedures....
6 Pages(1500 words)Term Paper

What is political legitimacy

...Political Legitimacy Introduction Political legitimacy constitutes a fundamental condition for governing without which governments are exposed to legislative deadlocks and collapse. A political regime is characterized by legitimacy if its participants have certain beliefs or faith concerning that regime. Political legitimacy provides the basis for every system of authority to correspond willingly by virtue of which persons exercising authority are lent prestige. The main sources of political legitimacy include tradition, charisma, and rule rationality. Plato argues that theoretical authority is the foundation of legitimate practical authority, and is...
5 Pages(1250 words)Essay

Compare the function of IGOS and INGOS

However, in the modern culture, these organizations are playing an important role in the world politics by influencing the global security and peace through their global collaborative function and working for the social and economical development of the member states. These organizations perform their functions according to the rules and regulations of intergovernmentalism, which means that a complete harmony is required. Whereas, Non-Government Organizations (NGO) are developed by some private personnel for the welfare of the society, which can also be international in their scope. These organizations do not posses any sort of government accreditation and established merely on the basis of mutual agreements among different person...
15 Pages(3750 words)Essay

...Islam Struggles over legitimacy of leaders have occurred many times throughout Islamic history. at least three instances of struggles for legitimacy and the effect chosen leaders had in the Islamic world.  It is debated until now, the legitimacy issues of Muslims that were some of the most issues that came up during the 6th and 12th century. These, however, are still being debated in the modern Muslim world. There has arisen various opposing opinions from different sects and groups of the Islam over the legitimacy of the leaders found within Islam and throughout the Islamic history. This can be dated back to the first civil war after Ahmad was assassinated, there was a...
5 Pages(1250 words)Essay
sponsored ads
Save Your Time for More Important Things
Let us write or edit the literature review on your topic "'NGOs legitimacy and representation at the global level'" with a personal 20% discount.
GRAB THE BEST PAPER

Let us find you another Literature review on topic 'NGOs legitimacy and representation at the global level' for FREE!