Comments (0)
Add to wishlistDelete from wishlist
Cite this document
Summary
An author of the essay "Role of Women in Vietnam War" reports that women in Vietnam played several roles during the War period that contributed to the eventual results. This paper will discuss the various roles carried out by Vietnam women during the war…
Download full paperFile format: .doc, available for editing
HIDE THIS PAPERGRAB THE BEST PAPER98.6% of users find it useful 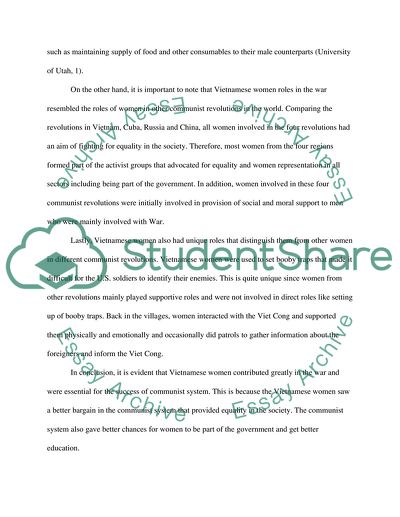 Extract of sample "Role of Women in Vietnam War"

﻿Role of Women in Vietnam War
Vietnam War, which was experienced between 1959 and 1975, was based on competition of economic ideologies between functions allied to the U.S., which supported capitalism and communist supporters. Communist ideologies support uniformity in the society where people contribute to a common goal where there is no social stratification. Women in Vietnam played several roles during the War period that contributed to the eventual results. This paper will discuss the various roles carried out by Vietnam women during the war and will also highlight how similar or different the roles were from women roles in other communist revolutions.
To begin with, Vietnam women contributed actively in different capacities during the period. According to Mobile Riverine Force Asociation [mrfa], about “7,484 women served in Vietnam, of whom 6,250 or 83.5% were nurses” and others were active combats in the war (1). Women also contributed in other areas such as supporting the agricultural sector so as to provide enough food for men who were busy fighting for independence.
Despite the visible contribution of women during the War period, gender inequality was the major factor limiting their full contribution. According to De Anza College, majority of women serving in the army as active combats were perceived as help mates rather than counterparts (1). There were reports that even the female soldiers did not get fair treatment and some of them experienced sexual harassment.
Other functions of women in the War included serving as couriers, patrol guides and activists to publicize various organizations. Women were also motivated to contribute to the war against foreigners in order to secure freedom and also fight for equality. Women also took advantage of gender stereotypes by foreigners to enable them achieve their intended objectives such as maintaining supply of food and other consumables to their male counterparts (University of Utah, 1).
On the other hand, it is important to note that Vietnamese women roles in the war resembled the roles of women in other communist revolutions in the world. Comparing the revolutions in Vietnam, Cuba, Russia and China, all women involved in the four revolutions had an aim of fighting for equality in the society. Therefore, most women from the four regions formed part of the activist groups that advocated for equality and women representation in all sectors including being part of the government. In addition, women involved in these four communist revolutions were initially involved in provision of social and moral support to men who were mainly involved with War.
Lastly, Vietnamese women also had unique roles that distinguish them from other women in different communist revolutions. Vietnamese women were used to set booby traps that made it difficult for the U.S. soldiers to identify their enemies. This is quite unique since women from other revolutions mainly played supportive roles and were not involved in direct roles like setting up of booby traps. Back in the villages, women interacted with the Viet Cong and supported them physically and emotionally and occasionally did patrols to gather information about the foreigners and inform the Viet Cong.
In conclusion, it is evident that Vietnamese women contributed greatly in the war and were essential for the success of communist system. This is because the Vietnamese women saw a better bargain in the communist system that provided equality in the society. The communist system also gave better chances for women to be part of the government and get better education.
Works Cited
De Anza College. Women, the Unknown Soldiers. n.d. Web.4 Apr.2014. < http://www.deanza.edu/faculty/swensson/bestresearch_womensoldiers.html>.
Mobile Riverine Force Asociation. Vietnam War Statistics. n.d. Web.4 Apr.2014. < http://www.mrfa.org/vnstats.htm>.
University of Utah. Vietnamese Women at War. Fighting for Ho Chi Minh and the Revolution. 2003. Web.4 Apr.2014. < http://www.kansaspress.ku.edu/tayvie.html>. Read More
Share:
Tags
Cite this document
(“Role of Women in Vietnam War Essay Example | Topics and Well Written Essays - 500 words”, n.d.)
Role of Women in Vietnam War Essay Example | Topics and Well Written Essays - 500 words. Retrieved from https://studentshare.org/history/1637750-how-did-vietnamese-women-participate-in-the-war-what-did-their-activities-have-in-common-with-women-in-other-communist-revolutions-how-was-it-different

CHECK THESE SAMPLES OF Role of Women in Vietnam War

...talented in the field and had the rare opportunity to serve in the war as actual soldiers along their male counterparts. The women showed unending efforts and desire to help their sides win. For the women that were not strong or rather skilled enough to go out to the field and face the rivals in a live manner, they were delegated different aspects of work according to their intrinsic skills. One of the most identified roles that the women were given was the work of clinical attendants or rather they were given the job description of nurses (Tunner 76). The nurses had the strict and strenuous jobs of assisting wounded soldiers at the time when attacks...
9 Pages(2250 words)Research Paper

...in the gulf of Tonkin in 1964. President Johnson retaliated by ordering air strikes on North Vietnamese naval bases. These served to increase attacks by the Viet Cong on the US personnel and their bases. In the beginning of 1965, eight Americans were killed and 106 wounded in an attack on the American base at Pleiku. In retaliation, Johnson ordered a series of strikes by naval carriers on North Vietnam. These strikes, codenamed Flaming Dart, were the beginning of the escalation of America’s role in the war. Realizing that the South Vietnamese army (ARVN) was unable to cope with the guerrilla tactics of the Viet Cong, America launched a series of bombing attacks on targets in North...
6 Pages(1500 words)Essay

.... Though the U.S. used the atomic bomb in Asia less than 20 years earlier, it deployed thousands of troops to the jungles of Vietnam during the decade-long ‘police action’ despite pleas by some that ground troops were necessary only after ‘the bomb’ was dropped in a clean-up role. The fiasco of Vietnam instigated an anti-military response from the majority of American citizens which contributed to the Cold War’s end. America was forced to redefine how its military would be employed and question its capacity to force it’s will in foreign countries such as Vietnam. America also had to examine its overall foreign engagement policy and ensuing strategies....
8 Pages(2000 words)Term Paper

...victories, because it severely affected the United States government's political will to wage war in Vietnam. Prior to the offensive, the Commanding General of the United States Military Assist Command Vietnam (MACV), General William Westmoreland, had stated that the war was winding down and that the United States could "see light at the end of the tunnel" (Oberdorfer, 271). Upon hearing news reports of massed communist attacks throughout Vietnam, the existing American public support for the war eroded further. In March 1968, upon hearing of General Westmoreland's request for 200,000 more American combat troops in...
8 Pages(2000 words)Essay

...the war was obviously political. He rushed to take credit for victories and deflect blame. He boasted that the soldiers couldn’t hit an outhouse without his permission, and he took an active role in planning. But in the end, the ROE was a political tool for him. He was concerned mainly with conducting the war so that the American people approved. References Lewy, G. 1978. America in Vietnam. (Oxford: Oxford University Press). Weider History Group. 2006. “Air Force Colonel Jacksel Jack Broughton & Air Force General John D. Jack Lavelle: Testing the Rules of Engagement During the Vietnam War” Retrieved from...
2 Pages(500 words)Essay

...of cooperation between the U.S government with her citizens in the middle of the war with a determined and organized opponent led to the inevitable defeat to America. The American citizens played a central role in the Vietnam War. It is during the war in Vietnam that America saw the greatest antiwar movements. The work of Howard Zinn, Zinn views the war in Vietnam in terms of failure and success. On one hand, Howard Zinn asserts that the American government failed and it was a victory both to the nationalists in Vietnam as well as the American Citizens who were opposed to the...
4 Pages(1000 words)Essay
sponsored ads
Save Your Time for More Important Things
Let us write or edit the essay on your topic "Role of Women in Vietnam War" with a personal 20% discount.
GRAB THE BEST PAPER

Let us find you another Essay on topic Role of Women in Vietnam War for FREE!